STANFORD
UNIVERSITY PRESS
The Woman Who Turned Into a Jaguar, and Other Narratives of Native Women in Archives of Colonial Mexico
Lisa Sousa 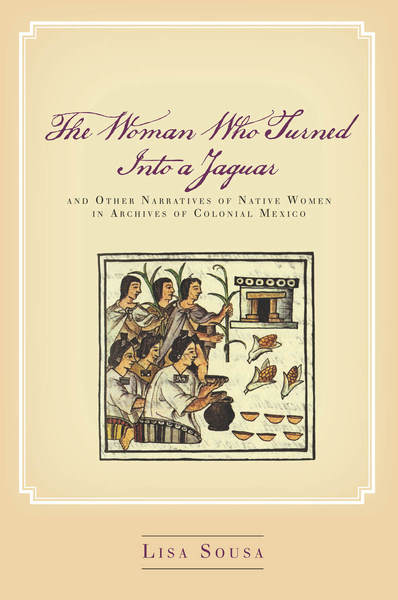 The Woman Who Turned Into a Jaguar, and Other Narratives of Native Women in Archives of Colonial Mexico
Lisa Sousa

Chapter 1 provides an introduction to major themes of the study and to the historical background of the indigenous groups of central Mexico and Oaxaca—the Nahua, Ñudzahui (Mixtec), Bènizàa (Zapotec), and Ayuk (Mixe) peoples—that are the focus of the book. The chapter lays out the dramatic changes that took place in native communities in the decades following the Spanish conquest (1519-21), including depopulation, sociopolitical reorganization, imposition of Christianity, and economic reorientation. Chapter 1 provides a general overview of social structure and gender relations in the post-classic and colonial periods. The Introduction places the work and its contributions in the context of the scholarship on colonial Mexican ethnohistory and Latin American women's history, and discusses the sources and methods used in the study.

2 Gender and the Body
chapter abstract

Chapter 2 draws on theories of the body, gender performativity, and dress, to show how gender was inscribed on the body to create the appearance of difference, which, in turn, shaped all social relations. The chapter analyzes aspects of indigenous gender ideology and concepts of the body as expressed in life-cycle rituals, native-language metaphors and terminology, and beliefs pertaining to the calendar, tonalism, and nahualism. The chapter argues that concepts concerning the fluidity of the body and gender identity undermined essentializing ideologies. The work examines the construction of gender through labor, drawing on Nahua and Bènizàa rituals as two central case studies. The chapter also considers clothing and adornment and speech and behavior, which served as mechanisms to stabilize the body and impose identity. Chapter 2 concludes with a discussion of cross-gendering which occurred when individuals adopted the dress, labor roles, and mannerisms of the "opposite sex."

Chapter 3 considers the encounter between traditional indigenous practices and Christian marriage in colonial highland Mexico. The first section examines differing nuptial concepts and ceremonies of indigenous groups and Spaniards, and considers ecclesiastics' attempts to promote indissoluble, monogamous Christian marriage as a cornerstone of the broader evangelization project. Special attention is given to how Spanish efforts to eradicate native practices of serial monogamy, polygyny, and divorce altered indigenous concepts and customs. The second part of the chapter examines how marriages were arranged and celebrated. It reconstructs indigenous weddings and traces the development of local native-Christian ceremonies, which incorporated some aspects of traditional rituals but significantly altered others. The chapter considers how the marriage encounter in colonial Mexico engendered conflict, compromise, and the creation of new practices.

Chapter 4 examines marital relations in indigenous communities of highland Mexico. The first part of the chapter reveals the social, political, and economic significance of marriage to shed light on marital expectations and obligations. The chapter also considers informal unions, and the circumstances that gave rise to these types of arrangements. The second section of the chapter examines marital conflicts and domestic violence that developed in failed relationships. Formal and informal attempts to resolve disputes illustrate cultural expectations and attitudes about one's rights within a relationship. The study reveals a complex process of negotiation among husbands and wives, their households, and local native officials, in which women sometimes aired their grievances before the community. Chapter 4 argues that the criminal prosecution of wife-beating suggests that domestic violence, especially when it was deemed excessive, was not condoned in indigenous communities.

Chapter 5 examines indigenous sexual ideology and attitudes based on the analysis of Mesoamerican metaphors and symbols that were used to discuss and represent sexual matters. The chapter shows that the principal concern in these texts was the necessity for moderation in sexual relations. Excessive intercourse, adulterous relations, and the use of aphrodisiacs could all lead to impotence, illness, and violence. Flowers, food, feathers, speech, and sight were invoked in metaphors and as symbols to represent sexuality in alphabetic and pictorial texts. They continued to resonate in the narratives and actions of indigenous people in colonial times. Chapter 5 considers how Spanish friars adopted some indigenous concepts in their efforts to promote Christian morality, and in turn how Spanish mores, Christian teaching, and colonial law affected native sexuality. The chapter argues, however, that Spanish Christian values regarding morality and sexuality influenced, but did not completely change, indigenous attitudes and practices.

Chapter 6 studies sexual attitudes and crimes, including adultery and rape, and their prosecution in preconquest and colonial times. Indigenous peoples themselves, not strictly friars, enforced a moral code of sexual behavior by gossiping about local scandals, reporting crimes to indigenous and Spanish magistrates, testifying in criminal trials about alleged transgressions, and in more extreme cases, resorting to violence, often with the help of relatives and friends, to punish misconduct. The chapter considers the ways in which indigenous and Spanish attitudes converged, especially in the importance placed on marriage as an institution that regulates sexuality and the strong condemnation of rape and adultery. Chapter 6 examines the relationship between sexual infidelity and violence in the household and community. Finally this chapter shows how Spanish attitudes regarding virginity and honor influenced, but did not alter entirely, indigenous gender ideology after the sixteenth century.

Chapter 7 addresses the gendered division of labor at the household and community levels. The chapter examines women's roles as weavers, craftpersons, producers of food and beverages, midwives and healers, community leaders, merchants, and agriculturalists. Chapter 7 challenges the gendering of "public" and "private" space that is implied in prescriptive texts by showing that women's duties took them out of the household on a daily basis, and that men, especially craftsmen, frequently worked within the home. It also considers how increasing Spanish demands for labor and tribute and the development of a money economy shaped women's roles and status. The chapter argues that, in examining various facets of women's work, it becomes evident that Spanish policies contributed to the slow erosion in women's status overtime. But Spanish pressures did not fully succeed, for underlying concepts of gender parallelism and complementarity were at the core of social organization and household relations.

Chapter 8 investigates relations within the household, focusing on family organization, ritual kinship, and residence patterns. Members of the household, whether blood relatives or not, formed a family, who were united by their collective experiences of working and living together. Marriage and ritual kinship formalized ties between households, while informal arrangements were sustained by mutual support, collaborative labor, and shared resources. The chapter explores the economic, social, moral, spiritual, and political dimensions of the household. Chapter 8 argues that household and community were two interrelated spheres, and that women were often at the center of social, economic, and political interaction. The chapter also examines how ritual kinship created multidimensional webs of relations among households and provided important social networks for women.

Chapter 9 studies women's participation in public protests and acts of civil disobedience, including riots. It shows how threats to the integrity of the household and community, such as increased demands for tribute and labor, disputes over land and natural resources, and Spanish attempts to remove local officials from office, led men and women to seek legal redress, to protest, and at times to rebel against colonial authorities. The chapter traces women's efforts to organize acts of resistance, such as the refusal to pay tribute, and their leadership roles in local riots. While women did not hold political office, they were aware of controversies over lands, resources, and legal suits to protect these assets. Chapter 9 argues that women's participation in efforts to defend their homes, communities, and allies reveals a broader consciousness that has been overlooked or underestimated in previous studies.

The concluding chapter reiterates the book's major arguments and places the study's contributions within the context of the existing scholarship on Mesoamerican ethnohistory and women's history. The chapter considers the evidence for both major changes and continuities in indigenous social and gender relations in rural communities of central Mexico and Oaxaca between 1520 to 1750. The chapter argues that many factors over time contributed to the erosion of native women's status. Nevertheless, women responded to the many challenges that they faced to defend their interests, as well as those of their households and communities.