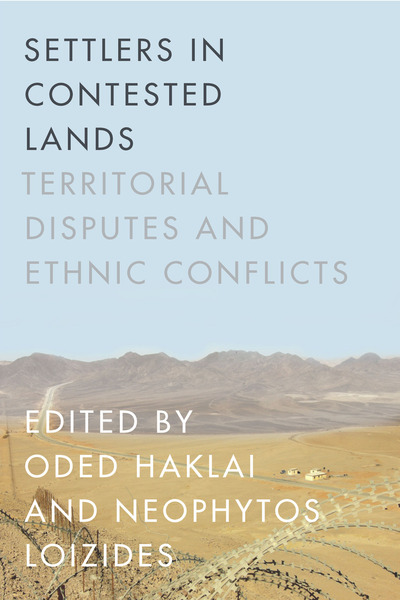 Settlers and Conflict over Contested Territories

Now, Israel is going to have to take some difficult steps as well, and I shared with the [Israeli] prime minister the fact that under the roadmap and under Annapolis, there is a clear understanding that we have to make progress on settlements. Settlements have to be stopped in order for us to move forward. That’s a difficult issue and I recognize that. But it’s important and it has to be addressed.

Less than two years after pressuing a resistant Israeli government to halt all settlement activities, the administration of the United States abandoned its demand. Proponents of a halt to settlements were dismayed by this about-face and denounced the recalibrated policy. In retrospect, it appears that the newly elected Barack Obama may not have fully appreciated just how thorny the settlement issue was, despite recognizing its political significance.

Settlements in contested territories are by no means unique to the Israeli-Palestinian conflict. In fact, they have presented major challenges in many conflicts around the world in the contemporary era. To name only a few, the ramifications of settlers from Turkey in Cyprus remain a central concern in ongoing negotiations over the future governance of the island; Luzon settlers in the Mindanao islands of the Philippines are a profound source of contention; the future of French settlers in Algeria proved to be one of the toughest obstacles the French government had to overcome when it sought to withdraw from its North African colony; and Javanese settlers in Aceh, Arab settlers in Kurdish populated parts of Iraq, and Chinese settlers in Tibet have all been viewed as significant aspects of inter-communal and inter-nation conflicts.

That settlers and settlements will cause contention is not a given, however. Population movements from one part of the world to another have characterized much of modern history. In many instances, especially in Anglo-Saxon settler societies, migration is celebrated as a source of cultural vibrancy and a desirable resource for a cosmopolitan society (Pearson 2001). Elsewhere, for instance, in the Baltic Republics, the presence of settlers has been initially contested by indigenous populations, but the latter have gradually, if reluctantly, come to accept Russian speakers as permanent inhabitants (Laitin 1998; Hogan-Brun et al. 2008). At the same time, there is little doubt that in many instances, population movements referred to as settlements, particularly those on a large scale, are accompanied by protracted, sometimes violent, ethnopolitical conflict.

Relationships between “old” and “new” populations have been examined from several angles, with immigration and “sons-of-the-soil” literatures often providing contrasting evaluations of relationships between “newcomers” and “indigenous” groups. On the one hand, immigration studies emphasize that newcomers, particularly migrants, almost never fight civil wars. Kymlicka (1995, 67–68) and, more recently, Laitin (2009) argue that international migrants are less likely to mobilize for self-government or other political reasons and are almost never implicated in civil war violence, even when they face security threats in their new communities. Ultimately, however, there is a significant analytical distinction between immigrants “effectively permitted” into a non-disputed territory and settlers introduced, as we argue in this volume, purposefully, with the explicit aim of gradually transforming patterns of sovereignty in a disputed region.

Sons-of-the-soil studies, on the other hand, emphasize hostile relations between migrants and native populations. Fearon (2004) and Fearon and Laitin (2011), for example, argue that sons-of-the-soil conflicts engender the most protracted civil wars worldwide. This literature typically focuses on domestic population movements involving the migration of members of one or more ethnic groups into a region inhabited by a different ethnic group in search of better material opportunities. Ensuing conflicts are, thus, generally understood to be primarily about scarce resources. To the extent that sons-of-the-soil conflicts invoke identity, it is usually only in an instrumental way, to serve the interests of self-utility maximizing (and mobilizing) elites.

Thus far, the politics of settlers and settlements in contested territories has not been studied as a principal phenomenon in its own right. Considering that settlements have been a conspicuous feature of many protracted conflicts around the world, the scarcity of comparative and theoretical studies published on this topic is puzzling. Settlements, as this book shows, are a distinct phenomenon whereby demographic engineering is put into play in order to consolidate territorial control, and where identity questions often play a primary role. Indeed, as Ron Hassner (2006/07) usefully demonstrates, in many protracted conflicts over territory, the disputed territory actually has little material value.

The remainder of this introductory chapter provides the comparative framework of analysis for the rest of this volume. Our overarching purpose in this book is to provide a comparative investigation of how settler-related conflicts have unfolded in different parts of the world, identify common patterns and case-specific peculiarities, and generate insights into this highly important phenomenon. There is much to be learned by comparing and contrasting the ways settler-related conflicts emerge, evolve, and resolve (or not). Why and how are settlement endeavors initiated and pursued? How do sending states and settler populations respond to ensuing conflicts in the settled contested territories? How do the relations between sending states and their settler populations transform over time, particularly if their preferences diverge and the sending state reassesses its settlement policies? Bringing together cases from around the world with many similar characteristics as well as revealing differences, this book’s various chapters address these interrelated questions. Ultimately, settlers may not be the only factor fueling protracted conflicts over territories—but their influence is certainly powerful.