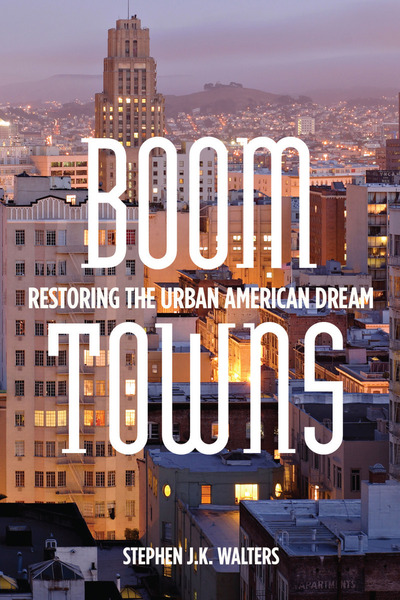 The decline of many American cities in the second half of the twentieth century is commonly blamed on forces that seem hard to reverse, at least at the local level: racism that causes white flight, globalization that fuels de-industrialization, and a taste for low-density residential environments. This book presents a more hopeful view, arguing that the traditional narrative has overlooked some crucial determinants of urban vitality, and that with proper attention to these fundamentals any city can thrive and enhance their residents' welfare. It presents cities as dense concentrations of capital in all its forms – physical, human, and social – that attract people and make their labor and leisure time more productive and fruitful. Cities that encourage the formation of such capital by protecting their residents' private property rights and efficiently managing the property that their citizens own in common with each other will, therefore, be far healthier than those that do not. Through historical illustrations and contemporary case studies, the book details policies that have both succeeded and failed in this regard, offering concrete and politically practical suggestions for policy reforms relating to taxes, regulation, management of common property resources and public services, and the planning process.

1 What We've Lost – and Why
chapter abstract

This introductory chapter discusses how cities attracted residents and helped them prosper in the first half of the twentieth century, documents their decline in the second half, summarizes the held theories on this decline, and argues that these theories — though not wrong – are seriously incomplete. It views cities as rich concentrations of tangible and intangible capital and holds that policies which protect the property rights of the owners of this capital crucially affect urban vitality and the welfare of city residents. Accordingly, it offers a hopeful message: that any city can engage in policy reforms that will make it more attractive to capital formation and enhance residents' living standards and quality of life.

Boston's infamous mayor James Michael Curley is highlighted as a practitioner of "Robin Hood politics," in which tax policy is used to redistribute wealth or income from disfavored to favored interest groups. Employing this strategy at the local level can lead to considerable geographic re-arrangement of population over time – i.e., flight by those who see no commensurate increases in public services accompanying the higher taxes they pay. Numerical examples illustrate the wealth losses to owners of capital arising from redistributive policies, and historical data documents the adverse long-term consequences for laborers (who partner with physical capital in the production process) of the flight of capital from urban locales.

3 A One Percent Solution
chapter abstract

The causes and consequences of statewide property tax revolts in California and Massachusetts in the 1970s are examined. The dynamic effects of these voter-imposed cuts in tax rates are chronicled. These effects are sufficiently strong that they suggest a means by which cities may reduce tax rates on productive capital and reverse capital flight without forcing draconian (and politically risky) cuts in near-term spending: a "cash on delivery" plan in which rate cuts that take effect at a future date certain immediately produce new investment and increases in property values that enhance tax receipts that are banked to defray the costs of the future rate cuts.

4 The Conquest of Capital
chapter abstract

The UAW's historic triumph over GM during its 1937 sit-down strike is examined to demonstrate the ability of unions to increase the returns to labor and reduce returns to capital via both monopoly pricing and opportunism. A numerical example is used to illustrate the latter practice, in which specialized assets are taken hostage and some of their value appropriated. To avoid such appropriation, however, the owners of capital may redeploy their assets to more defensible locales; if these are in low-density, more isolated settings, the result will be a loss of agglomeration economies and less healthy enterprises and host cities. Data are presented which suggest that increased rates of unionization are associated with lower (often negative) rates of city income growth.

The evolution of the steel industry – from the highly capital-intensive and vertically-integrated methods of U.S. Steel to the mini-mills pioneered by Nucor – is examined in order to document the consequences of unions' opportunistic behavior and firms' strategic responses. Data are presented to illustrate the migration of productive capital out of cities in which its owners' property rights are more tenuous, and toward locales in which labor law and other regulatory policies make appropriating the returns to capital somewhat more difficult. States' right to work (RTW) laws are discussed as proxies for more encompassing and precise measures of their climate for capital investment. Cities in RTW states (e.g., Charlotte, Boise, and Oklahoma City) are examined as case studies.

New Orleans' history of shortsightedness with respect to maintenance of its crucial flood management infrastructure, which contributed to the tragic loss of life attendant to Hurricane Katrina in 2005, highlights some problems inherent in government ownership and management of public goods. Reasons for (and evidence on) widespread deficiencies in capital maintenance in the public sector are presented. Then a method for privatizing the management of key public infrastructure – franchise bidding – is outlined and the evidence on its effects and practicability is assessed.

Since private management of collectively-owned assets will be not be desirable or politically feasible in all cases, this chapter suggests means of improving the efficiency with which government manages its assets and provides services. Bringing competitive bidding – dubbed marketization – to functions traditionally conducted by government monopolies can reduce costs and enhance quality. Exploiting scale economies by expanding the reach of some government agencies across political boundaries also has potential to cut costs. And avoiding "lying prices," which convey false information to consumers and skews their choices, will enable more efficient decisions about citizens' use of public services or facilities. Evidence is presented on some cities' experiences with unified government, congestion pricing of roads, and educational vouchers.

The historical record on cities' attempts to improve their citizens' welfare by taking and clearing so-called blighted areas and constructing publicly or privately owned and/or managed projects on these sites is not encouraging. This chapter outlines that history and explains the reasons for the disappointing results. The destruction of social capital and the misallocation of physical and financial capital attendant to renewal efforts that involve the use of eminent domain and development subsidies are discussed, and an example of large-scale privately-organized redevelopment is highlighted.

This chapter begins by outlining how and why many cities have, over time, regulated land use and the built environment ever more tightly – in contrast to the recommendations of Jane Jacobs, who stressed the importance of "spontaneous order" and "unofficial plans" in well-functioning neighborhoods. In particular, growth management policies aimed at enhancing environmental quality and preserving open space are described, and their effects on equity and efficiency are analyzed. Means to address housing affordability problems that often arise from growth controls, such as inclusionary zoning, are evaluated. The chapter concludes with a discussion of Houston's comparatively light hand with respect to zoning.

A vast proportion of the capital that enables cities to function – e.g., its streets, sidewalks, and parks – is owned communally. These areas may therefore be subject to a "tragedy of the commons" in which some residents misuse public property and limit its utility for others. This chapter focuses on how cities have coped – for better or worse – with the subtle but important issues related to the proper specification and enforcement of property rights in such circumstances. First, various policing techniques are described and evaluated for their effects on citizen safety and social wellbeing. Second, the problem of homelessness and its relationship to policies related to mental health is discussed. In both cases, suggestions for best practices are advanced.

This chapter summarizes the book's main theses and offers ten guiding principles for policy reform. Cities can greatly improve their viability by resisting excessively redistributive policies, defending the property rights of owners of physical capital, being far-sighted regarding maintenance of crucial infrastructure, sending honest price signals to consumers of public goods and services, encouraging competition among potential providers of public services, partnering with neighboring jurisdictions to exploit scale economies in government functions, avoiding inequitable and inefficient controls on growth, limiting the size and scope of planning bureaucracies, and maintaining order in public spaces with efficient policing and homelessness policies. It is argued that all cities are capable of becoming or remaining "boom towns" if they observe such guidelines.