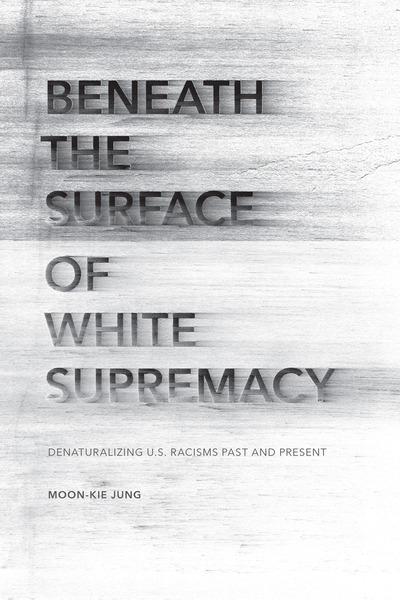 Beneath the Surface of White Supremacy
Denaturalizing U.S. Racisms Past and Present
Moon-Kie Jung

This introductory chapter begins with a close description and analysis of the homicide of an unarmed Black teen in Champaign, Illinois. On October 9, 2009, the police shot and killed Kiwane Carrington outside a friend's home where he was staying. The officers involved were never charged, much less convicted. The chapter attempts to defamiliarize what has become all too familiar and discern the racial common sense that prevailed in the case. Through this particular example, it raises a multitude of general questions about the workings of racism that the rest of the book takes up.

Chapter two outlines a new theory of racism, an indispensable, if deeply fraught, concept in the social sciences. It builds on Eduardo Bonilla-Silva's structural theory of racism and William Sewell Jr.'s theory of structure. The former goes a long way toward denaturalizing commonsensical views on racism by stressing its structural character. Insightful in myriad ways, it is hindered by an unsatisfactory concept of structure. Integrating, critiquing, and extending Sewell's more cultural and historical understanding of structure, the new theory addresses a number of thorny issues, including scale, meaning, consciousness, and change. To do so, it distinguishes between dominant and subaltern positions, discursive and nondiscursive practices, and performative and reflective discourses. Foregrounding the practical over the representational, the restructured theory squares a host of seemingly contradictory theories and findings in the social-scientific study of racism.

3 The Racial Constitution of the U.S. Empire-State
chapter abstract

Against the universal assumption that the United States is and has been a nation-state, chapter three contends that the United States has always been an empire-state, a conceptual shift with potentially sweeping implications. Notably, the reconceptualization provides a firmer basis for understanding the United States as a racial state, requiring none of liberalism's contortions of the past and false promises for the future. For its empirical analysis, the chapter turns to constitutional law of the long nineteenth century. It demonstrates how U.S. state formation has always entailed the racial construction of colonial spaces. Tracing the strange career of Dred Scott v. Sandford, the notorious Supreme Court case associated almost always with slavery and almost never with empire, it argues for a unified framework to analyze the different but linked histories of racial subjection, including those of Asians/Asian Americans, Blacks, Latinas/os, Native Americans, and Pacific Islanders.

Chapter four scrutinizes the current social-scientific literature on immigration and immigrants. Over the past two decades, immigration scholars have revitalized assimilation theory to study the large and growing numbers of migrants from Latin America, Asia, and the Caribbean in the United States. Neoclassical and segmented assimilation theories seek to make sense of this current wave of migrants and their offspring that differs in important ways from the last great wave at the turn of the twentieth century. They also recognize and try to overcome the conceptual shortcomings of earlier generations of assimilation theory. Yet the new theories continue to misconstrue race by assuming precisely what should be dissected: the "nation-state" and structures of inequality and domination. Shifting the focus from difference to inequality and domination, the chapter proposes a fundamental reorientation in our theoretical approach, from assimilation to the politics of national belonging.

5 Symbolic Coercion and a Massacre of Filipinos
chapter abstract

Chapter five investigates a mostly forgotten massacre that took place in Hawai'i on September 9, 1924. During a protracted strike of Filipino sugar workers, the police shot and killed sixteen strikers on the island of Kaua'i. The incident hardly registered, failing to arouse among non-Filipinos sympathy or questions of legitimacy. How is such immediate consensus in defense of state violence formed? Incorporating W. E. B. Du Bois's concept of double consciousness, the chapter puts forward a critique of Pierre Bourdieu's social theory that challenges his overreliance on the tacit consent of the oppressed as the source of legitimacy. Exposing clear evidence of Filipino strikers' oppositional discourse and practice that went ignored, it proposes the concept of symbolic coercion that refers to the tacit nonrecognition by the dominant.

6 Symbolic Perversity and the Mass Suffering of Blacks
chapter abstract

Chapter six proffers the concept of symbolic perversity, the paradoxical but pervasive phenomenon of the relatively powerful's ignorance of their own knowledge. Despite the prevailing liberal notion that the dominant, like all people, would act justly if they knew about this or that injustice, the chapter underscores the idea that they know plenty but tacitly ignore this knowledge that they themselves produce and consume. This deeply patterned ignorance follows a racial logic that devalues the suffering of certain categories of people. To illustrate, statistical and textual analyses of the New York Times, a dominant institution, and its handling of unemployment data produced by the federal government, another dominant institution, are undertaken. The findings on Black unemployment and its news coverage fly in the face of conventional wisdoms that racism in contemporary United States is hard to detect and that nearly everybody believes in racial equality in principle.

This concluding chapter draws out some of the book's main implications for theory and politics of race through a reflection on the social thought of James Baldwin. It highlights the many points of convergence between the book and Baldwin's ideas, including emphases on history, relations of power, social unconscious, ignorance, immanent critique, violence, chimera of assimilation, and radical change. It also discusses two points of divergence: the need to recognize qualitatively different racisms and the incompatibility of radical antiracism and "America."