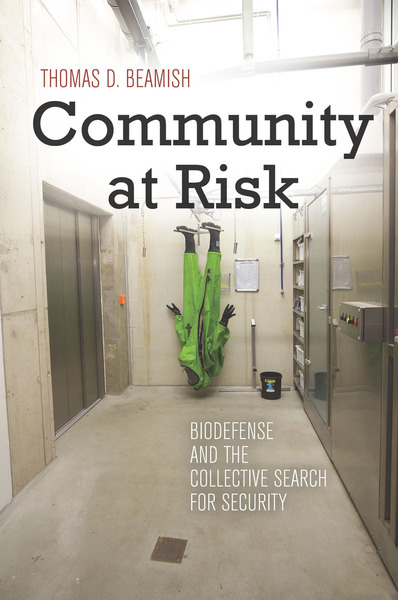 Community at Risk
Biodefense and the Collective Search for Security
Thomas D. Beamish

The Introduction develops the context within which the federal government's biodefense plans emerged and on which they were justified, including 9/11, the anthrax attacks, and the successive menace presented by West Nile virus, SARS, and avian influenza and most recently Ebola. After discussing the context and moral panic that ensued over terrorism, which were used to justify the new federal biodefense agenda, the Introduction then turns to local manifestations of those plans and responses to them–the community cases whose civic responses are comparatively explored in Community at Risk. The Introduction then develops key terms and concepts that are relied on to investigate and understand the community cases as well as the research strategy deployed to gather relevant data, analyze it, and draw conclusions. The Introduction ends with a brief summary of how the book is organized by chapter.

Chapter 1 explains the theoretical backdrop and analytical framework that organize the book's analysis. The chapter begins by outlining contemporary conditions in risk society where societal relations among civil society, government, and industry have been transformed in the twenty-first-century United States. In this context, risk and its management at the individual, local, and national levels have become the predominant concerns and bases for "risk dispute." Chapter 1 also describes how previous scholarship has theorized risk management and risk perception, as well as civic and community engagement and risk dispute. The chapter ends with how Community at Risk contributes to this and related areas of research.

Chapter 2 sets up the analysis pursued in subsequent chapters. It does so through a focus on the "risk communication" strategies deployed by local universities that sought to secure funding and support for their bids for an NBL. It was in those strategies that the local civic dialogue began in each civic and community context. It is in part the great similarity in risk communication strategies, coupled with variable local response, that makes comparing them so informative. Chapter 2 provides an important justification for the book's comparative argument: that variation at the community level was mostly a function of local civic dynamics, not distinctive university risk communication strategies. In the context of established civics and discourse, even an issue like biodefense, while "new," was locally understood via events, experiences, and beliefs that were a priori to it, requiring an analysis of such civic dimensions to apprehend and explain local response.

Chapter 3 empirically examines the risk dispute that erupted in Davis, California, and how the community's style of home rule civics and discourse shaped local deliberations regarding the University of California–Davis's (UCD) biodefense plans. The chapter develops the role that Davis's civic and political history has played in generating a field of political relations and set of value claims that heavily influenced civic dynamics in town. The chapter specifically focuses on the political-cultural resources mobilized to justify local opposition in the risk dispute surrounding UCD's biodefense ambitions, while also addressing the counterclaims of those who supported the university and its plans. Chapter 3 demonstrates that the claims levied in the risk dispute emerged from a specific civic and political legacy; they were not new, although they targeted a new technology and risk management plan.

Chapter 4 relates response in Roxbury, Massachusetts—a section of Boston where a group formed in opposition to Boston University's bid to host an NBL. Civic partisans there invoked a direct action style of civics and discourse reflective of local civic history, ongoing civic relations, and resonant civic virtues. In this context, the NBL was regarded as an environmental injustice insofar as its placement in Roxbury reflected the political disenfranchisement of neighborhood residents based on their race and class positions. Risk acceptability and dispute therefore echoed social and political history in which de facto segregation, municipal neglect, and ongoing marginalization of the neighborhood's minority residents left them suspicious of both "white" trustee institutions and those from outside their neighborhood. Chapter 3 demonstrates that in Roxbury claims making emerged from a specific civic and political legacy where claims were not new even if the proposed NBL was.

Chapter 5 empirically assesses civic response in Galveston where a managed civics and discourse predominated, wherein the civically engaged mostly downplayed the risks posed by federal biodefense plans and a local NBL and, instead, emphasized its possible contributions to their island's and the nation's—even the world's—"progress." Residents expressed little of the skepticism shared in the other cases and mostly faith in the power of humankind, with the aid of enlightened leadership, scientific knowledge, technology, and economy to progressively improve and reshape their island community for the better. As with the other cases, Galveston's civically engaged relied on claims and justifications that emerged from a specific civic and political history. That legacy and the civic relations, conventions, and virtues associated with that history helped ease locals toward accepting and eventually embracing biodefense plans and an NBL as an asset to both them and their collective future on the island.

The Conclusion provides a synoptic comparative account of the book's findings, arguments, and conclusions. The focus is what an analysis of local civics politics lends to an understanding of risk disputes. Importantly, the Conclusion, in focusing on the civic politics of risk, shows that common political rhetoric(s) such as claims to democracy, due process, progress, and justice can mean very different things in different civic contexts that hold considerable consequence for understanding what is and is not an acceptable risk. The same terms can mean very different things given social, historical, and material legacies and the civics and discourse that locally predominate. The Conclusion also reiterates the contribution that Community at Risk makes to an impressive stock of knowledge concerning risk management, perception, and dispute, as well as civic politics, organization, and community studies. The Conclusion's intervention is, however, equal parts new findings and synthesis.