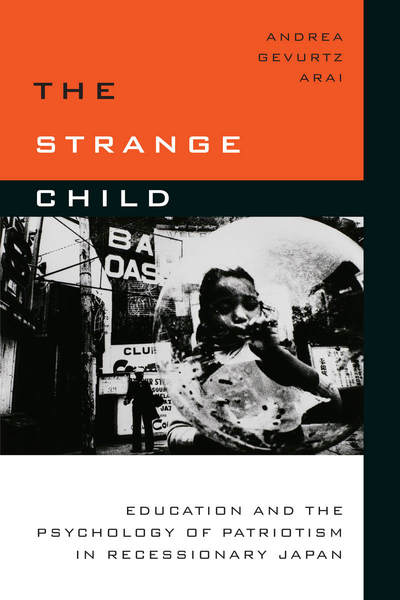 Erratum
Excerpt from the Introduction

If we do not know what a child is, then it becomes impossible to invest in their sweet self-evidence, impossible to use the translucent clarity of childhood to deny the anxieties we have about our psychic, sexual and social being in the world.1

If the conduct of individuals or collectivities appeared to require conducting, this was because something in it appeared problematic to someone. Thus it makes sense to start by asking how this rendering of things problematic occurred. . . . It suggested that “problems” are not pre-given, lying there waiting to be revealed. They have to be constructed and made visible, and this construction of a field of problems is a complex and often slow process.2

Words such as “self-responsibility” are beginning to circulate without being scrutinized thoroughly for their conceptual integrity and their applicability to Japanese society . . . How should Japanese people live in an era in which each individual independently should take risk and take responsibility for his or her action is a contradiction but no one points that out.3

This is “the world of recession,” she said with a heavy sigh. In the winter of 2007, in an up-and-coming residential area about thirty minutes from the center of Tokyo, a long-time acquaintance and I stopped at a bank machine around the corner from her home. Carefully shielding the number pad as she entered her “secret number” (pin), she cautioned me to do the same. In a country renowned for its lack of crime, her personal security concerns surprised me. Noticing this, she explained, “Secret number thefts are on the rise. This is the world of recession—nothing is as it used to be.”4 This woman’s description of the recessionary period that began in the early 1990s epitomized a new sense of social “unease”—an early keyword of recessionary Japan. How a capitalist society had appeared, or had been made to appear, so certain and secure and was now experienced as unfamiliar and uneasy is one part of the ethnographic story this book relates.

“Common sense is not the rule anymore,” another friend and mother I had known since the beginning of my fieldwork in 1999 exclaimed around the same time. Using the example of a parent participation day at her children’s elementary school, she described with dismay how other parents focused only on their own child’s needs. For this woman, and many others with whom I spent time during my decade and a half of fieldwork, which began with what was called “the child problem” (kodomo no mondai),5 shifting parental attitudes toward the school and their own child, often encoded as nationally Japanese, were another sign of the nothing-is-as-it-used-to-be uncertainty and strangeness of the recessionary period.

The opening epigraphs by Jacqueline Rose and Hirokazu Miyazaki point to the specificity of recessionary unease and uncertainty, how and why it took the form of the child problem, and the multilayered effects of which the child problem is a part. These effects transformed the early twenty-first-century language of commonality and requirements for individual development. In Imagined Communities, Benedict Anderson famously conceptualized the sense of commonality on a national level with others we shall never know or meet but about whom we have complete confidence in the simultaneity of their existence and activity as “the deep horizontal comradeship of the imagined community of the nation,” even as that horizontality is not borne out in income or opportunity.6

In a poignant commentary on late twentieth-century Japanese national imaginings and community, the late Masao Miyoshi used the unlikely notion of “uninteresting” to describe the form of horizontal comradeship of late twentieth-century Japan. For Miyoshi, the uninteresting referred to the production of a certainty and knowability beyond question and critique; a totalized and standardized experience of nation and culture, fused and dehistoricized. Miyoshi emphasized the importance of understanding the history of that certainty production, a product of intertwined domestic and international discourses, actions, and contingent events, in order to understand the effects of and on the present.7

As Rose emphasizes, the child and childhood are representational forms of the modern subjects’ desire for certainty, as much as childhood and children are names for the time and spaces of development of a diverse group of younger human beings. As a representational form, the child is a composite and often contradictory figure, standing for potential and promise as well as deficit and danger. In both of these senses, the child has been employed as a metaphor or symbol of progressive development and developmental time or its inverse, stagnation and failure. Rose’s linking of adult certainty to knowing what a child is provides one key to what follows here. The child problem of late 1990s Japan was a contingent effect. It emerged out of global historical crossings of knowledge about national identity, cultural difference, and the relation between the two. It was a powerful representation of the outmoding and recessionary replacement of the all-too-certain educationally managed credential (gakureki) society and the identity discourse of dependency.8

In 1989 through 1991, the Nikkei Stock Exchange fell by 60 percent from a high of 38,916 in 1989 to a low of 11,819 by 1991. Japan’s gross domestic production followed suit, declining precipitously. From the famed double-digit growth of the 1960s through the mid-1970s, and a steady 4 percent annual rate during the 1980s, economic growth dropped to 1.5 percent by the year 2000 and dropped to negative rates by the time of the September 11, 2001, attacks in the United States.9 As Japanese banks and businesses began to fail—for the first time since the Great Depression of the 1930s—terms of financial instability and failure, like bankruptcy and restructuring, identified in Japan with other countries like the United States and China, began to appear with regularity in the Japanese news. The financial plummet was met with domestic and international disbelief. It’s just a correction, wrote many international economists at the time; the Japanese will figure it out. When figuring it out macroeconomically with large amounts of government spending did not correct the downward cycle, interest on large risky loans that had been freely allowed during the heyday of Japanese capital surpluses compounded, and that which had seemed so certain and knowable—economic success naturally emerging from the predictability of an educationally managed dependent psychology life course—began to seem insecure.10

The financial downturn of the early 1990s, which led to a decade-and-a-half–long recession, constricting of the job market for young adults and restructuring of the lifetime employment system, set the stage for the unease and related effects that I uncover here. Yet, it is important to note that the recessionary unease, the forms it took, and the effects that were produced did not occur all at once. The child (of the child problem), a deeply naturalized representation of national identity and temporal insecurity, made visible a problem while obscuring the history and complexity of the problem’s creation. Moreover, this focus on the child deferred questions about the conditions for the production of certainty and seeming prior lack of precarity that had characterized representations and experience of late twentieth-century Japan. In this book, I uncover a process of social reengineering, enacted through the coming together of education and psychology, the making of problems, and a process of recoding, transforming, and translation of key concepts of national identity and certainty that manage and redirect what the recession laid bare.

What focused recessionary unease on the child and caused the education establishment and psychological experts to emerge at the forefront of national solutions for a problem that was part media generated and part a conjuncture of political economy and cultural anthropology began with a violent incident in 1997 perpetrated by a fourteen-year-old junior high student. In the spring of 1997, a junior high student in the city of Kobe, known only as Youth A (Shōnen A), an anonymity mandated by Japanese juvenile justice law, murdered and decapitated a sixth grade boy. As the result of a note left on the dead child’s body, diaries written, and letters penned to the local newspaper, all suggesting a mature assailant, it took several months for the police to identify the perpetrator as a local youth. As soon as the age of the assailant was revealed, the media descended on Kobe, staying months, interrupting daily life, and ruining property values, as the head of the neighborhood association told me. The media began to describe this violent “heinous” crime as the act of an “ordinary child,” elevating concern about strangeness of the formerly certain and secure middle-mass, middle-class Japanese ordinary.

1. Jacqueline Rose, The Case of Peter Pan or the Impossibility of Children’s Fiction, xvii.

4. The Japanese for world of recession is fukeiki no yo. Unease is my rendering of the Japanese fuan.

5. The Japanese term mondai, or problem, has been used in similar ways in other critical contexts, as Ken C. Kawashima shows in his analysis of “the Korean problem” (chōsenjin mondai) and history of Korean workers in interwar Japan. See Ken C. Kawashimam, The Proletarian Gamble. The “Okinawa mondai” is another example. As Rose and Miller state in the opening quotation, problems become visible by being rendered problematic.

7. Miyoshi’s essay, “Japan Is Not Interesting,” ends as Japan slides into long-term recession and Western interest moves to China and later South Korea. See Ann Anagnost, “Introduction: Life-Making in Neoliberal Times.” In the area of education, the comparisons have drastically shifted from Japan to China and South Korea. See Nancy Abelmann, Jung-Ah Choi, and So Jin Park, No Alternative?; Se-Woong Koo, “How South Korea Enslaves Its Students”; and Helen Gao, “China’s Education Gap.”

8. In the following I discuss at more length the position that the notion of dependent identity occupied in a vast genre of writing about Japanese character and personality in the 1970s and 1980s known as Nihonjinron (discussions about Japaneseness by Japanese writers).

9. Takatoshi Ito, “Retrospective on the Bubble Period and Its Relationship to Development in the 1990s.”

10. Japan was the single largest bankroller of U.S. debt at the time.