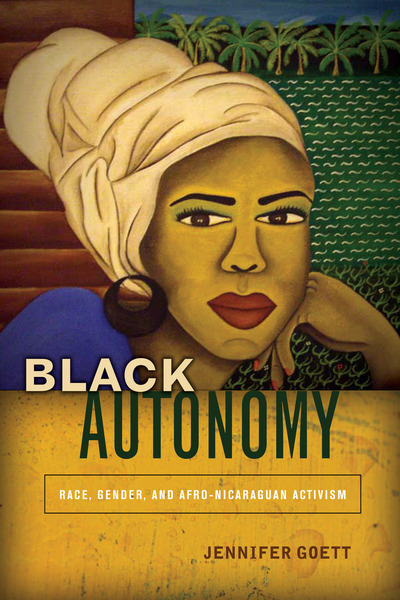 This chapter provides an introduction to Monkey Point, including a discussion of the feminist activist research methodologies used. It contextualizes community activism within debates about ethnic autonomy regimes in Latin America and develops new theoretical insights on the relationship between security and capitalist intensification in postwar Nicaragua. Specifically, the chapter locates the emergence of a politics of black autonomy within wider processes of postwar governance. It analyzes the transition from the neoliberal right to the socialist left in 2007, arguing that there has been a shift in political discourse, but clear continuities in capitalist development and security policy. The chapter ends with an overview of the book, which is broadly chronological, beginning with women's mobilization in the late 1990s and ending with resistance to military occupation in the early 2010s.

This chapter examines the community's past via the oral histories of three women elders who led the first wave of land rights activism in the late 1990s. It shows how diasporic subjectivities rooted in social memories of slavery, migration, and race, class, and gender oppression drive community activism for autonomous rights.Accounts of racialized domestic servitude and labor run throughout the stories, providing a narrative thread that links six generations of community women. Each woman tells these histories in ways that are both politically strategic and pedagogic in the present. For instance, they represent female ancestors as forceful political agents and, in doing so, shore up their own leadership positions, which are often contested by community men.They make race, class, and gender subordination visible as past sites of struggle, and thus urge younger generations to embrace these expressions of diasporic historical consciousness as grounds for contemporary autonomous rights.

This chapter focuses on young men's cultural practices and their armed resistance to the speculation of community lands by outside venture capitalists in the early 2000s. Many of the men involved in these acts of direct resistance are known as "bad boys," a countercultural identity that the men embrace and reproduce in their oppositional politics, personal style, and diasporic investments in popular culture. For these men, Monkey Point is an autonomous rural space where they can go to recover from drug abuse and escape the degradation of being poor and heavily policed in Bluefields. They are perhaps unlikely protagonists in the making of a social movement, but their direct resistance to land speculation signaled a deepening radicalism in community politics and an emergent political strategy for dealing with some of the worst abuses of the postwar state.

3 Life on the Edge of the Global Economy
chapter abstract

This chapter examines women's sociality as an autonomous sphere of self-valorization that is resistant to capitalist and patriarchal social relations and values. For women, livelihood politics are enmeshed in dense networks of gendered sociality and intimacy, where reciprocity and shared affective labor between women are central to survival under conditions of capitalist intensification. Women's sociality makes it possible to live independently of men and undermines a racial and gender division of labor that promotes wageless Creole women's subordination to male wage earners. The chapter argues that women's sociality is not a mere adaption to oppressive systems because it produces pleasure, self-respect, and solidarity and thus has autonomous social logics. As an affirmative practice rooted in working class Creole culture, it drives women's activism and their demands for collective rights.

This chapter tracks shifting security paradigms by drawing on narratives from community men who fought as contra during the 1980s and are now the targets of counternarcotics policing. Their accounts give intimate insight into how drug war violence and policing are historical outgrowths of cold war conflict and US intervention in Central America. Wartime stories show that coercion and physical violence were unavoidable for most Monkey Point men, as their age, gender, race, and class overdetermined their roles as Sandinista soldiers, contra fighters, draft evaders, deserters, and refugees. But rather than bringing peace and security, refuge in Costa Rica and repatriation to Nicaragua in the late 1980s and early 1990s signaled the demise of one securitized masculine subject (enemy combatant) and the rise of another (drug trafficker), producing new forms of securitized social control.

This chapter shows how ordinary life in Monkey Point was saturated and interrupted by military occupation and state sexual violence in the late 2000s. Drawing on racialized and sexualized fantasy, the occupation targeted local women and girls as objects of sexual domination, cast local men as masculine subordinates and racialized security threats, and promoted heteropatriarchal forms of mestizo territorial sovereignty. The soldier's abuse of girls initially followed preexisting patterns of gendered and sexual violence in the community before erupting into exceptional violence that provoked a public politics of opposition to the state. Diverse advocates for the girls struggled to fully decipher and politicize the racial, gendered, and sexual articulation of violence under military occupation, and state institutional power promoted impunity for mestizo state actors.

The epilogue reflects on the impact of more than a decade of community mobilization. It assesses the political opportunities and potential entrapments that recognition offers as community people continue to confront violence and systemic inequality in their territory. It further points to a reservoir of political knowledge and agency embedded in vernacular practice, gendered subjectivity, and black diasporic identification that challenges oppressive systems and suggests that territorial recognition can serve as a strategic asset that emboldens and radicalizes black autonomy and as a governance strategy that may facilitate the expansion of state and capitalist power. The tension between these two outcomes is likely to shape the contours of future struggle in the region.