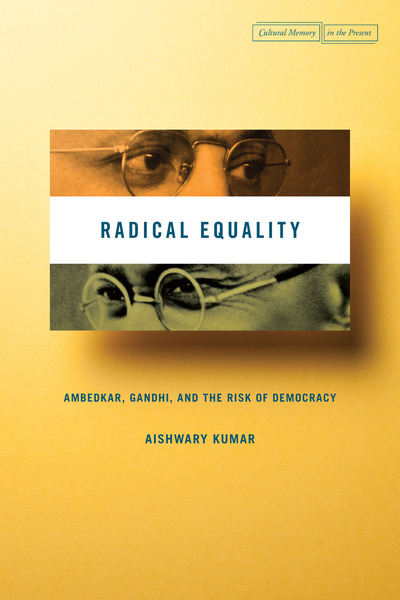 Contents
Excerpt from Chapter 1
Contents and Abstracts
1 Of Faith in Equality: Toward a Global Measure
chapter abstract

What sort of relationships did anticolonial mobilizations for national sovereignty forge between faith and politics, sacrifice and democracy, philosophy and resistance? This chapter traces a crucial moment in this genealogy to 1914-15, when Gandhi returned to India after spending two decades in South Africa, and Ambedkar arrived in New York as a student at Colombia University. Over the next three decades, the two created an unparalleled body of work engaged with questions of belief, action, and truth, replacing the nationalist aspiration for sovereignty with a resolute commitment to what this book calls unconditional equality. Reconstructing their inseparable and irreconcilable convictions, reclaiming the richness of Ambedkar's formulation "faith in equality" as an interpretive, performative, and methodological coup de force, this chapter charts out an alternative history of ethical responsibility and political realism in the modern nonwest. At stake, it argues, is the tension between the political and "the social question" itself.

2 Spirits of Satyagraha: A History of Force
chapter abstract

Gandhi was a master of neologisms, many of which, he insisted, were best left untranslated. Satyagraha, coined in 1907, was one of the earliest, through which Gandhi ingeniously supplanted the pacifism invoked by "passive resistance" and introduced the notion of force (bal) and resistance or firmness (agraha) in India's struggle against the empire. Despite the growing popularity of the term "civil disobedience," Gandhi continued to favor the more forceful term "civil resistance." "Civil resistance is a complete substitute for violence," he declared in 1934. "Through it everyone has to achieve his own swaraj. This weapon has given spirit and new strength to the masses." This spirit, its place in Gandhi's ontology of force, a force whose laws, he insisted, were at once natural and proper to the human alone, is the focus of this chapter. At its center is Gandhi's relationship to the spirit of the law as such.

3 Laws of Force: Ambedkar and the Mystical Foundation of Authority
chapter abstract

Returning to Ambedkar's Atlantic commencements, retracing the relationship between force and justice that he begins to forge in the 1910s, this chapter offers a new history of the beginnings of Ambedkar's revolutionary philosophy. It was in New York that Ambedkar begins to struggle with the problem of force, its mysticism and secrecy, its potentiality and weakness. But the struggle acquires radical form from the 1920s onward, first at the Mahad Satyagraha in 1927 (where a copy of the Manusmriti is publicly burned in the name of a new equality) and then in Annihilation of Caste in 1936 (where a critique of Plato's Republic is mounted for the first time). Was Ambedkar's immense, almost mystical commitment to Indic texts on sovereignty and sacrifice, such as the Gita, ever dissociable from his ethics of destruction? Is resistance against religion, Ambedkar asks, not the heart of every religious responsibility worthy of the name?

In 1931, Gandhi introduces the name harijan ("children of God") for the 50 million "untouchables" of India. The gesture radicalizes his phenomenology of spirit irreversibly. For it reveals, in the most dogmatic form, Gandhi's commitment to "equality of the spiritwithout which no other equality is possible." This chapter recovers the morals and consequences of that decision. The harijan, it argues, was neither simply another name nor a "sacred force". Instead, it was a condensation of Gandhi's ontological and phenomenological partitions, one in which his incalculable desire to touch the untouchable was rendered indissociable from his ethics of disciplinary limit and measure. Limit at the heart of religion, touching within the calculus of reason alone: this is what Gandhi calls maryada dharma. And this limit, in its punitive integrity, structures his indifference toward the fearless revolutionaries of his time no less decisively than it does his apotheosis of the atishudra.

5 The Freedom of Others: Annihilation of Caste and Republican Virtue
chapter abstract

Like swords crossed against each other, Ambedkar's two major interwar works, Annihilation of Caste (1936) and Thoughts on Pakistan (1941) seem locked in perilous balance. One committed to the unconditionality of equality, the other consumed by the rhetoric of republican security. Yet, they share a set of methodological commitments that would come to enduringly guide Ambedkar's struggle to imagine a freedom without mastery. Beginning with the writings of the 1930s, this chapter follows the modalities of those commitments up until Ambedkar's interventions in the Constituent Assembly debates of the late 1940s. What kind of republic did Ambedkar really envision? A republic of resistance and fearlessness, a city of virtue and truth, it posits. It is this ethics of insurrectionary courage (inscribed at the heart of citizenship), this resistance against the over-constitutionalization of the political, this making reciprocal of the right to freedom that this chapter reconstructs.

"Thank Godhe is singularly alone," thus appears Gandhi's relief at Ambedkar's purportedly faithless denunciation of scripture in Annihilation of Caste. This chapter probes the depths of that Gandhian respite. It tracks how Gandhi's conception of truth, transformed by the pressures of mass politics, mediates the convictions of Gandhi, the reader. Did Ambedkar's use of "annihilation" or ucched, a word that prophesized a new religion of responsibility, a word that gestured toward the inalienable and immeasurable freedom of force (which Ambedkar insisted the believer and heretic must equally possess), lead Gandhi to discern in it a nihilistic urge? Recovering the phenomenology of sacrifice and rigor that sustained Gandhi's relationship to the law (and reading), the chapter delineates the relationship between his ethical religion (dharma) and Ambedkar's struggle for a religion without religion (dhamma). At stake, it proposes, was the abyss between Ambedkar's religion of resistance and Gandhi's belief in measure.

Did Ambedkar's democracy have a place for belief? Could his "love of truth" coexist with his "love of politics"? Focusing on his final works (beginning with his opposition to capital punishment), this chapter realigns Ambedkar's constitutionalism along his meditations on the ethical, mapping a topography of his political philosophy that was at once deeply marked by the religious and profoundly aware of its risk. A scrupulous theorist of sovereignty, Ambedkar emerges here as a critic of mastery and sacrifice, who seeks to open a new horizon of justice; a responsibility or maitri that might transcend the anthropological distinctions between man and woman, major and minor, citizen and noncitizen, human and nonhuman. It was Ambedkar's sensitivity to the incommensurable (and yet equally shared) vulnerability of citizens that had perhaps forced Gandhi to sigh at his singular aloneness. Sunnyata was this vulnerability turned radical, the void where force and justice became inseparable.

As Ambedkar today emerges as the newest site of modern India's interminable struggle with history, and the Hindu Right—whose politics he once called "gangsterism"— becomes the latest ideological formation to enter the war to appropriate his legacy, it becomes clearer than ever what Ambedkar had meant by the void (of politics): an emptiness, a lawlessness, a lie at the very heart of nation-states. But this void was not to be renounced. For the void was also spirit, the invisible crypt of an insurrectionary citizenship, an instance and institution of force at its most egalitarian. Only when the encounter between Ambedkar and Gandhi is placed within a global constellation of secular and theological traditions, the epilogue argues, that it illuminates why the emancipatory possibilities offered by the insertion of faith into democracy must honestly contend with the transformative risk that the politicization of religion brings in its wake.