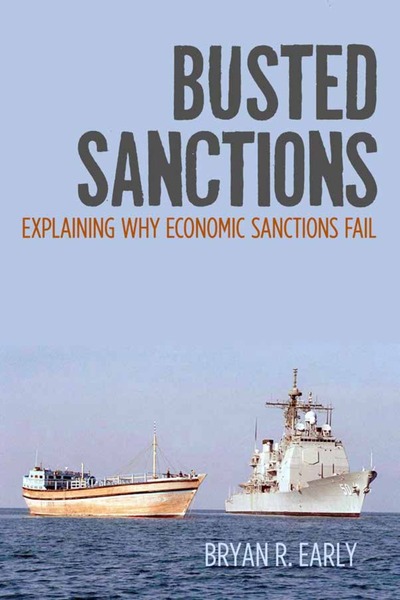 This chapter offers an overview of why U.S. policy makers employ economic sanctions, the wide range of adverse effects that sanctions have, and the poor track record of success that sanctions have had. It explains how economic sanctions affect their targets and incentivize different types of responses from third-party states that vary from cooperating with them to actively undermining them. The chapter then summarizes the theory of sanctions busting, explaining why extensive sanctions busters emerge and how their sanctions-busting aid and trade impact the effectiveness of sanctioning efforts. The chapter then discusses the mixed-method research design that will be used to evaluate the theory of sanctions busting and describes the book's findings in brief.

2 What Are Sanctions Busters?
chapter abstract

This chapter explains how economic sanctions incentivize their targets to try to forge extensive commercial ties with small numbers of third-party states and to seek out the patronage of benefactors willing to provide them with extensive aid packages. It describes the role that sanctions busters can play in undermining sanctioning efforts via their aid and trade and explains why past approaches have been unable to systematically account for these effects. The chapter draws on the South African and North Korean sanctions episodes to illustrate the motives that appear to drive aid-based versus traded-based sanctions busting and presents distinct profiles for the types of states most likely to become aid-based sanctions busters and trade-based sanctions busters.

4 For Profits or Politics? Why Third Parties Sanctions-Bust via Trade and Aid
chapter abstract

This chapter examines how and why trade-based sanctions-busting relationships are fostered. It evaluates the trade-based sanctions-busting relationship that formed between the United Arab Emirates (UAE) and Iran after the United States sanctioned Iran in 1979. The chapter examines the formation and evolution of the sanctions-busting relationship during the period that preceded the military alliance the UAE formed with the United States (1979–1994) and period that followed the creation of their alliance (1995–2005). The analysis reveals insights into how the emirate of Dubai emerged as the leading venue for conducting sanctions-busting trade with Iran. The chapter also illustrates how even American firms used Dubai to circumvent the U.S. government's sanctions. Its postscript analyzes how recent changes in U.S. sanctions policies (2006–2013) have finally begun to succeed in curbing the sanctions busting taking place on Iran's behalf in the UAE and other countries.

This chapter offers a summary analysis of the overarching findings of the book and explores their implications for policy makers and the broader study of economic statecraft. It summarizes the overarching threat that sanctions busting poses to the effectiveness of sanctioning efforts and offers a number of recommendations about how policy makers can best respond to them. It is argued that while sanctions busters will continue to represent an endemic challenge to sanctioning efforts, they pose problems that can be anticipated and, in some cases, mitigated if properly understood. The chapter concludes by examining how future research can build on the insights garnered from the book.