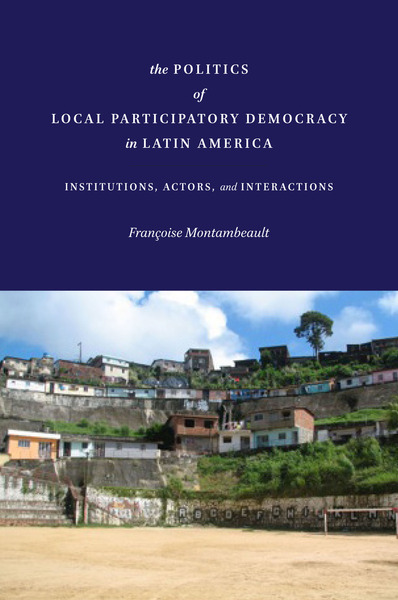 The Introduction sets up the theoretical and empirical puzzles of the book. In Mexico and Brazil, participatory democracy reforms have been implemented as part of an emerging democratizing discourse among political parties to which citizen participation was central. In practice, however, these reforms have had mixed results, between countries and also between municipalities within a single country, as in the case of Mexico and Brazil. How do we explain success? And more important, how do we define success? The Introduction poses the debate around these two questions, presenting the theoretical arguments developed and the novel comparative method used to empirically demonstrate these arguments.

Chapter 2 makes the case for a redefinition of the democratic success of local participatory democracy, determined by the nature of the state-society relationships that develop through formal and informal participatory interactions. The chapter presents a typology to account for variation along the two defining dimensions of state-society relationships: the nature of mobilization (from individual to collective forms) and the level of autonomy of the participants (from controlled to autonomous). It defines the four ideal types used throughout the book to categorize the diversity of empirical outcomes observed across cases: clientelism, disempowering cooption, fragmented inclusion, and democratic cooperation.

3 Why Do Cases Vary? A Comparative Approach
chapter abstract

Chapter 3 presents the four cities selected in greater detail, exploring existing explanations for variations in success by emphasizing the cases' historical and institutional similarities. It offers a framework for explaining the various state-society relationship outcomes; defining the indicators for a series of cultural, institutional, and agency-related factors that, combined and in interaction with one another, can explain variation along both the mobilization and the autonomy dimensions of state-society relationships across and within cases.

Chapter 4 shows that the case of participatory planning in Nezahualcóyotl closely corresponds to the ideal type of clientelism. The persistence of this traditional type of state-society relationship in the city despite the existence of formal participatory channels is explained by two factors. First, a tendency of institutional design to encourage individual and particularistic forms of mobilization is observed. Second, the local sociopolitical context—characterized by high political competition among and within parties and an imbalance of civil society organizations engaged in the process that maintain unequal understanding of state and society actors' roles in the process—contributes to maintenance of control strategies in participatory mechanisms that, in turn, undermine the autonomy of civil society participants.

Chapter 5 shows that the case of participatory planning in León corresponds to the ideal type of fragmented inclusion. The development of such a relationship is explained by two main elements. First, the case points to a tendency of the chosen institutional design to encourage individual forms of mobilization, organized around particularistic demands. Second, the sociopolitical context characterized by a relatively stable situation of political competition among and within parties and by participation of all sectors of civil society tends to encourage development of a partnership understanding of the state's and society's roles in the participatory process and to minimize the use of control strategies and open up possibilities for increased autonomy among participants.

Chapter 6 moves the analysis to the case of Recife, in Brazil. This city presents two cases in one, and as such allows a unique time-based comparison that adds to the space-based comparisons undertaken throughout the book. The chapter shows that Recife's two distinct experiences of participatory budgeting, implemented under different local governments, reveal contrasting patterns of state-society relationships: the first one (1993–2000 under a PMDB/PFL coalition) closely corresponds to an ideal type of clientelism, while the other one (2001–2009, under the PT) has the characteristics of disempowering co-option. These varying outcomes thus represent a variation on the mobilization axis, which is best explained by the important changes introduced in the institutional design by the PT in 2001. The sociopolitical context, however, sustained an unequal partnership and political control practices in both experiences.

Chapter 7 presents the most successful case, Belo Horizonte, showing how it more closely corresponds to a case of democratic success, with democratic cooperation emerging between state and society actors. This is best explained by two main elements. On the one hand, the institutional design adopted in Belo Horizonte fostered collective organization of groups of citizens to define the common good. On the other hand, the sociopolitical context within which the process was implemented fostered the autonomy of participants and, rather than sustain strategies of political control, led to development of an equal partnership (understood as such) between state and society actors in the participatory process.

Chapter 8 places the conclusions in a comparative perspective, highlighting the theoretical and policy lessons that can be learned from the five empirical cases presented in the book. It then explores the differentiated consequences each type has for the deepening of local democratic practices in governance processes, highlighting the limits and potential of each model as well as discussing the implications for the quality of democracy and its procedures, processes, and policy outcomes. The chapter discusses the theoretical implications of the findings for the study of institutional reform, civic engagement, and democratization, and also the policy implications for the policy makers and politicians who lead such types of participatory democracy reforms throughout Latin America, as well as in municipalities around the world.