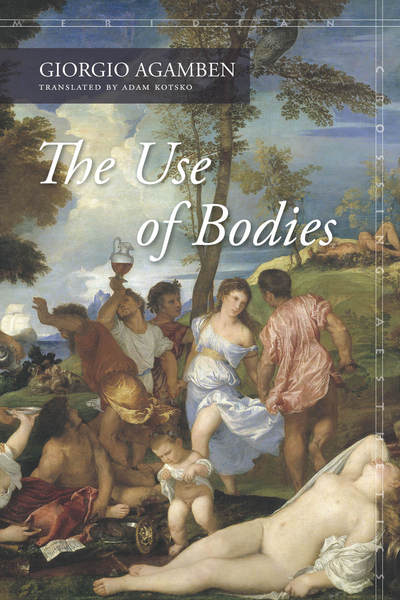 The Use of Bodies
Giorgio Agamben Translated by Adam Kotsko

Those who have read and understood the preceding parts of this work know that they should not expect a new beginning, much less a conclusion. In fact, we must decisively call into question the commonplace according to which is it a good rule that an inquiry commence with a pars destruens and conclude with a pars construens and, moreover, that the two parts be substantially and formally distinct. In a philosophical inquiry, not only can the pars destruens not be separated from the pars construens, but the latter coincides, at every point and without remainder, with the former. A theory that, to the extent possible, has cleared the field of all errors has, with that, exhausted its raison d’être and cannot presume to subsist as separate from practice. The archè that archeology brings to light is not homogeneous to the presuppositions that it has neutralized; it is given entirely and only in their collapse. Its work is their inoperativity.

The reader will thus find here reflections on some concepts—use, demand, mode, form-of-life, inoperativity, destituent potential—that have from the very beginning oriented an investigation that, like every work of poetry and of thought, cannot be concluded but only abandoned (and perhaps continued by others).

Some of the texts published here were written at the beginning of the investigation, which is to say, almost twenty years ago; others—the greater part—were written in the course of the last five years. The reader will understand that, in a writing process so prolonged in time, it is difficult to avoid repetitions and, at times, discordances.