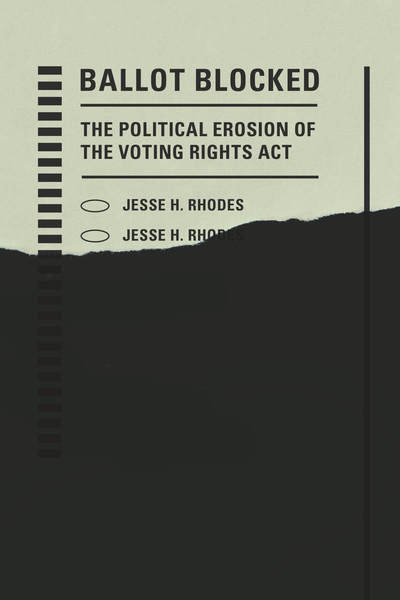 Explaining the Puzzling Evolution of the Voting Rights Act

On June 25, 2013, the Supreme Court announced its decision in Shelby County v. Holder. The landmark ruling overturned a central provision of the Voting Rights Act (VRA), known as the “coverage formula,” that identified jurisdictions with records of racial discrimination in elections and thereby made their proposed election rules subject to preapproval by the federal government. By striking down the coverage formula, the Court made it much easier for these jurisdictions to instate stringent election rules that raise significant obstacles to voting, particularly among younger, poorer, and nonwhite citizens.

While Democrats sharply criticized the ruling as an assault on the right to vote, prominent Republican politicians cheered the decision for recognizing putative improvements in race relations and returning political authority to the states. Senator Charles Grassley of Iowa declared, “What [the ruling] tells me is after 45 years, the Voting Rights Act worked, and that’s the best I can say. It just proves that it worked.” Jeff Sessions, a Republican senator from Alabama, endorsed the decision in an almost identical fashion, asserting that “the world has changed since 1965. . . . It was raw discrimination in 1965. . . . That’s why the act passed, and it has been pretty darn successful.”1 Republican senator Lindsey Graham lauded the ostensible benefits of the ruling for American federalism: “As a South Carolinian, I’m glad we will no longer be singled out and treated differently than our sister states.”2

At first blush, the celebration of the Court’s decision by Grassley, Sessions, and Graham—all conservative Republicans—seems unsurprising. After all, the conventional wisdom is that today’s Democrats support vigorous enforcement of minority civil and voting rights by the federal government, whereas contemporary Republicans prefer granting deference on these matters to state and local governments and the private sector. But there is just one small problem with this simple narrative. All three Republican senators—along with virtually all of their colleagues in the GOP—voted in 2006 to reauthorize for a twenty-five-year period the provision struck down by the Court. In lauding the Shelby County ruling, Grassley, Sessions, and Graham were celebrating the judicial demolition of a policy they had recently voted to entrench in law.

Why would they do such a thing? Ironically enough, insight into this puzzling behavior can be found in the remarks of late conservative justice Antonin Scalia, a strident critic of federal voting rights enforcement. During oral arguments in Shelby County, Scalia claimed that consistent bipartisan support in Congress for the Act—which had been reauthorized repeatedly between 1970 and 2006—was attributable to the tendency of conservative legislators to vote for the legislation in spite of their better judgment, out of the cynical desire to better position themselves for electoral success. As Scalia explained,

I don’t think there is anything to be gained by any Senator to vote against continuation of this act. . . . Even the Virginia Senators, they have no interest in voting against this. . . . They are going to lose—they are going to lose votes if they do not reenact the Voting Rights Act. Even the name of it is wonderful: The Voting Rights Act. Who is going to vote against that in the future?3

In Scalia’s mind, the failure of conservative members of Congress to oppose continuation of the coverage formula justified judicial intervention to prevent the indefinite extension of the constitutional wrong of subjecting states to federal oversight of their election systems. “I am fairly confident [the coverage formula] will be reenacted in perpetuity unless—unless a court can say it does not comport with the Constitution,” the conservative justice declared. “It’s—it’s a concern that this is not the kind of a question you can leave to Congress” (emphasis added).4

Scalia’s normative argument that the Supreme Court was obligated to rid the nation of what he characterized as an unconstitutional “racial entitlement” was both misleading and self-serving. But his interpretation of the motivations and behaviors of Republican elected officials (and their allies on the Supreme Court) contained an important kernel of truth. Scalia’s remarks unintentionally illuminated the political logic that encouraged conservative members of Congress to acquiesce to the repeated expansion of the VRA and then to cheer when their conservative judicial allies weakened the very legislation they ostensibly endorsed.

As I show in this book, conservative elected officials who opposed the expansion of federal voting rights enforcement—but were unwilling to do so openly for fear of alienating both people of color and moderate white voters and thereby harming their party’s electoral prospects—adopted a sophisticated long-term strategy to weaken the Act while maintaining a positive public reputation on voting rights matters. In high-profile legislative debates, many Republicans (and conservative southern Democrats) acceded to expansive reauthorizations of the Act, despite their opposition to much of its content, in order to burnish their civil rights credentials. At the same time, however, they adopted lower-profile strategies to limit the scope of voting rights enforcement.

Republican presidents, with the support of many congressional Republicans, empowered conservative justices on the Supreme Court to weaken the Act on their behalf. They also crafted esoteric administrative rules and exploited obscure bureaucratic procedures to limit implementation without running the risk of adverse public scrutiny.

Over time, this strategy enabled critics of the VRA in the elective branches of government to weaken federal voting rights enforcement while obscuring their culpability for doing so. More broadly, this approach advanced the long-term Republican project of eroding the authority of Congress, the most representative branch of the federal government, to protect vulnerable Americans under the Fourteenth and Fifteenth Amendments to the Constitution. Far from strengthening the democratic process, as Justice Scalia suggested, the developments described in this book eroded the promise of American democracy by rendering the voting rights of people of color and minority-language speakers more vulnerable and hobbling the capacity of Congress to preserve their rights.

This book provides a compelling answer to two questions that have puzzled observers of federal voting rights politics: Why did key conservative Republican officials consistently adopt administrative and judicial decisions that undermined the very legislation they previously endorsed? And why have the legislative text, administrative implementation, and judicial interpretation of the VRA so frequently worked at cross-purposes? As I show, these counterintuitive developments derive from persistent efforts by key Republican elected officials to limit federal voting rights enforcement while simultaneously maintaining the electorally useful appearance of fealty to the ideal of racial equality. Only by promoting (low-profile) judicial and administrative decisions that controverted their (high-profile) legislative choices could conservative Republican officials advance both of these contradictory goals. The repeated execution of these discordant maneuvers determined the fractious character of federal voting rights enforcement.

This book offers broader payoffs for our understanding of how partisan coalitions manipulate the characteristics of different governing institutions to achieve controversial objectives without eroding their political support. It is now widely understood that partisan coalitions attempt to shape the personnel and behavior of the executive and judicial branches so that these advance elected officials’ policy goals.5 More subtly, scholars have recognized that partisan coalitions ascending to power in the elective branches of government sometimes pass along to allies on the Supreme Court or within the federal bureaucracy responsibility for deciding controversial matters that they feel constrained from resolving themselves due to fear of backlash from constituents.6 Researchers have even posited that, in extreme circumstances in which elected officials grudgingly acquiesced to legislation they deplored in order to placate some constituents, they may invite unelected allies to overrule their own choices so as to surreptitiously accomplish their preferred goals.7 Yet the empirical evidence for these stronger claims—especially the fairly radical proposition that partisan coalitions sometimes encourage administrative and judicial allies to overturn choices made under duress—remains limited due to the methodological and evidentiary challenges of documenting this behavior.8 Drawing on thousands of archival and primary sources, dozens of oral histories, hundreds of contemporary newspaper articles, and numerous scholarly works, this book demonstrates through a detailed analysis of the evolution of the nation’s most effective civil rights law that elected officials may deliberately and repeatedly invite (indeed, empower!) unelected allies to weaken or overturn legislation they abhorred but were unwilling to block.

The case of voting rights politics offers further insights on the use of administrative and judicial institutions by partisan coalitions to advance cherished but controversial programmatic objectives. The canonical works in this literature have focused on the efforts of “lawmaking majorities” or “dominant national coalitions” to achieve controversial ends by nonlegislative (and especially judicial) means.9 In these studies, dominant coalitions take full advantage of their ascendancy, authoritatively entrenching their preferred outcomes in administration and jurisprudence. What is notable about federal voting rights politics, however, is that conservative political actors, primarily but not exclusively within the Republican Party, sought with considerable success to advance their preferred policies by administrative and judicial means despite lacking a durable “lawmaking majority” or “dominant national coalition” during the 1965–2015 period.10 As this book shows, conservative leaders in the Republican Party exploited periods of control of one or more branches of the federal government to incrementally advance the project of limiting federal voting rights enforcement via the executive branch or the judiciary. Each step in this process provided a firmer institutional foundation on which similarly minded Republican officials could build, if and when they reclaimed political power. Yet, because critics of federal voting rights enforcement were simultaneously acquiescing to legislative expansions of the VRA in order to maintain a positive reputation on voting rights matters, their entrenchment efforts were always fragmented and incomplete. These observations point to a distinctive, incremental pattern of institutional manipulation by partisan actors to effectuate preferred objectives by subterranean means.

My study also adds nuance to our understanding of the role national governing institutions play in extending or retarding the realization of civil rights for vulnerable groups in society. Scholars have long debated whether the elective branches of government or the federal courts offer greater opportunities for the advancement of civil rights.11 In my view, however, this question is somewhat misplaced. Rather than thinking about the various branches of the federal government as possessing relatively stable characteristics that make them more or less effective in promoting civil rights in general, we should instead imagine them as fairly fluid institutions whose influence on civil rights policy making can vary dramatically depending on who is occupying them and for what purposes.12 This perspective brings partisan coalitions to the forefront, focusing on the ways in which these coalitions manipulate the frequently ambiguous characteristics of institutions to advance diverse—and even conflicting—programmatic objectives.13

4. Transcript of Oral Arguments, US Supreme Court, Shelby County, at 48.

9. For example, Robert A. Dahl, “Decision-Making in a Democracy: The Supreme Court as a National Policy-Maker,” Journal of Public Policy 6, no. 1 (1957): 279–95; and Graber, “Nonmajoritarian Difficulty.” These ends may be controversial within the dominant coalition, between the national parties, or at the state and local levels.

10. I thank an anonymous reviewer for this important point.

11. See, for example, the vigorous debate on the question of whether the federal courts can have a significant impact on civil rights struggles by themselves or are ultimately dependent on the president and Congress (and the activism of minority advocates) to advance civil rights agendas. See Gerald Rosenberg, The Hollow Hope: Can the Courts Bring about Social Change? (Chicago: University of Chicago Press, 1991); David J. Garrow, “Hopelessly Hollow History: Revisionist Devaluing of Brown v. Board of Education,” Virginia Law Review 80, no. 1 (1994): 151–60; and Michael J. Klarman, “How Brown Changed Race Relations: The Backlash Thesis,” Journal of American History 81, no. 1 (1994): 81–118.