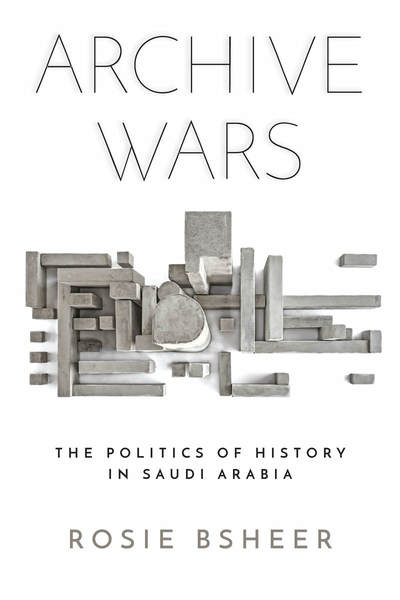 In the aftermath of the 1991 Gulf War, ruling elites in Saudi Arabia adopted measures that aimed to reconfigure state power by pacifying wartime popular opposition, reshaping the politics of subject formation, and diversifying the petroleum economy. The ensuing struggle over state form—what I call archive wars—revolved around the production of history, the reordering of space, and the repurposing of valuable real estate. Historicizing these practices helps us rethink the nature of modern archival formation as well as statecraft while calling into question scholarly assumptions about the cohesiveness of authoritarian states, and of states in general. Approaching the domains of history making and urban planning as mutually constitutive, contested, and ongoing material practices of state formation complicates conventional understandings of the nature of state power and its imbrication with archive formation.

This chapter takes up one strand of sociopolitical and cultural life in late Ottoman Mecca: the school of Indian religious scholar Muhammad Rahmatullah al-Kairanawi and its relation to the emergence of an intellectually engaged Hijazi middle class during the nahda. The chapter then attends to how the Saudi state occluded and repackaged this history since 1932. Beyond the symbolic power it bestowed upon its rulers, Mecca was a space where intellectual debate flourished, honing the minds of thinkers who became central figures in twentieth-century politics and religion. Yet Mecca's past is absent from histories of the Hijaz and of Saudi Arabia and from histories of intellectual thought, cultural production, and political activism in the late Ottoman period. Unearthing these transregional histories is urgent because the Saudi state has been destroying the city's built environment in lockstep with the logic of historical erasure and state formation.

2 A State With No Archive
chapter abstract

In 1966, at the height of the struggle between reactionary and progressive forces that pitted Al Saud against Gamal Abdel Nasser and progressive forces inside Saudi Arabia, King Faisal passed the country's first archiving law. The aim was to choreograph a sanitized version of history and to reify elites' political, territorial, economic, and cultural claims. This chapter connects the beginning of archival praxis in Cold War Arabia to the necessity of managing elite power rivalries and fending off threats from regional rivals and domestic political movements. These anxieties shaped archival praxis and subsequently institutionalized a culture of secrecy and rivalry across the bureaucracy, with the push and pull of the archival operation mirroring the rivalries endemic to the Saudi state. Tracing the battles to produce an archive from the mid-1960s until the late 1980s shows how Saudi Arabia complicates conventional thinking about archives and about the authoritarian state itself.

In the 1990s, Saudi Arabia's top rulers sought to shift the grounds for political legitimation, subject formation, and economic diversification to maintain power following the Gulf War. This required the production of primary source materials for a revised, secular official history, the repositories that would house them, and the spaces that would monumentalize such a discourse. The Darah, along with the Ariyyadh Development Authority, assembled the past and its spaces in Riyadh. With the backing of Salman, who was Riyadh's governor at the time, the low-grade archive fever of the 1970s got a second lease on life. Like Faisal before him, Salman faced challenges to centralizing the archive: from members of the ruling family, politicians and bureaucrats, activists and archivists. Institutional acts of history making and placing put into question the coherence of historical narration and memorialization, and expose archival anxieties and rivalries among the architects of state building.

In the aftermath of the Gulf War, an army of urban planners, economists, historians, archeologists, and tourism consultants descended upon Riyadh. Under the aegis of the High Commission for the Development of Arriyadh, they brainstormed ideas for the redevelopment of the capital city, with an eye to the economic, political, and social challenges that the country was facing in the late twentieth century. The Arriyadh Development Authority oversaw the production of a regulatory planning document that would transform Riyadh into the administrative, cultural, economic, touristic, and historical center of Saudi Arabia. This chapter examines the production and destruction of historical sites since the 1950s. It shows how the 1990s saw the acceleration of the remaking of historical areas in Riyadh and the creation of a productive heritage industry therein. Memorialization came to constitute a key node in the postwar architectural reformulation of the state.

5 Bulldozing the Past
chapter abstract

Since the early 2000s, the Saudi state summarily dynamited whole mountains around the Grand Mosque, destroying much of Islam's material history and replacing it with commercial megaprojects. The deliberate demolition of historical and religious sites in Mecca starkly contrasts with the preservation of more recent and dilapidated sites associated with Al Saud's heritage in Riyadh. In post–Gulf War Saudi Arabia, Mecca came to serve a different legitimating purpose, one rooted in grandiose infrastructural projects and aesthetics, wherein secular time overwhelmed religious temporality and subjectivity. The regime used Wahhabi iconoclasm and the need to modernize the hajj to justify such destruction. This chapter shows how the city's urban "renewal" was inextricable from archival formation and urban planning in Riyadh. The neoliberal city was at the heart of the twinned postwar process of real estate and heritage development, with Al Saud and the Binladin family reaping billions off its redevelopment.

This chapter centers on how Saudi rulers instrumentalized religion to pacify post–Gulf War popular contestation and shifted the basis of state legitimation to secular historical memorialization, political commemoration, and urban redevelopment. Using these material practices, it shows how statecraft, even in authoritarian regimes, evolves diachronically in response to a multiplicity of challenges, not least of which is popular opposition. The postwar project, however, was transformed at different critical junctures: the terrorist attacks in Saudi Arabia in the 2000s, the Arab Uprisings, and the ascension of the postwar project's architect, Salman ibn Abdulaziz, to the throne in 2015. With Salman in power, the archival landscape, both institutional and spatial, has for the most part succumbed to his decades-long national vision. Cultural and urban redevelopment reflects the material culture and built environment of Salman's Saudi Arabia, which enshrined his view of the past, present, and future.