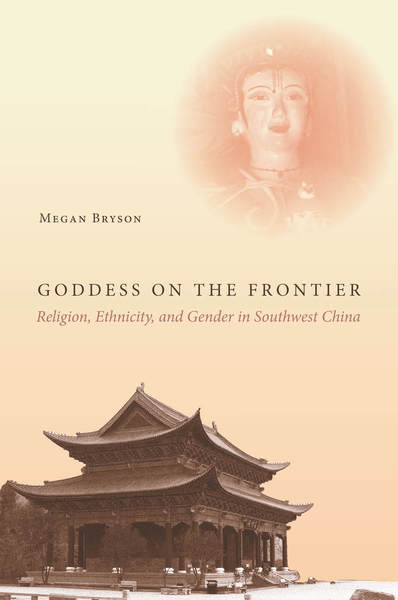 Goddess on the Frontier
Religion, Ethnicity, and Gender in Southwest China
Megan Bryson

The introduction gives an overview of the goddess Baijie's four identities and the book's main themes of religion, ethnicity, and gender. It starts by examining the relationship between deities and society, with a focus on gendered deities, local deities, and deities of the Chinese frontier. It also introduces the Dali region, which it locates both in Zomia, the mountainous, stateless region that covers much of Southeast Asia and southwest China, and in relation to the Chinese state. Baijie's different forms illustrate how people in Dali managed the tensions between their local identities and the increasing proximity of the Chinese state. Finally, the introduction addresses historiographical and methodological issues that arise in studying Dali and concludes with an outline of each chapter.

1 Baijie's Background: Religion and Representation in the Nanzhao and Dali Kingdoms
chapter abstract

Chapter one goes back to the Nanzhao (649-903) and Dali kingdoms (937-1253) to understand the broader context in which the Buddhist Baijie arose. It shows that though Nanzhao and Dali rulers adopted most of their Buddhist texts from Chinese territory, they embraced Indian Buddhist images and claimed Indian origins for their Buddhist tradition. Moreover, it was their worship of distinctive deities with Indian iconography that distinguished their Buddhist tradition from that of Tang and Song China. This emphasis on India did not just stem from India's prestige as Buddhism's birthplace, but also from Dali's position in relation to China. While Nanzhao and Dali rulers could not claim equality with Chinese rulers as Sons of Heaven, their relative proximity to India meant that they could claim superiority as Buddhist monarchs.

The second chapter focuses on the Buddhist Baijie Shengfei, a hybrid figure whose identity combines elements of the Indian goddess Lakmī and local dragon maidens. This chapter demonstrates how her hybridity and gendered characteristics relate to Dali rulers' religious self-representation. It argues that though Baijie Shengfei appears in tantric Buddhist materials as the consort of the wrathful Indian Buddhist protector Mahākāla, she herself does not embody the sexuality or violence seen in images of many Indian and Tibetan tantric goddesses. Dali rulers embraced images of fierce tantric masculinity, as shown in Dali-kingdom depictions of Mahākāla, but this did not extend to female figures like Baijie. This stemmed from Dali rulers' close interactions with China, in which Dali could exploit stereotypes of martial masculine barbarism to their advantage, but not stereotypes of sexually uninhibited barbarian femininity.

This chapter examines Baijie's next form, Baijie Amei, which developed in the fifteenth century after the Dali kingdom had become part of the Ming dynasty. Baijie Amei's legend shows how Dali elites drew on Chinese historiographical conventions in formulating a local Bai ethnic identity. According to her legend, Baijie Amei was born from a giant plum and conceived Duan Siping, founder of the Dali kingdom, after touching a dragon. This story mirrors Chinese tales about great rulers that claim dragon paternity, but diverges from Chinese conventions by giving Baijie Amei her own miraculous birth. Chinese officials accepted that male rulers could have miraculous births, but not that their mothers could, too. Baijie Amei remained a powerful symbol for Bai elites in Dali who claimed direct descent from her and worshiped her as a goddess that linked them to the illustrious Bai lineage of Dali's independent history.

4 Lady of Cypress Chastity: Baijie Furen in the Ming and Qing
chapter abstract

As the Ming dynasty continued and gave way to the Qing, more migrants from the empire's eastern and central regions made their way to Yunnan. Baijie Furen, the third form of Baijie, emerged as a result of this increasing contact between Han outsiders and Dali locals. This chapter argues that Baijie Furen, portrayed in legend as an eighth-century widow martyr, supplanted the earlier forms of Baijie because of her multifaceted identity: for Dali elites, she signified the region's long history of Confucian virtues, which marked it as civilized; for Ming and Qing elites, her exceptional example proved that imperial civilizing projects could succeed. In both cases Baijie Furen served as a proxy for the Bai people because male elites correlated a population's civilization with women's sexual propriety.

Baijie's significance shifts again in the modern period with the adoption of the terms ethnicity and religion. In the reform era (1978-present) Baijie again represents difference from Chinese identity, but in this period the language of ethnicity demarcates Bai from Han. However, the use of this language differs within the Dali population: male Bai elites present Baijie as a symbol of Bai ethnic culture, while most people who worship Baijie as their village guardian use gendered terms instead of ethnic discourse. Male Bai elites claim a modern, rational identity similar to the image of the Han and displace tradition, religiosity, and ethnic difference onto rural populations and women. This chapter relies in part on ethnographic research that examines how people not involved in textual production represent Baijie, which offers a new perspective on how gender plays a role in demarcating Bai ethno-cultural identities.

Conclusion: Ethnicity and Gender in the Cult of the Goddess Baijie
chapter abstract

The conclusion returns to the book's central question of how people in the frontier zone of Dali develop gendered local identities out of multiple possibilities. Baijie's examples, from the Dali kingdom to the present, show that people Dali locals have combined local and translocal elements in different ways in response to historical changes. Representations of Dali identity strategically use gendered symbols that correlate to local and translocal forces, so that Baijie's roles as dragon maiden, mother, and martyr tie her to Dali while also making her legible within universalizing semiotic systems.