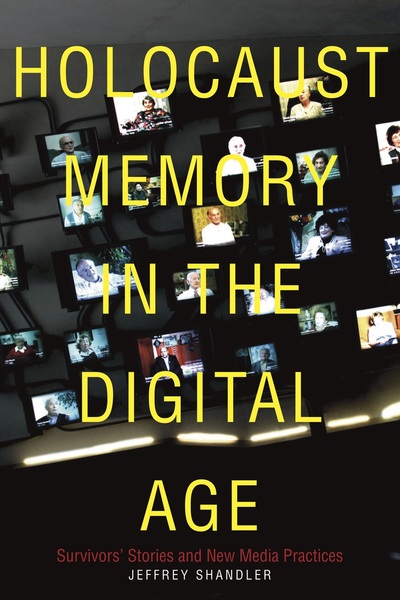 Videotaping interviews of Holocaust survivors began in the 1970s, at a strategic convergence of developments in technology (the widespread availability of videotaping and viewing equipment) and Holocaust remembrance, which had recently become a prominent fixture of public culture in the Western world. The Shoah Foundation's Visual History Archive (VHA), inaugurated in 1994, the largest and most available collection of these videos, straddles the temporal boundary marked by both the loss of living witnesses to the Holocaust and the transition from the "video age" to the "digital age." As such, the VHA is an exemplar for studying digital humanities as well as the dynamics of Holocaust remembrance.

1 An Archive in Contexts
chapter abstract

This chapter provides an overview of the creation and development of the Shoah Foundation's Visual History Archive (VHA) and situates the Archive in a set of contexts. First, the VHA is positioned within the history of Jewish ethnographic projects, dating from the late 19th century. Second, the Archive is situated within a burgeoning of public memory projects at the end of the 20th century, many of them focused on the Holocaust and World War II. Third, the VHA is located within the development of media used to document the Holocaust, from mid-20th century to the present, focusing on the Archive's position on the cusp of the transition from the "video age" to the "digital age."

This chapter challenges the prevalent notion that video interviews with Holocaust survivors provide accounts of exceptional immediacy, by examining how these interviews are informed by other narratives or survivors' own earlier storytelling, and how they incorporate into their life histories reflections on the task of recalling the past. The VHA includes dozens of survivors who discuss the 1994 feature film Schindler's List during their interviews. These references reveal how survivors implicate other narratives of this epochal event while relating their personal histories and offer impromptu reflections on the relationship between recalled experience and its mediation. Among several interviews in the VHA with renowned survivors is the video of Kitty Hart-Moxon, which is examined in relation to earlier accounts of her wartime experiences, revealing how living in the public eye and repeatedly telling her history of survival have become integral to her life narrative.

3 Language: In Other Words
chapter abstract

This chapter addresses the role of language in survivor interviews, focusing on the use of Yiddish. Survivors' engagement with Yiddish reveals the symbolic value they invest in speech when relating life histories. In dozens of bilingual interviews, survivors switch between Yiddish and another language, revealing the instrumental value of Yiddish as their first language and their self-consciousness about Yiddish as a signifier of both cultural intimacy and loss. Survivors' discussions of Yiddish in other languages evince linguistic disruptions in twentieth-century European Jewish life, emblematic of greater cultural and political upheavals. When performing a poem, song, or essay in Yiddish, survivors take control of the interviews, transforming them from dialogues to monologues and shifting to the survivors' preferred language and medium, such as poetry or music, for Holocaust remembrance. Through these performances, survivors offer creative acts in their erstwhile vernacular as a counterweight to recalling genocidal destruction.

To analyze the visual aspect of video interviews with Holocaust survivors, this chapter examines exceptional moments that disrupt the VHA's austere visual aesthetic of "talking heads." Hundreds of survivors reveal wartime injuries when interviewed, and thousands display prisoner numbers tattooed on their forearms. These moments shift visual attention away from the spectacle of speech, providing powerful reminders of the body as the site of genocide and its survival. The striking physicality of these displays also resonates with the longstanding use of images of injury to galvanize public attention to atrocities. Survivors' displays of wartime keepsakes offer a different kind of evidence from the life narrative, even as they rely on that narrative to articulate their significance. Displays of religious artifacts in these videos are especially revealing, conjoining the iconography of material evidence with religiously inspired moral exhortation.

Probing the Shoah Foundation's Visual History Archive (VHA) demonstrates the ongoing, complex interrelation of memory practices and media practices. The Foundation's commitment to preserving its recordings in perpetuity is in tension with the mutability of digital media and the potential that digitization provides for interviews to be continuously atomized and reconfigured by users. What the Foundation sustains is a dynamic maintenance—repeatedly updating the VHA's technology, working to establish an ever-widening array of users, finding new points of entry to engaging the recordings and creating new outcomes for their use. These ongoing innovations situate the Foundation's dedication to preserving memory within the subjective, contingent and relational nature of remembering.