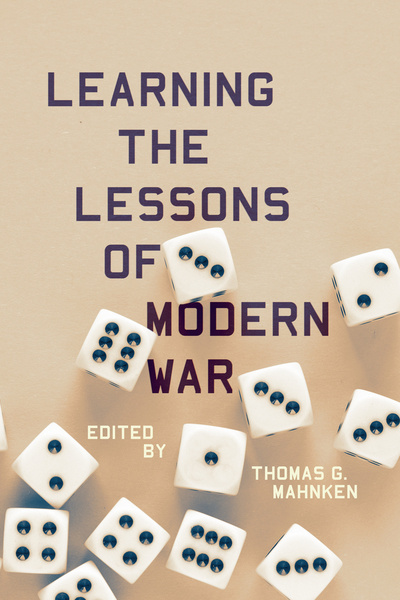 This book uses the study of the recent past to illuminate the future. More specifically, it examines the lessons of recent wars as a way of understanding continuity and change in the character and conduct of war.

Because the test of arms is the only true test of a military’s effectiveness, and because wars are both occasional and unique, knowledge of military affairs must combine theory and practice. Imagine a surgeon who studies his profession diligently by reading the most up-to-date medical journals, observing others in the operating room, and practicing using the latest training aids, but only enters the operating room a couple of times during his career, if at all. Imagine also that that surgeon learned from professors and interned under surgeons who had themselves studied and performed only a few procedures. And imagine that each surgical procedure is different, on a different patient, and under unique circumstances. That, metaphorically, is the military profession, and that metaphor highlights the critical importance of theory and history for the military profession. It is thus fitting that this book’s authors are a group of scholar-practitioners from across the globe.

The first section of the book discusses the importance and the challenges of learning lessons from military history.1 In the chapter that opens the section, Michael Evans makes a powerful case for a contemporary and interdisciplinary approach to history, one that is fully engaged with considerations of the profession of arms, to help soldiers and scholars navigate through the fog of peace to apprehend the future of warfare. In the chapter that follows, Williamson Murray examines attempts by military organizations to learn lessons from history over the past two centuries. His survey reveals a decidedly mixed record, a tangible reminder of the challenges that await those who seek to learn from history and of the importance of cultivating history-mindedness in the profession of arms.

The second section of the book explores the lessons of the wars in Iraq and Afghanistan, two protracted irregular wars that have shaped a generation of American, allied, and coalition soldiers individually and collectively.2 We are as human beings both informed and burdened by our personal experiences. If history is a guide, the lessons the military leaders of today and tomorrow have learned (or mis-learned, ignored, or forgotten) from these conflicts cannot help but shape decisions they will make for decades to come. In the section’s first two chapters, Peter Mansoor discusses the lessons of the Iraq War and Brigadier (Retired) Ben Barry offers a British perspective on the war. In the chapter that follows, Kevin Woods draws upon the treasure trove of Iraqi archival materials seized by coalition forces in 2003 to provide an Iraqi military perspective on the invasion of Iraq as a reminder of just how much an adversary’s perceptions can differ from our own. Woods’s chapter also provides a useful reminder that any account of a war that does not adequately give voice to the adversary’s perspective is incomplete and likely misleading.

This book’s chapters on Afghanistan, written in 2015, illustrate the challenges of learning from an ongoing war. Carter Malkasian discusses the challenges that coalition forces faced as they sought to formulate and implement a counterinsurgency strategy, whereas Theo Farrell provides an evaluation of Britain’s performance in the war through 2014. T. X. Hammes focuses on the importance of building the capacity of local forces for security in Afghanistan. More specifically, he focuses on the challenge of raising and mentoring Afghan security forces. Finally, Todd Greentree’s chapter provides an assessment of the overall U.S. government performance in Afghanistan.

The book’s final section examines the lessons of other recent wars from across the globe. Ahmed Hashim discusses the course and outcome of the Sri Lankan civil war, which featured an insurgency, and an approach to counterinsurgency, that differed greatly from the wars in Iraq and Afghanistan. Similarly, David Maxwell’s chapter on Operation Enduring Freedom—Philippines reveals a very different approach to counterterrorism and counterinsurgency from that employed in Iraq and Afghanistan, one based upon a light U.S. presence and dedication to building the capacity of capabilities of local security organizations.

Nor have all recent wars been solely or mostly irregular in character. Russia’s war in Georgia is the subject of Svante Cornell’s chapter, whereas Philip A. Petersen views Russian views of contemporary war through the lens of Russian military doctrine and exercises. The character and conduct of recent wars in the Middle East has been different still. Scott Farquhar examines the lessons the Israel Defense Force derived from the Second Lebanon War in his chapter in this section. Douglas Porch examines one of the most successful contemporary counterinsurgency campaigns, the Colombian government’s war against the Revolutionary Armed Forces of Colombia (Fuerzas Armadas Revolucionarias de Colombia, or FARC). Among other things, Porch’s essay demonstrates the importance of having capable local security institutions for implementing a counterinsurgency strategy.