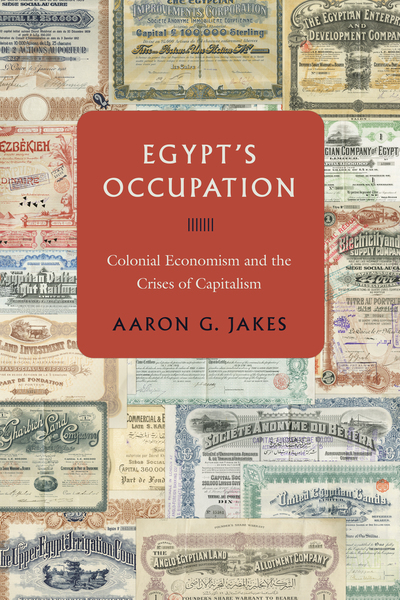 This chapter introduces two major arguments about the history of capitalism in Egypt that animate much of the narrative that follows. First, prior accounts of Egypt's "cotton economy" have focused on long-term continuities in a global division of labor between agriculture and industry; this approach has made the significance of financialization and other major transformations in the global dynamics of capital accumulation harder to discern. Second, methodological debates about economism have largely obscured the role economism has played as a form of social thought inside the history of capitalism itself. By reconsidering economism as a problem internal to liberal thought, the chapter then explains the occupation's discourse of "colonial economism" as a particular variant that treated the relationship between the economic and the political in terms of a developmental progression. Liberal political economy, on this understanding, could apply in a country like Egypt; liberal political theory could not.

This chapter recounts the spectacular elaboration of rural infrastructures that nearly all contemporary observers identified as the primary focus of the British occupation in its first decade. According to the accounts of Egypt's recent history that informed this initial phase of British policy, bankruptcy was a predictable consequence of the "despotism" that had tainted every aspect of the old regime. For years, the British claimed, the khedivial dynasty and a privileged class of rural notables had monopolized the fabled resources of the Nile Valley and squandered that vast natural bounty to line their own pockets. By reconfiguring the state as a more perfect instrument for the increase of agricultural wealth, the occupation would unleash the extraordinary productive potential of Egypt's peasant majority. In targeting the smallholding peasantry as the chief beneficiaries of "British justice," this program of infrastructural development gave colonial economism a tangible form in the rural landscape.

This chapter identifies the British takeover of the Ministry of Interior as a defining moment in both the colonial reconfiguration of state institutions and the emergence of a coordinated opposition to British rule. The overhaul of the provincial administration that followed the appointment of a British adviser to the Interior in 1894 aimed to evacuate politics from village life. In place of customary village elections, the British imposed a hierarchical system of administrative appointments that would, they promised, make local officials into faithful bureaucratic agents of agrarian reform. But as they wandered the countryside, the network of spies working for Khedive Abbas Hilmi II instead documented what they saw as a deterioration of the mores upon which good government had once rested. Keenly sensitive to the occupation's emphasis on monetary gain, their ribald accounts of drunken shaykhs, lecherous judges, and absentee governors cohere as an early critique of colonial economism.

This chapter charts the making of Egypt's fin-de-siècle financial boom. The earliest British efforts to attract foreign financial investment rested upon a controversial assertion that Egypt's peasants possessed a basic economic rationality that would allow them to employ mortgage loans as productive capital. By the late 1890s, credit experiments and tax reforms had together generated a mass of new, standardized data about the value of landed property and the extent of the country's mortgage debt. On that basis, a growing crowd of European investors began to calculate that Egypt could offer safe and substantial returns on their idle capital. The country's new financial sector mushroomed, and property values soared. Yet even as the British hailed "the Egyptian boom" as proof of the occupation's success, this wave of financial investment and speculation amplified the very rural inequalities colonial officials had promised repeatedly to alleviate.

This chapter takes up the challenge that Egypt's financial boom posed to the country's fledgling nationalist movement. Confronted with a discourse of economic improvement that appeared to be succeeding on its own terms, commentators in the budding Arabic press vied to articulate an effective and compelling case against the occupation. For some, that predicament led toward an insistence that political legitimacy could not rest on a narrow calculus of quantifiable interests. For others, British claims to economic success themselves begged closer scrutiny. The chapter first examines financial reporting from the leading nationalist papers to explore the political-economic analyses that anchored their accounts of the boom's spatial, temporal, and social unevenness. The second half then reconsiders the central set piece of prewar Egyptian nationalism, the Dinshaway Incident of 1906, to show how the nationalist press first seized upon the incident for the rejoinder it furnished against colonial economism.

5 The Many Agents of Azmah
chapter abstract

This chapter opens with a detailed account of the financial crisis of 1907, which first manifested as a crash on the Egyptian stock market but soon led to a spate of peasant mortgage defaults. It then tracks the journey of the crisis concept from a term in financial reporting to a category of everyday discourse. Through a close reading of successive efforts in the Egyptian press to explain the crisis and to pin its causes on a particular set of malicious actors, the chapter locates in the protracted experience of the crisis a series of significant shifts in nationalist conceptions of the independence they demanded. New hardship gave the lie to the occupation's claims of material improvement. At the same time, the crisis revealed the extent to which even poor farmers had come to depend on flows of foreign capital, as much as water, to sustain their very existence.

The final years of the first decade of the twentieth century witnessed an unprecedented eruption of popular political action, from the establishment of new parties, associations, and unions to the proliferation of mass demonstrations. British officials in Cairo and London fretted about the specter of revolution, and nationalist organizations made new inroads not only among urban working classes but also among peasants in the countryside. Rather than a mechanistic response to economic hardship, this chapter explains, the upsurge in political contestation was the outcome of a complex and extraordinary conjuncture of events that included the departure of Lord Cromer and the startling victory of the Young Turks' constitutional revolution. In Egypt, the keywords of the Ottoman revolution—union and progress— assumed a particular resonance as terms for grappling with the deepening entanglements between political and economic domination and for asking what it might mean to live differently after British rule.

7 Punjab on the Nile
chapter abstract

This chapter follows British efforts after 1910 to reconfigure the agrarian development regime that had once brought the occupation global accolades. Underlying plans to revive foreign investment and combat the ecological ravages of cotton cultivation, however, was a marked retreat from the premise upon which colonial economism had rested. Where once peasants were assumed to possess an economic rationality that made them capitalist farmers-in-waiting, the occupation now justified coercive farming regulations that appropriated the work of smallholders and their children by denouncing them as an irrational menace to the land and the overall material prosperity of the country. In these same years, new business ventures aimed to profit from crisis conditions by lending to the country's wealthiest landowners at inflated interest rates. The outcome was both a deepening of rural inequalities and a widespread identification of foreign financial institutions as the most immediate threat to Egypt's national wealth.

This chapter explores the form of economic nationalism that emerged in the years immediately prior to World War I. Surveying the prolonged hardship of the 1907 crisis, the leading figures of the nationalist movement lamented that even as its hegemonic pretensions rang hollow, colonial economism had remade Egyptian society in its own image. Subject to the volatilities of global commodity markets and financial flows, Egyptians appeared more and more as the self-interested economic individuals that British officials had once imagined them to be. Independence, in that sense, could no longer be treated in narrowly political terms as the mere substitution of Egyptian for British officials. Ending the occupation, on this understanding, would require as its preconditions a far more sweeping reconstitution of political-economic subjectivities and the creation of institutions to promote the growth of national capital.

This chapter carries the story of British rule through the years of World War I and the 1919 revolution. As the British scrambled to maintain their wartime protectorate in Egypt after 1919, their account of the popular insurgency reprised the central claims of colonial economism in a minor key. They had once insisted that rising prosperity would translate into political consent. Now they interpreted the eruption of agrarian unrest as the other side of the same coin. The revolt, they alleged, was simply the effect of material hardship and mismanagement of the war economy. Both renderings of the argument denied that most Egyptians were capable of genuine political thought and action. While the British extended Egypt a qualified independence, they therefore constrained popular involvement in the country's newly constituted electoral institutions. This continuation of exclusionary arrangements forged during the occupation would haunt Egyptian politics for decades to come.