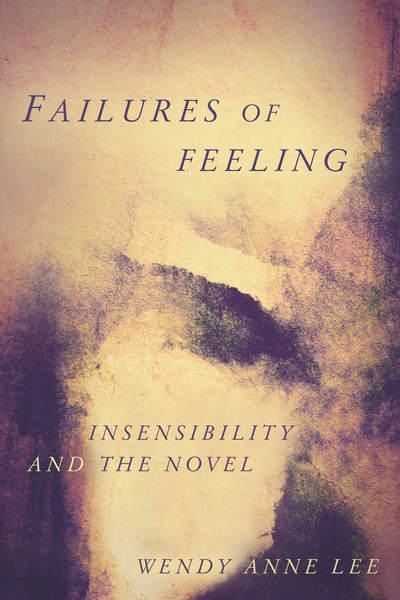 Failures of Feeling
Insensibility and the Novel
Wendy Anne Lee

This chapter locates an unlikely precursor to Bartleby in the stock figure of the prude, whose ubiquity in early print culture attests to a primary connection in the history of the novel between insensibility and gender. Diving into an elaborate, seventeenth-century taxonomy of female subjects, this discussion highlights the précieuses, a fraught libertine construction that registered the political and social discomforts generated by women's writing. Eighteenth-century English prude fictions, this chapter argues, extend the feminocentric threat of the précieuses (to estate, sovereignty, and conjugality) and import the punitive script of their transformation, a story line dedicated to the violent exposure of female feeling. The chapter concludes with a reading of Madame de Lafayette's La Princesse de Clèves, a breathtaking novel that revises and redeems Descartes's account of desire in The Passions of the Soul.

This chapter explicates Samuel Richardson's prime demonstration of the doomed logic of insensibility in European fiction, Clarissa; or, The History of a Young Lady. The so-called father of the psychological novel, Richardson distilled narrative purpose into the probing of female interiority. Newly framed by early prude fictions, Clarissa, this section argues, can be understood through a long-standing and deeply gendered anxiety about dualism, or the metaphysical gaps between sensation, speech, and action. Drawing on John Locke's concept of "indifferency" and Frances Ferguson's crucial theorization of rape and the psychological novel, the chapter spotlights the embedded narrative of Clarissa's life as an urban rape survivor. Insensibility, it argues, embeds a trenchant countermodel within a Richardsonian project.

3 The Man of No Feeling
chapter abstract

This chapter turns to sentimental fiction's man of feeling, radically reinterpreting his fine-tuned sensibility as a late iteration of sovereign contempt. In a close look at the insensible who loomed largest over the eighteenth century, Charles I, this discussion takes up the phenomenon of laughter, what Hobbes controversially defined as a triumphant glorying in the infirmities of others. Reconnecting power to humor, the analysis focuses on Oliver Goldsmith, a Grub Street writer who exploited his period's tipping point between satire and sentiment. Dissatisfied with what he regarded as the distinct humorlessness of the novel, Goldsmith turned to theater's ready-made insensible, the hero of comic misrule, Puck. Arguing for the political transformations of that figure in early modernity, the chapter depicts the "insensible cub" Tony Lumpkin in She Stoops to Conquer as the fictional force that reanimates sovereign laughter.

Chapter 4 features the figure of godlike dispassion who presides at the apex of the novel form, Jane Austen. The case of Austen's insensibility exemplifies the ways in which failures of feeling are entwined with narrative failure and how the charge of contempt so often marks a disruption to protocols of fiction. This analysis focuses on the curdled plot of Sense and Sensibility, whose stalwart Elinor Dashwood has been identified with Austen herself. Examining David Hume's Treatise of Human Nature, a text considered to be the philosophical companion to Austen's oeuvre, this chapter examines the qualities of resemblance, contiguity, and causation that conduce to sympathy in Hume's account, or what in Austen's novel makes emotion a contagion, or one sister's pain feel distressingly like the other's.

I conclude this study of insensibility with George Eliot's Daniel Deronda, a late nineteenth-century novel that draws together the different strands of the Bartleby problem presented by the book: the ridiculed dream of female sovereignty in prude fictions, the anxious and sadistic logic of the Richardsonian plot, the inevitable burnout of the man of feeling, and the compromising ethics of intimacy in Jane Austen. Eliot, this reading argues, brings these elements to bear in order to euthanize a genre that relies on the now thoroughly pathologized principle by which insensibility inflames the passions. Featured here is the character of the Alcharisi, a brilliant conflation of Diderot's paradoxically dispassionate actor and Defoe's flagrantly unmaternal mother, revived by Eliot to call out the constraints of the novel form.

The introduction lays out the book's theory at large through a reading of Herman Melville's "Bartleby, the Scrivener: A Story of Wall-Street," which features fiction's most infamous insensible, a motionless young clerk who would prefer not to. The analysis here draws on the writings of Thomas Hobbes, Adam Smith, and contemporary affect theorists to showcase and explain that signature feeling of unfeeling: contempt. Reframing the Bartleby problem from a picture of capitalist abjection to a fundamental philosophical problem about narrative, this introduction returns to the riddle of the unmoved or prime mover as the instigator of all motions and, it argues, emotions.