STANFORD
UNIVERSITY PRESS
Other Englands
Utopia, Capital, and Empire in an Age of Transition
Sarah Hogan 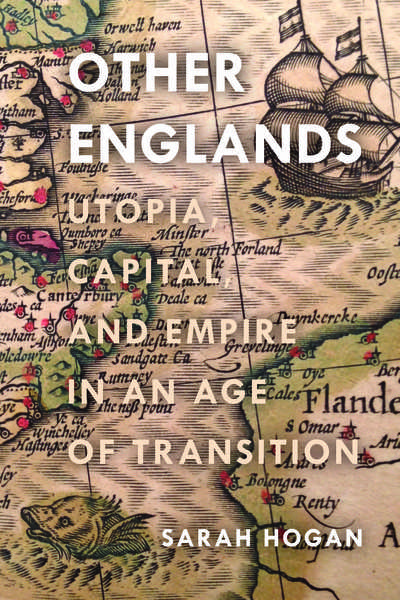 Other Englands
Utopia, Capital, and Empire in an Age of Transition
Sarah Hogan

The introduction presents the book's central argument that early English utopias reimagined the transformative geographies and social formations of emergent global capital. While explaining how this thesis builds on a rich history of Marxist readings of Utopia by important thinkers from Marx to Fredric Jameson, it also provides a lengthy overview of the modern transition debate on primitive accumulation, narrating the agrarian, mercantile, and imperial changes that initiated the transition to capitalism and shaped the formation of the utopian literary genre. The introduction locates a need for a Marxist approach to early utopias that is attentive to utopia's multifaceted, and especially colonial origins, and also to the full range of the Renaissance utopia's politics and otherworldly forms. Several early modern poetic and prose works, especially those that are shown to demonstrate the syncretic, intertextual relationship between utopian fiction, New World travel writing, and colonial propaganda, help to make this case.

This chapter offers an inquiry into the problems of conceptualizing historical transition and periodizing cultural innovation, explored through Thomas More's Utopia. It argues that Utopia was an innovative departure in the tradition of ideal states philosophy and literature, more rational and systemic in its representation but also more critically engaged with the era's problems. Examining the debate frame and class-coded character construction in Book One of Utopia, the chapter suggests that More adapts late feudal estates satire by combining it with more worldly discourses—both classical and Atlantic—in a way that reconceptualizes the social in broadening geopolitical frameworks. This reading is also supported through a genealogical exploration of Utopia's origin story, a fiction that is shown to rework ancient narratives about England's own prehistorical condition as a "peninsula made an island" into a topos that reflects the socio-spatial, Atlantic-oriented changes of the early sixteenth century.

This chapter explores early modern literature's fascination with fantastical feats of territorial engineering, considering how the spatial topoi of the island and the land bridge together represent a desire for nationalist sway over an increasingly global marketplace, and also reveal empire's contradictory desire for contact and containment. At the center of this chapter is a study of Bacon's New Atlantis, the story of Bensalem, an imaginary, insulated island that simultaneously occupies a privileged position of oversight in the world. This study argues that Bacon's text negotiates anxieties about a burgeoning world system, by allowing Bensalem to benefit from global relations without actually participating in them.

Pairing two colonial tracts on late sixteenth-century Ireland, the much-neglected A Letter Sent by I.B., by Thomas Smith and his son, and Edmund Spenser's infamous, genocidal A View of the Present State of Ireland, this chapter considers Ireland's place in the early English utopian imaginary. Focusing in particular on Spenser's tract, the chapter demonstrates that he advances a highly specific kind of colonial project, imagined in terms of moral virtue but driven by novel kinds of economic motive. The chapter considers Spenser's Irish utopia as a vision of intensified, accelerated primitive accumulation that positions the colony as a site of social experimentation meant to challenge policy at home. It also concludes with a sustained interpretation of Spenser's dismissal of greed and theft in The Faerie Queene, explored as the epic's attempt to morally differentiate English methods of land expropriation from other imperial practices and customary Irish economic relations.

This study on the poetry of Isabella Whitney and Aemelia Lanyer grants mourning, loss, and women writers their long ignored place in the early utopian tradition. In particular, the chapter considers how discourses of death and dispossession in women's poetry of place gesture toward utopia in its absence, but in such a way that progressively portrays utopia as a historical possibility. While Whitney's mock testament "The maner of her Wyll" and Aemelia Lanyer's country-house poem turned elegy "To Cooke-ham" have only very recently been interpreted separately as utopian poems, a comparison of these two works, considered in the context of Silvia Federici's Marxist-feminist intervention into the transition debate, suggests a female counter-tradition of utopian writing that adopts dispossession as a theme and imagines utopia from an explicitly socio-spatial vantage point of marginalization.

This chapter concerns seventeenth-century bourgeois utopias, exploring how writers like Gabriel Plattes and John Milton transformed the earlier literary tradition in a revolutionary context in order to attack state monopolies and defend the free exchange of ideas. That is, it complicates the easy but false equivalences between utopianism and anti-capitalism. While Plattes's utopian tract, Macaria, is shown to anticipate classical political economy's defense of free trade and discourse of "improvement," outlining the economic agenda of parliamentarian Samuel Hartlib's circle, the more famous work by Milton, Areopagitica, is shown to be a more radical, early example of critical utopianism.