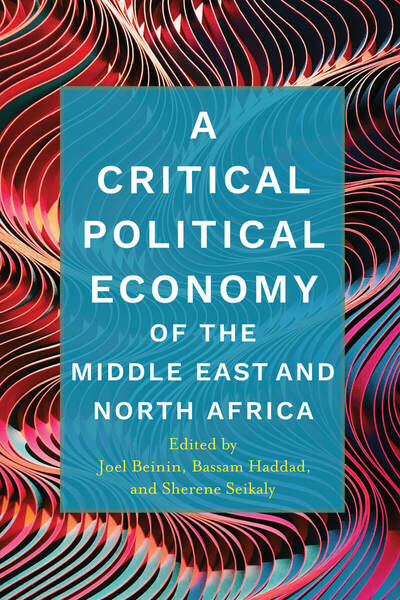 A Critical Political Economy of the Middle East and North Africa
Edited by Joel Beinin, Bassam Haddad, and Sherene Seikaly

JOEL BEININ is the Donald J. McLachlan Professor of History and professor of Middle East history, Emeritus, at Stanford University. He has written and coedited twelve books, most recently, Workers and Thieves: Labor Movements and Popular Uprisings in Tunisia and Egypt. In 2001-2 he served as president of the Middle East Studies Association of North America (MESA).

BASSAM HADDAD is the director of the Middle East and Islamic Studies Program and an associate professor at the Schar School of Policy and Government at George Mason University. He is the author of Business Networks in Syria: The Political Economy of Authoritarian Resilience, and coeditor/founder of Jadaliyya e-zine. Bassam received MESA’s Jere L. Bacharach Service Award in 2017 for his service to the profession and as executive director of the Arab Studies Institute. He is the founder of the Middle East Studies Pedagogy Project, MESPI.org.

SHERENE SEIKALY is an associate professor of history at the University of California, Santa Barbara. Seikaly’s Men of Capital: Scarcity and Economy in Mandate Palestine explores how Palestinian capitalists and British colonial officials used economy to shape territory, nationalism, the home, and the body. Her next book project, From Baltimore to Beirut: On the Question of Palestine, follows the trajectory of a peripatetic medical doctor to place Palestine in a global history of race, capital, slavery, and dispossession. She is the coeditor of Journal of Palestine Studies and cofounder and coeditor of Jadaliyya e-zine.

ZEINAB ABUL-MAGD is a professor of Middle Eastern history at Oberlin College. She is the author of Militarizing the Nation: The Army, Business, and Revolution in Egypt and Imagined Empires: A History of Revolt in Egypt. She earned her PhD in economic history at Georgetown University and BA in political science at Cairo University.

ZIAD ABU-RISH is Co-Director of the MA Program in Human Rights and the Arts and Visiting Associate Professor of Human Rights at Bard College. In 2020–21 he was the American Druze Foundation Fellow in the Center for Contemporary Arab Studies at Georgetown University. He serves as Co-Editor of Arab Studies Journal and Jadaliyya.

MAX AJL is a post-doctoral researcher at Wageningen University and an associated researcher with the Tunisian Observatory for Food Sovereignty and the Environment. His articles have appeared in the Journal of Peasant Studies and Review of African Political Economy. He writes on national liberation and postcolonial development in the Arab region.

NIDA ALAHMAD is a lecturer at the University of Edinburgh’s Politics and International Relations department. She is currently completing a book manuscript with the tentative title State Matters: Theorizing the State and Its Experts through the Iraqi Experience.

KRISTEN ALFF is an assistant professor of history and international studies at North Carolina State University. Her work focuses on business history, the history of capitalism, gender, and agrarian history of the Levant between the late Ottoman and early Mandate periods. Kristen’s book manuscript in progress is a global history of capital and property in Palestine.

SAMIA AL-BOTMEH is an assistant professor of economics at Birzeit University. Her areas of interest include gender economics and political economy of development with a special focus on Palestine.

MURIAM HALEH DAVIS is an assistant professor of history at the University of California, Santa Cruz. Her current book project investigates how colonial ideas of Islam underpinned the construction of economic planning initiatives in Algeria, from the liberal capitalist system envisioned by French planners to the socialist policies introduced by the independent Algerian state. She has articles in Journal of Modern History and Journal of European Integration, and she recently coedited an edited volume entitled North Africa and the Making of Europe: Governance, Institutions and Culture.

AARON G. JAKES is an assistant professor of history at the New School, where he teaches on the modern Middle East and South Asia, comparative studies of colonialism and imperialism, global environmental history, and the historical geography of capitalism. He is the author of Egypt’s Occupation: Colonial Economism and the Crises of Capitalism.

TIMOTHY MITCHELL is the Ransford Professor of Middle Eastern Studies at Columbia University. He teaches and writes about the politics of the Arab world, the making of economic ideas and other forms of expert knowledge, and the history and politics of energy. His books include Colonising Egypt; Rule of Experts: Egypt, Technopolitics, Modernity; and Carbon Democracy: Political Power in the Age of Oil.

AHMAD SHOKR is an assistant professor of history at Swarthmore. His writings on historical and contemporary political issues have appeared in Arab Studies Journal, Middle East Report, Jadaliyya, Critical Historical Studies, and Economic and Political Weekly. He is also a contributor to several volumes, including Dispatches from the Arab Spring: Understanding the New Middle East and The Journey to Tahrir: Revolution, Protest, and Social Change in Egypt.