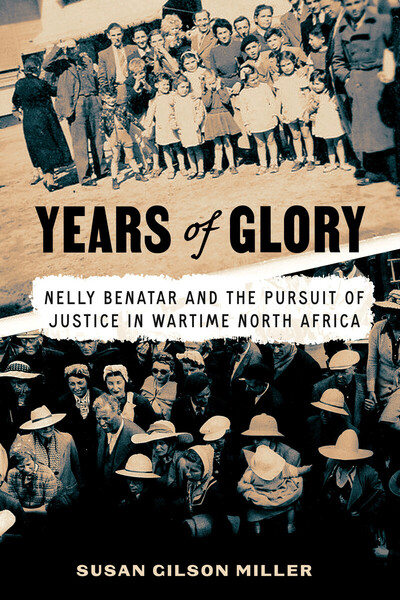 Rachel Hélène Cazes was born in Tangier, Morocco, in 1898 into a well-to-do Sephardic Jewish family. Raised in the rich matrix of Moroccan Judeo-Spanish culture, she attended the AIU schools where the educational model was based on nineteenth-century French republicanism. After passing the French bar, she became modern Morocco's first woman lawyer and practiced law in Casablanca throughout the 1930s. She became a leader of the local Zionist movement and an advocate for social reform. With her husband Moyses Benatar, she authored the Plan of Reform for the Jewish community that would lessen fiscal burdens on the poor. Rising tensions in Europe between democratic and fascist states formed the background to her work.

After the declaration of war in September, Benatar made patriotic gestures. She called on young Jewish men to sign up for a special military unit in the French army. Her efforts made an impression on public opinion, but the French Residency declined to act on their offer to serve. Meanwhile, a flood of European refugees, many of them "undesirables" recently released from internment camps in the metropole, descended on Morocco. Most Jewish refugees headed to Tangier, where entry was easier than through Casablanca. The influx of European Jews in Tangier upset community relations, causing a rupture between local Jews and the new arrivals. Mediation by international Jewish organizations did little to lessen tensions.

During the "phony war," Benatar trained as a nurse with the French branch of the International Red Cross. She was about to leave for France when the Armistice was declared between France and Nazi Germany. Following the exodus, thousands of refugees arrived in Casablanca from France; Benatar took charge of a program of relief—financed by the local Jewish community—offering shelter and other assistance to refugees. Popular paranoia about the "danger" refugees presented complicated her task. Some were sent by the administration to internment camps near Casablanca; others were sent to more remote towns in "forced residence." Benatar played a key role in the triage of new arrivals. At the same time, she lived a double life as a member of the local anti-fascist Resistance, using information gleaned from clandestine sources to help escaped soldiers secretly cross the Strait of Gibraltar and return to their Allied commands.

The Casablanca Route opened in 1941 when the Vichy regime began issuing exit visas to refugees heading to the New World. The route took passengers from Marseilles to Martinique; from there they traveled south to Latin America or north to the United States. Working closely with the Jewish emigration agency HICEM, Benatar assisted thousands of these migrants. She also aided Spanish republicans, imploring Resident-General Noguès to renew an expired nonextradition treaty that put them beyond Franco's reach. Benatar's refugee work came to the attention of the German Armistice Commission in Morocco. Theodore Auer, head of the commission, tried to shut down her operation, but she had the protection of Resident-General Noguès. Vichy continued its relentless persecution of Jews, imposing severe restrictions on professions, property, and other basic rights. Benatar was disbarred but continued her refugee work and endured periodic invasions of her office by the Gestapo.

We can imagine the life of a refugee stranded in Casablanca through letters, newspapers, memoirs, and other written and visual material in public archives. It was a struggle to gain access to food, clothing, work, shelter, and medical help. Quaker representative Leslie Heath arrived in Casablanca in the summer of 1942 and joined forces with Benatar, creating a strong mutual bond. Together, they verified reports of Vichy prison camps in the south of Morocco, where the Vichy had revived building of the Trans-Saharan Railway, a long-standing colonial project, using forced labor. The all-Jewish labor camp at Berguent was of special interest to Benatar. She began a correspondence with the men there, and by the time of the Allied landing in November, she was a known figure throughout the Vichy camps' system.

Following the November 1942 landings, the Allies tried to liberate the forced labor camps, but the French military command was obdurate. The Allied need for workers finally forced the French to reconsider the request. Benatar's role in liberating the camps was a crucial one. She and her team made site surveys in February that convinced the Residency to allow widespread prisoner releases. Many of the released men began found employment with the Allies. The world of refugee relief moved from the local to the international level after the creation of UNRRA. Working with the new government in Algiers in late 1943, Benatar joined a group of pro-Gaullist political activists, using her lawyerly skills to plead individual cases aimed at restoring refugee rights and punishing perpetrators of human rights abuses that took place under Vichy.

7 1944: The Right to Have Rights
chapter abstract

UNRRA opened its first refugee camp at Fedala, Morocco, receiving groups of survivors from Nazi occupied Europe. As the JDC representative, Benatar used her legal expertise and familiarity with French officialdom to create new identities for stateless refugees. Her "Essay on Refugees" was meant to serve as a guide to fellow caseworkers in the UNRRA system. The innovative ideas in this essay foreshadow international methods for the treatment and postwar settlement of displaced persons. Benatar was selected as a Moroccan delegate to the World Jewish Congress of 1944, proposing a radical agenda for the reform of the Moroccan Jewish community. She was not granted a US entry visa. Instead, in November, she joined the staff of the new UNRRA camp at Philippeville, continuing her service as a welfare officer.

8 1945: The Shock of Recognition
chapter abstract

As the war entered its final phase, survivors of the death camps began to trickle out, offering living proof of Nazi atrocities. Benatar witnessed their suffering at Philippeville, when ex-inmates of Bergen Belsen arrived in terrible shape. Through complex negotiations with French authorities, she arranged for the repatriation of refugees wishing to return to France; at the same time, she worked with the JDC to facilitate the migration of Jewish refugees to Palestine. Finding transport for the millions on the move was a major challenge. Benatar used her knowledge of bureaucratic methods and mentalities to speed repatriation and resettlement. She continued this work until the last days of the war.

9 After the War
chapter abstract

Benatar joined the JDC emigration department in Paris after the war with the goal of resettling "the last million." Differences between Benatar and her American supervisor, along with the heavy caseload, made the work very difficult. She campaigned to end the condition of "statelessness" by assisting refugees to find new homes. In 1951, she left the JDC and returned to her law practice in Casablanca. Increasing numbers of Jews were fleeing Morocco; in 1956, when Morocco became independent, the outflow accelerated. With the Arabization of the Moroccan legal system in 1962, Benatar reluctantly followed her family into exile. Resettled in Paris, she passed the French bar and resumed her legal practice. She died in 1979, her wartime achievements largely unrecognized.