STANFORD
UNIVERSITY PRESS
Whose Life Is Worth More?
Hierarchies of Risk and Death in Contemporary Wars
Yagil Levy 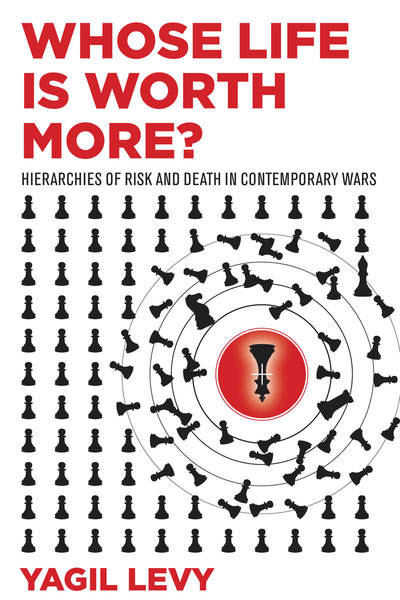 Whose Life Is Worth More?
Hierarchies of Risk and Death in Contemporary Wars
Yagil Levy

Contents
Introduction
Contents and Abstracts
1 Introduction: What Determines the Value of Life, and How Has It Been Studied?
chapter abstract

This chapter presents the rationale and scope of the book, maps the scholarly gaps that the book addresses, and introduces the argument and outline.

This chapter presents the theoretical framework of the book. As argued, states develop a death hierarchy on which the positions are mutually exclusive—different groups are not exposed to the same risk levels simultaneously—but variations in the risk level of one group affect the others. The death hierarchy exposes different groups to varying degrees of risk through management of the use of force. Multiple military variables determine how force is used, but the operation of these variables is mediated by the interaction between two sets of legitimacies forming the determinants of the death hierarchy: the legitimacy of using force and the legitimacy of sacrificing.

3 How to Identify Variations in Risk Transfer
chapter abstract

4 Risking One's Own Soldiers in Jenin and Basra
chapter abstract

This chapter analyzes the basic variation on the death hierarchy—the risking of one's own soldiers. Risking the lives of one's own is at the core of the contract between a soldier and the state, with unlimited liability expected. Nevertheless, historical changes shifted this risk from upper- to lower-class soldiers. This chapter focuses on two variations on the hierarchy that were thus created: risking upper-middle-class soldiers, as exemplified by the Israeli case of the battle of Jenin (West Bank) in 2002, and risking lower-class soldiers, as exemplified by the British case of the battle of Basra (Iraq) in 2006<->-2007.

6 Strategic Transfer of Risk in the Kosovo War
chapter abstract

Increasing the level of legitimacy of using force may compensate for the low level of legitimacy of sacrificing when the demand for using force is on the rise. By legitimizing the use of excessive lethality, risk can be transferred from soldiers to enemy noncombatants; this would be a form of active force protection. This chapter offers an analysis of the strategic form of risk transfer, when decision makers decide to refrain from deploying ground forces, as represented by the case of the Kosovo War of 1999. The chapter demonstrates how the interplay between the two legitimacies changed during the war, allowing NATO to escalate its airstrikes on Serbia and hence increase the collateral killing of noncombatants. To validate the main conclusions, the drone warfare in Pakistan is briefly analyzed.

7 Tactical Transfer of Risk in Fallujah and Gaza
chapter abstract

This chapter shows how risk can be shifted at the tactical level when decision makers decide to deploy ground forces but also adopt tactics that shift at least part of the risk from own soldiers to enemy noncombatants. Risk transfer can best be demonstrated by comparing cases or deployments to identify variations over time. Therefore, two sets of serial cases are presented: the two US-led campaigns to capture the Iraqi city of Fallujah in 2004 and Israel's campaigns in Gaza from 2006 to 2014. As the cases show, the legitimacies change dynamically and may alter the hierarchies during the same campaign, often following initial achievements, failures, and obstacles.

8 Re-Risking One's Own Soldiers: The Surge in Iraq and Afghanistan
chapter abstract

Recognizing situations in which harming noncombatants provides less, rather than more, protection to own civilians and ultimately puts the soldiers themselves and the mission at risk, may cause political and military leaders to remodify the death hierarchy. This chapter focuses on this situation in which soldiers are risked again. Following a general overview of this shift in Iraq, which formed the surge of 2007, a more detailed analysis is presented, focused on Operation Moshtarak in 2010 in Afghanistan.

The chapter first offers a few concluding remarks about the interaction between the legitimacies. It then gives a detailed analysis of the inferences yielded by the combination of the three categories of fatality ratios and summarizes the methodological aspects of the study