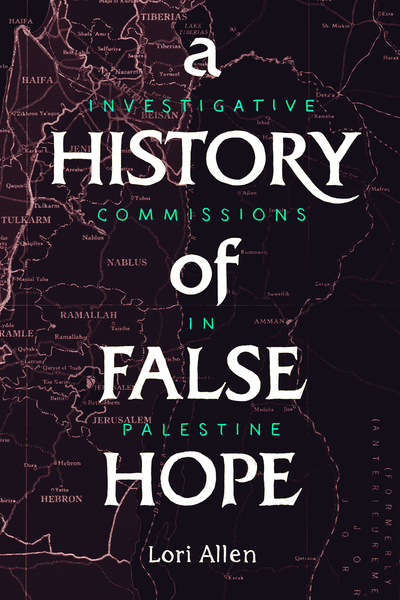 Contents
Excerpt from Introduction
Contents and Abstracts
Introduction: International Law as a Way of Being
chapter abstract

International commissions are regularly dispatched to investigate the problem of Palestine but have never formulated the political decisions that were put into practice. In introducing the commissions that are the focus of this study, the Introduction sets out what is at stake in this seeming paradox. It poses questions about the broader social and ideological effects of investigative commissions and how they spread liberalism's ideals through international law's institutions. This book explores the habitus of international law and takes legal rules as the "negative space" of analysis in order to look at law as an emotionally charged space of action. It proposes a way to think anthropologically about liberalism as an embodied and affectively charged way of being and makes an argument for the political and scholarly importance of exploring international law ethnographically.

In 1919 US President Woodrow Wilson sent the King-Crane Commission to the Arab region to assess public opinion in order to advise the Paris Peace Conference delegates regarding political transition after the Ottoman Empire's demise. The investigators found that the Arabs, including people who were coming to identify as Palestinian, had a clear vision for a democratic system of governance that would include constitutional guarantees for minority rights with special consideration for the rights of Jews as equal citizens. The commission was a first forum in which Arabs developed public hope that a liberal international order would include them in a nation-state of equal stature to others of the international community. Despite expressing their demands in the reasonable language of international law, the Great Powers granted the Palestine mandate to Great Britain. A full cycle of the hope and disappointment that would mark future international interventions in Palestine was complete.

2 Universalizing Liberal Internationalism: The Arab Revolt and the Boycott of the Peel Commission
chapter abstract

By the time the British appointed the fateful Royal Peel Commission in 1936, the Arabs were declaring publicly that they had "no hope in the fairness of the government and thus, they see no point in cooperating with its Commission," as Palestinian leader Hajj Amin al-Husayni explained. Great Britain's penchant for sending investigative commissions to Palestine while continuing their mandate in a way that supported the Zionist project led Palestinians to boycott the Peel Commission—which would nevertheless go on to recommend the partition of Palestine into distinct Jewish and Arab entities. This chapter explains how the Arabs' initial rejection of the Peel Commission during the 1936–1939 Arab Revolt was enabled by the transnational development of an anticolonial world and its distinctive universalizing discourse not subsumed by the League of Nations or its articulations of international law.

3 The Humanitarian Politics of Jewish Suffering: The Anglo-American Committee of Inquiry
chapter abstract

Demands being made of Palestinians to prove their political credibility changed yet again after World War II. When the Anglo-American Committee of Inquiry was dispatched in 1946 to "examine the question of European Jewry and to . . . review the Palestine Problem in light of that examination," shifts in the overlying and underlying principles guiding assessments of Palestinian readiness for sovereignty became apparent. It is in the Anglo-American Committee of Inquiry that the newly crystallized political epistemology of suffering, sympathy, and humanitarianism comes into the frame, the moment when sympathy for Jewish suffering becomes the barometer of liberalism. In describing how Palestinians, Arab leaders, Zionists, the British, and Americans debated how to fulfill humanitarian ideals that prioritized helping the displaced Jews of Europe, this chapter demonstrates how the policing of affect is a fundamental part of how international law functions.

In 1969, the UN General Assembly established the Special Committee to Investigate Israeli Practices Affecting the Human Rights of the Population of the Occupied Territories. It became a matrix pulling a steady stream of Palestinians into the UN's instantiation of the liberal-legal order, continually reinstilling hope among an ever-wider array of Palestinians in international human rights and humanitarian law. Debates about this committee reveal how many at the UN believed that solving the Palestine issue through international law was synonymous with the mission of the UN itself. This equation turned the UN into a hothouse of hope for Palestinians in the 1960s and 1970s, fostering an expectation that there is an "international community" that cares about their predicament and can wield international law to do something about it. Third World solidarity for Palestinians at the UN cultivated a false hope in international law.

5 The Silences of Democratic Listening: The Mitchell Committee
chapter abstract

Just as sympathy for Jewish suffering became the requirement of the good liberal after World War II, showing a balanced compassion for the feelings of all was the mark of the new millennium's properly sympathetic liberal subject. This chapter provides an ethnographic account of the Mitchell Committee, a US-led fact-finding group that investigated the actions of Palestinians and Israelis during the second intifada that began in 2000. These "democratic listeners" prioritized the enactment of liberal communicative ideals, imposing false equivalences between occupier and occupied in a way that allowed apparent evenhandedness to displace legal principles. Palestinians, in contrast, reasserted their contention that the precepts of human rights and humanitarian law should be core to the conflict's solution. Not only did they look to international law for confirmation of Palestinian political positions, but also for validation of their moral claims and lived experience.

This chapter examines several UN investigations with a focus on the controversial Goldstone Mission's 2009 investigation into fighting in the Gaza Strip. It explores why many saw the Goldstone report that named some Israeli and Palestinian actions as possible war crimes as a turning point toward finally holding perpetrators of egregious violations accountable. It analyzes the liberal practice of redemptive witnessing and the intensifying discourse of crime and punishment that swirled through these commissions, and shows how the International Criminal Court and other international legal innovations inspired in Palestinians renewed hope in international law.

Conclusion: Toward an Anthropology of International Law, and Next Time and Again for Palestine
chapter abstract

Engaging with a range of scholarly takes on law as an ideological social field, from Pierre Bourdieu to E. P. Thompson, the concluding chapter reflects on what a more thoroughly ethnographic and subaltern studies approach to questions of international legal hegemony might offer to our understanding of liberalism and Palestinian politics. The moments of history recounted in this book show how Palestinians held tight to liberal values and employed international legal tools to make their case because they were liberals who believed these values and principles to be a means to justice. This history gestures at why such an embroilment with international law matters; it has produced repeatedly unfulfilled promises and hopeful expectations and has occluded of other forms of action, argument, and resistance.