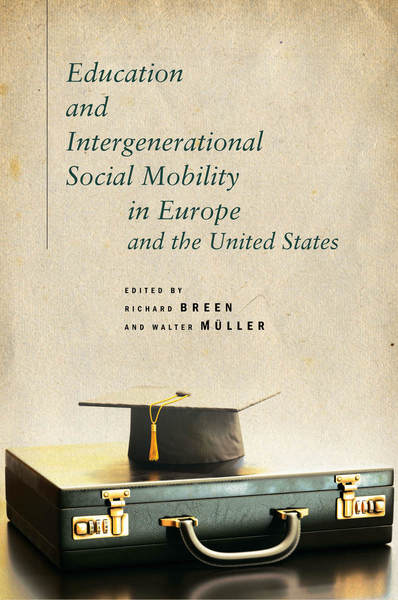 This chapter sets out the main goal of the volume: to examine the role of education in shaping rates and patterns of intergenerational social mobility among men and women during the twentieth century. This is a particularly timely question given the concerns of politicians and policy makers with intergenerational mobility and their belief that the solution lies in education. The chapter explains what we mean by social mobility and the distinction between absolute and relative mobility, and it sets out the reasons why we expect changes to the educational system to lead to changes in both absolute and relative mobility. The chapter discusses the reasons for choosing the eight countries on which we focus: the United States, Sweden, Germany, France, the Netherlands, Italy, Spain, and Switzerland. The operationalization of our main variables is explained and the questions to be addressed in each of the subsequent country chapters are set out.

All the country chapters in this volume use the same set of methods, and this chapter explains them in simple and accessible terms. These methods include descriptive statistics for the analysis of absolute mobility, the use of log-linear models for the analysis of relative mobility or social fluidity, and simulations to assess the role played by educational equalization and educational expansion in shaping trends in social fluidity.

This chapter investigates intergenerational class mobility in the U.S. during the twentieth century. It describes absolute and relative mobility trends and explores the role of educational expansion in shaping them. Analyses are based on data from several nationally representative surveys (GSS, OCG-II, SIPP, and PSID). As a consequence of massive occupational and educational upgrading, upward mobility increased over most of the century. The role of education in contributing to absolute class mobility changed across time: Class gaps in education as well as class returns to education equalized initially, but became more polarized among recent cohorts. Relative mobility trends differed by gender: After an initial surge in fluidity for both, mobility chances remained stable for women but increased further for men. Rising fluidity among men is mostly due to increasing college graduation rates (i.e., the compositional effect), whereas educational trends contribute little to understanding the stability of women's mobility chances.

Sweden was renowned for attempting a "middle way" between capitalism and socialism, with a market economy combined with ambitious policies for equalizing both opportunities and living conditions. Did this facilitate social mobility, and was equalization of educational attainment the mechanism behind it? We document increasing social mobility during a period of strong growth of higher class occupations, both for men and women, an increase that, however, tends to level off for cohorts born in the mid-1960s. We also verify that most of this development into a more socially open society was due to the equalization of educational outcomes. However, the very substantial growth of upper secondary and tertiary education also contributed, because this expansion meant that more people in younger cohorts received higher education where, in Sweden, the importance of social origin for class destinations is considerably weaker than at lower levels of education.

5 Intergenerational Mobility and Social Fluidity in France over Birth Cohorts and Age: The Role of Education  Louis-André Vallet
chapter abstract

Using the 1970, 1977, 1985, 1993, and 2003 Formation et Qualification Professionnelle (INSEE) surveys, this chapter analyzes how intergenerational social mobility and social fluidity have evolved in France for men and women born between 1906 and 1973. It demonstrates that the statistical association between class of origin and class of destination has become weaker in recent cohorts than in older ones, and also that the same association diminishes with age, i.e., along the occupational career. It demonstrates that change in education has played a key role in the process of increasing social fluidity. In the 1945–54 cohort, the reduction in inequality of educational opportunity is the main factor and the educational expansion is the secondary factor for explaining the reduction of the association between class of origin and class of destination, but the relative importance of these two factors is reversed in the 1955–64 and 1965–73 cohorts.

The chapter examines the role of education in social mobility among men and women in Germany during the twentieth century. It analyses two pathways of how a person's social class origin affects her or his own class position: First, an education-mediated path, where a person's social origin influences her or his educational attainment, which in turn influences the social class position she or he attains in adult life. Second, a path that comprises all the mechanisms not related to formal education by which social origins influence an adult's social class position. Using data from various large-scale survey programs (ALLBUS, SOEP, NEPS), and based on log-linear modelling and decomposition methods, the chapter shows that in the long run social fluidity increased and that this is mainly associated with a decline in educational inequality and with an strong educational expansion for both men and women over the twentieth century.

Until fairly recently little was known about trends in intergenerational social mobility in Switzerland and the mediating role of education in this process. With lasting high standards of living, big shares of vocational education and training (VET), and wide development of tertiary sector, Switzerland constitutes an interesting case to test modernization theory. Yet this analysis, drawn from a tailor-made dataset constructed from nineteen surveys representative of the Swiss population and collected between 1975 and 2013, leads us to reject expectations from this theory. While educational reforms have contributed to increase access to postcompulsory education, the influence of social background on educational attainment and on occupational destiny has not substantially declined throughout the twentieth century in Switzerland. In light of all this, and despite its economic prosperity and its high standards of living, Switzerland remains far from being a social mobility El Dorado.

The Netherlands is well known for a sustained and marked trend towards greater social fluidity during the twentieth century. This chapter investigates trends in mobility across birth cohorts of Dutch men and women born in the first three-quarters of the twentieth century. During this time there was also a rapid upgrading of the Dutch class structure and marked expansion of the educational. But education played only a limited role in driving the increase in social fluidity: rather it was due mostly to the growing shares of people from nonservice-class origins who lacked a tertiary qualification but nevertheless moved into service-class destinations. An oversupply of service-class positions, relative to the share of people with a tertiary qualification, allowed less-qualified men and women from less-advantaged class backgrounds to be upwardly mobile.

In this chapter we assess whether changes in educational participation have fostered changes in social fluidity in Italy over the twentieth century. By means of log-linear unidiff models and of multinomial logistic regressions, we show that a significant decline of schooling inequalities during the so-called economic miracle fueled an increase in social fluidity, in a context where the association between education and class destinations weakened only slightly. Direct inheritance also declined to some extent in the postwar period. These equalizing trends occurred for both men and women, but were stronger among women, and involved primarily, though not exclusively, the agricultural classes. However, all these trends have flattened out in the youngest cohorts, where social fluidity is highly inertial. Since the process of occupational upgrading has halted in recent decades, the recent stability of relative mobility involves also the stagnation of absolute mobility.

This chapter studies long-term trends in intergenerational class mobility in Spain across the twentieth century drawing from a large pooled dataset (n = 81,475). From the 1960s, Spain underwent a late but intense economic, cultural, and political modernization process. During this period of far-reaching institutional change, men and women experienced a significant increase in upward mobility rates and social fluidity: steady and substantial for women, more modest for men. We disentangle different pathways driving this change in social fluidity using counterfactual simulations. The main drivers of the observed equalization of opportunities were the educational expansion and the direct effect of social origins. We argue that women were particularly benefited from dramatic structural changes in labor force participation, occupational upgrading, and educational expansion in which more room at the top allowed disadvantaged social classes to depart from their origins.

Summarizing the findings of the country chapters, this chapter addresses the question: How did intergenerational social mobility change over cohorts born in the first two-thirds of the twentieth century? What role, if any, did education play in this? As education expanded, its association to class origins weakened, especially among earlier-born cohorts—a strong indication that growing education equalization may have been important in increasing social fluidity. There is also a strong link between upward mobility and social fluidity, the former mostly driven by the expansion of higher-level white-collar jobs. Educational expansion, equalization, and rapid structural change in the US and European economies all contributed to greater social fluidity among people born before the middle of the century. For people born later, rates of downward mobility have increased: however, despite the lack of further educational equalization and less-pronounced structural change, social fluidity has remained unchanged.