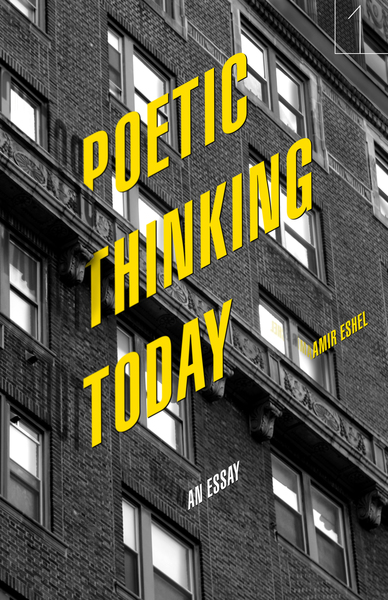 The Introduction presents Hannah Arendt's question "Is there a way of thinking that is not tyrannical?" as the theoretical framework of the essay. Elaborating on Arendt's notion of poetic thinking, the chapter outlines key features of this alternative form of thought: thinking as it is embedded in an artwork; free of the systematic methods characteristic of the natural sciences; open-ended reflection on some of the most important questions of our lives, such as "Who are we?" and "How should we live?" The pursuit of an ethical life implied in these questions, the Introduction argues, is equally at play in Yehuda Amichai's poem "The Place Where We Are Right" as it is in Richard Rorty and Hilary Putnam's philosophical plea for a postmetaphysical ethics. These varied forms of thinking are all equally crucial as we strive to counter tyranny and cultivate freedom in thinking and in political action.

The poetry of Paul Celan and Dan Pagis exemplifies poetic thinking in its free, imaginative search for a new ethics in our time. Writing in the wake of the Holocaust, both poets point to modern poetry's capacity to express the difficulty of reaching definitive conclusions in ethical deliberations and thinking in general. While both Celan's and Pagis's poetry suggests a move toward a postmetaphysical ethics, this chapter argues that neither poet retreats into relativism or nihilism. Instead, Celan's poems explore the relationship between I and Thou, with the hope that poetry can serve as a "school of real humanity." Pagis's work signals the imperative of paying attention to human suffering and pain rather than resorting to abstractions such as "justice." Moving in this direction, his poetry suggests, may help with some of the most intricate challenges we face, such as reaching peace between Israelis and Palestinians.

For five decades, Gerhard Richter used paintings, short essayistic prose, and interviews to reflect on the possibility of reacting to the Holocaust in his art. His doubts echoed the philosophical challenge expressed by Theodor Adorno about the possibility of art after Auschwitz. This chapter traces the evolution of Richter's thoughts up to the painter's final breakthrough in 2014: the abstract painting cycle Birkenau. Richter's poetic thinking on creating an image following the catastrophe of the Nazi extermination camps led him, the chapter suggests, to create an abstract space of and for reflection on the human capacity to act. In proximity to Hannah Arendt's notion of action, Birkenau is a visual meditation on our ability to insert ourselves into the world of human affairs with words and deeds. Art after Auschwitz cannot be about the event but rather an acknowledgment of human agency in shaping our communal lives.

Dani Karavan's environmental sculptures react to what Hannah Arendt diagnosed as one of the hallmarks of our age: the decline of the public realm and of the freedom it affords us to engage in political action. Karavan's works in Israel, Germany, and elsewhere evoke the political disasters that resulted from the shrinking of what Arendt calls "the space of appearance," the space where politics is visible and viable. This chapter argues that Karavan's poetic thinking in constellations of white cement, stones, trees, and water also acts against this tendency by giving those who dwell in the sculptor's environments an opportunity to encounter and recognize other human beings, to realize the role of politics in protecting our freedom. Wherever it is displayed, Karavan's work allows us, in Arendt's words, to "come together in the manner of speech and action," thus resisting all forms of tyranny.

The tide of free creative expression has soared in recent decades because of enormous technological innovations. While this marriage of creativity and technology gave birth to a new, poetic age, technological tools such as surveillance, social media, and drone warfare threaten our freedom in unprecedented ways. Laura Poitras's cinema and museum installations think through this juncture. Provocative, and accessible through multiple media channels, Poitras's art spreads the poetic thinking, which we used to encounter in poetry, painting, or sculptures, instantaneously across the world. The accessibility of Poitras's work may also be employed in our education systems. Presenting the Lacuna annotation tool, the essay argues that technology may be effective in cultivating the free, creative exchange for which poetic thinking stands. But, as in all other public domains, technological tools must be employed cautiously since the danger of tyranny and tyrannical thinking looms in education as well.