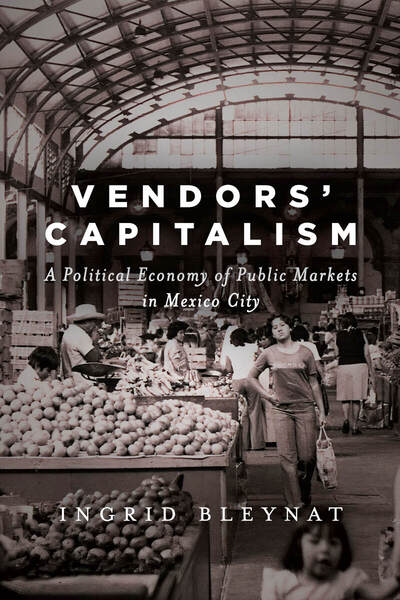 During this period Mexico City's public market vendors were providers of a key public service and protagonists in the multiple overlapping conflicts generated by economic development. Neither wage workers nor capitalists, market vendors remained locked in a proprietary mode of production, working for themselves, perhaps with the help of their families, running small-scale operations with little if any capital. This proprietary mode of production expanded together with capitalism throughout the twentieth century, interacting through supply chains, credit arrangements, and other economic relations. This book argues that the complex class antagonisms that market vendors experienced with capitalists and workers, as well as bitter competition among vendors themselves, had consequences far beyond public markets and the local economy; the interventions made by public officials and politicians to resolve these conflicts involved institutional innovations that also extended the reach and the capacity of the state.

The relationship between market vendors and the Ayuntamiento de la Ciudad de México was at the heart of the moral economy of the capital of the Restored Republic (1867–1876). Market vendors generated a significant portion of the council's yearly fiscal income, driving the ayuntamiento to seek ways to expand the number of fee-paying stalls and raise the rates they paid. Yet local officials also responded to an imperative to show compassion toward vendors, a combination of councilors' private Catholicism and political good sense. Councilors' concern with the plight of the poor often trumped their fiscal prudence, so petitions for reductions in market fees were frequently answered favorably. But the same moral economy precluded vendors' participation in the public sphere, where politicians, councilmen, and journalists discussed market policies and, more generally, constructed their version of the common good.

After 1880, a capitalist boom took hold of Mexico. The combination of economic growth and political stability allowed politicians, businessmen, and journalists to entertain the fantasy of transforming Mexico City into a modern metropolis, worthy of their imagined Republic. The city council contracted out the building of elegant iron and glass halls and passed bylaws stipulating acceptable and unacceptable forms of vending. Yet old market practices persisted. Many vendors continued to set their stalls on the city's streets and the new halls remained undersubscribed. A repressive consensus emerged in the 1890s, leading to the criminalization and police harassment of all vendors outside the officially sanctioned halls. A new differentiation emerged among the city's proprietary vendors, as those who became locatarios by joining the new markets supported the changes, including the repression of street vendors with whom they competed for customers. The city council would not survive these transformations.

The year of 1903 marked a turning point in the history of Mexico City, as the ayuntamiento was stripped of its powers. Responsibility for the management of markets was dispersed across multiple ministries creating power vacuums that brought uncertainty to stallholders. Vendors began to enunciate their collective grievances, and during the Mexican Revolution they adopted the political lexicon of the period's proletarian struggles, forming unions that joined the new workers' confederations. Vendors repeatedly challenged the postrevolutionary authorities, and during a demonstration against a hike in market fees two vendors died and eleven were wounded at the hands of local government forces. While journalists exonerated vendors of any responsibility for the deaths and injuries, they simultaneously reduced them to passive victims, denying them political agency. But vendors had discovered novel ways to defend their material interests, and sooner or later the authorities would have to reckon with their organizations.

4 Political Experimentation in a Time of Crises, 1929–1945
chapter abstract

In 1929 the federal government created the Consejo Consultivo. This body was designed to act as the intermediary between the state and the city's popular classes. But when the proliferation of street stalls became once again a major source of tension, the consejo faltered. From 1932 the Department of the Federal District poured resources into public markets. But building halls was not enough. Without effective institutional mechanisms to manage competition between vendors, even the flagship Abelardo Rodríguez Market foundered due to conflicts among market and street vendors. In 1936, facing worker unrest due to rising inflation, President Lázaro Cárdenas intervened to protect the purchasing power of wages by imposing price controls on everyday necessities, further compromising vendors' slim profit margins. The highly contested 1940 presidential election alerted Cárdenas's successors to the risks of alienating the city's vendors, spurring their determination to gain greater control over their organizations.

In 1946, organized vendors joined the new Partido Revolucionario Institucional (PRI) through the Confederación Nacional de Organizaciones Populares (CNOP). The incorporation of the self-employed popular classes into the PRI through the CNOP was the key innovation of the political economy of the period. It was also the result of two decades of government efforts to mediate vendors' social relations. While state actors used new political connections to reconfigure the vendor movement, vendors used the PRI to channel demands, requesting state intervention to upgrade markets and provide social services. Between 1952 and 1966, the Department of the Federal District built 160 markets with capacity for over fifty thousand stalls. In these markets proprietary traders earned their piece of the Mexican miracle. Nevertheless, tens of thousands remained on the streets, where they suffered the repressive side of Mexico's state-led development.