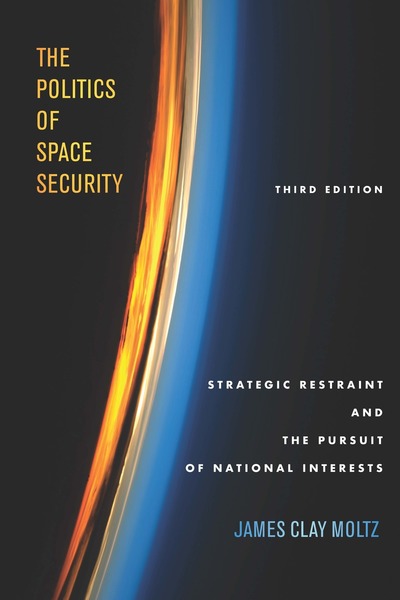 This section discusses two competing visions for space security—space weaponization and space sanctuary—in the context of emerging threats. It outlines the chapters in the book and proposes an alternative argument to existing approaches based on the concept of "environmental security" and military restraint in the face of such threats as man-made nuclear radiation and orbital debris.

This chapter begins by defining "space security" and then provides a short history of the international politics that have surrounded this term since 1957. Next, it analyzes four analogies that have been used in the international relations literature to try to explain and predict space competition and cooperation: the New World, sea power, air power, and the Antarctic. After noting how actual space dynamics have differed from each of the analogies, it then summarizes the existing literature on international space activity, grouping authors into four main schools: space nationalism, global institutionalism, technological determinism, and social interactionism. It concludes by suggesting a new approach to space based on concepts related to collective goods and environmental management.

This chapter discusses space security as an evolving environmental management challenge, looking particularly at the risks posed to space activity from man-made radiation caused by nuclear testing in orbit from 1958 to 1962 and, later, from orbital debris created by anti-satellite weapons tests and other sources. It then lays out an argument based on gradual state learning about "collective bads" in space and the development of self-interested strategic restraint. The chapter considers a counterfactual case of non-learning and extensive weaponization in space, which would have left space unusable for other purposes. It then examines how actual learning occurred—through critical events such as the 1962 Starfish Prime nuclear test—and how this learning was institutionalized through formal and informal international agreements.

This chapter provides a detailed political history of the space age up to 1962. It begins by examining the different political and strategic factors affecting U.S., German, and Soviet rocket activities in the 1920s and 1930s. It then looks at why Nazi Germany surged ahead with the V-2 missile, and how both the U.S. and Soviet space programs benefited after the war from German missile technology. The chapter next discusses why the Soviet Union treated missile development as a top priority program after 1945, while the United States—with its extensive bomber forces and nuclear advantage—did not. Finally, it looks at the rising competition between the two programs after Sputnik's launch in 1957 and the assumption of both sides that space would soon become a venue for war.

This chapter explains how shared fears about the effects of orbital nuclear testing on space activity, after the U.S. Starfish Prime nuclear test in July of 1962, caused the first set of U.S.-Soviet agreements on cooperative restraint in space. This led to the signing of the 1963 Partial Test Ban Treaty and two U.N. resolutions on space restraint, which were later codified in the 1967 Outer Space Treaty. The chapter traces the shift of U.S.-Soviet space competition toward passive military programs and civil space activity, such as the Kennedy-inspired Moon race, won by NASA in 1969. The chapter discusses the détente era, the signing of the Anti-Ballistic Missile Treaty and the SALT I agreement (which banned attacks on verification satellites), and the waning of space cooperation following the joint Apollo-Soyuz mission in 1975.

5 Challenges to Space Security and Their Resolution: 1976–1991
chapter abstract

This chapter examines rising U.S.-Soviet space tensions in the late 1970s and early 1980s, their decline after the Gorbachev reforms, and then their sudden end with the Soviet Union's break-up in 1991. It begins with the decline of détente and the restarting of the Soviet kinetic-kill, anti-satellite program, which led to reciprocal development efforts by the United States. President Reagan's Strategic Defense Initiative in 1983 further increased U.S.-Soviet tensions, with its plan for space-based lasers and interceptors and an end to the ABM Treaty. The U.S. test of a kinetic anti-satellite weapon in 1985 raised new understanding about the risks of man-made orbital debris, causing changes to U.S. military practices regarding space. By the end of the period, Soviet reforms created new opportunities for space cooperation, including renewed scientific exchanges and bilateral discussions on limiting orbital debris.

This chapter begins with the story of how U.S.-Russian space cooperation with the Russian Mir space station and the U.S. space shuttle expanded into Russian membership in the U.S.-led International Space Station (ISS). The chapter also tracks U.S.-Russian disputes over missile defenses and the ABM Treaty during the 1990s, as well as the end of international negotiations in Geneva on the Prevention of an Arms Race in Outer Space (PAROS). It then discusses the remarkable growth of commercial cooperation between Russian space enterprises and U.S. corporations. But the chapter also describes how the near-collapse of Russia's early-warning network in space led to new concerns over crisis stability. By the end of this period, President Clinton had elected to remain in the ABM Treaty, but Congressional Republicans called for an end to the cornerstone of space security with Moscow, setting up a likely confrontation.

This chapter analyzes the Bush administration's space policy, the U.S. withdrawal from the ABM Treaty, and the return of space nationalism. It also examines China's emergence as a major spacefaring nation with its Shenzhou V manned flight, as well as China's controversial decision to test a kinetic anti-satellite weapon in 2007, creating a cloud of long-lived orbital debris. The chapter discusses the rise of new commercial space companies, such as SpaceX and Virgin Galactic, whose commercial human spaceflight projects planned to break the dominance of state-led programs. Finally, the chapter reviews several international proposals to improve space security during this period, including the European Code of Conduct, the Russo-Chinese-backed Treaty on the Prevention of the Placement of Weapons in Space (PPWT), and the U.N. Debris Mitigation Guidelines.

This chapter examines space security developments from 2009 to 2018. The chapter first discusses President Obama's 2010 U.S. National Space Policy and the 2011 U.S. National Security Space Strategy, which focused attention on "responsible behavior" in space and expanded cooperation with allies and the commercial sector. But China's decision to continue anti-satellite weapons testing and Russian President Putin's reconstitution of his country's military space constellations and counterspace weapons programs created new tensions. The chapter tracks the failure of International Code of Conduct at the United Nations, as well as the progress of talks on Long-Term Sustainability of Space Activities in Vienna. It then examines how emerging commercial space actors began to promote stability and transparency in space by offering unprecedented services in space situational awareness and traffic management. Finally, the chapter discusses President Trump's space security policy and his proposal for a U.S. Space Force.

The concluding chapter returns to the four schools of thought on space trends laid out in Chapter 1—space nationalism, global institutionalism, technological determinism, and social interactionism. The chapter first reviews the "lessons" of the first sixty years of space security and then analyzes some key emerging challenges: space traffic control, space situational awareness, and crowding of the radio frequency spectrum and the geostationary orbital belt. The chapter then projects the arguments of each school into the future, while looking at such challenges as lunar governance, space mining, and weaponization. Finally, it examines the growing role of the commercial space sector and its interests in stability, the rule of law, and peaceful space operations. It concludes by refocusing attention on the need to maintain a safe space environment, if humankind is going to be able to continue to develop the orbital realm.