STANFORD
UNIVERSITY PRESS
Here, There, and Elsewhere
The Making of Immigrant Identities in a Globalized World
Tahseen Shams 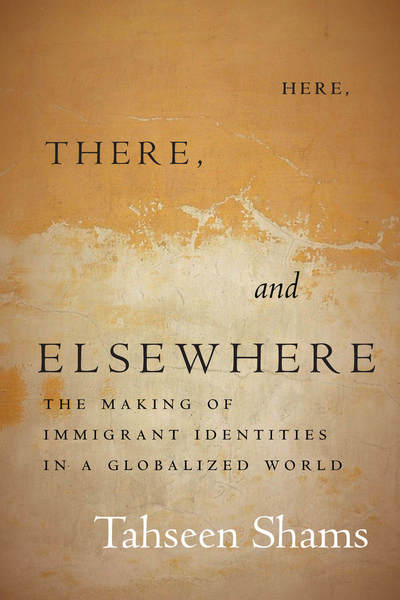 Here, There, and Elsewhere
The Making of Immigrant Identities in a Globalized World
Tahseen Shams

This chapter introduces a new concept for thinking about the places that are neither the immigrants' homeland nor hostland, but which are nonetheless salient in their identity-making processes. Extending the foundational frameworks of international migration that focus exclusively on the dynamics within or between the sending and receiving countries, this chapter provides an overview of the book's key argument—that contrary to dyadic explanations, how immigrants self-identify and how they are identified by others are shaped by geopolitics unfolding in the homeland, hostland, and "elsewhere." The chapter also outlines the book's methodological justifications and sources of data, namely ethnographic observations, interviews, and social media data of sixty South Asian Muslim Americans in California.

2 Beyond Here and There: The Multicentered Relational Framework
chapter abstract

"Elsewhere" does not mean everywhere. Using examples from both contemporary politics and immigration history, this chapter uses a new analytical model—the multicentered relational framework—to show how a faraway foreign place gains salience for an immigrant group and becomes an "elsewhere." Serving as the theoretical spine of the book, this chapter outlines the variations of "elsewhere" and its limitations. The chapter next expounds the three facets of the multicentered relational framework—namely, homeland-hostland, hostland-"elsewhere," and "elsewhere"-homeland—to show how each reveals different dimensions of immigrants' collective identity formation.

This chapter shows how immigrants' homeland ties gain global dimensions based on hostland-"elsewhere" interactions. Using examples of Bangladeshi, Pakistani, and Indian immigrants' homeland politics, it shows that the struggles for nation-building in the sending countries are not insulated within just those societies but are instead shaped by their interactions with "elsewheres," specifically the Middle East and Europe. These struggles are at times mirrored among the immigrant communities in America, while some homeland cleavages lose relevance over time. Yet some other homeland boundaries gain life anew as they take on new, globally informed meanings for the immigrants based on hostland sociopolitics and "elsewhere' dynamics.

4 The Geopolitics of Being "Good Muslims" in America
chapter abstract

This chapter shows how "elsewhere" geopolitics exacerbate social pressures on Muslim and "Muslim-looking" groups in post-9/11 America. Often stereotyped as model minorities based on their race/ethnicity, South Asian Americans, if they are Muslim, are viewed as threats in moments of crisis. Members of this immigrant group often strive to present themselves as "good," "moderate" Muslims and highlighting the universal values they share such as peacefulness. Islamic organizations also highlight the compatibility of Islam with American values by "Islamizing" aspects of American culture on the one hand, and "Americanizing" tenets of Islam on the other. The strategies of individuals can inadvertently lead to political silence, whereas organizational strategies can involve Muslims in U.S. politics, advocating for their interests here and "elsewhere."

5 "Muslims in Danger" Both Here and Elsewhere
chapter abstract

This chapter traces how and why "elsewhere" gains salience in immigrants' self-identification, at times more than their homelands. Many South Asian Muslim immigrants interpret their collective position in America using examples of "elsewheres" where Muslims are also a stigmatized minority. These "elsewhere" examples combined with the homeland's colonized past, the post-9/11 U.S. context, and ongoing tensions between the hostland United States and the Middle East reinforce the immigrants' worldview that "the West" is biased against "the Muslim world." This perspective leads them to participate politically in ways they believe will favorably impact not only the condition of Muslims in America but also anticolonial efforts of Muslims in the Middle East. These examples of "elsewhere" orientations demonstrate immigrants' long-distance nationalism and political transnationalism.

Based on analysis of public and participant reactions to six ISIS attacks—two in Europe (Paris and Brussels), two in the Middle East (Beirut and Istanbul), and two in the United States (San Bernardino, California, and Orlando, Florida)—this chapter shows that conflicts in "elsewhere" Europe influence host country perceptions of South Asian Muslims more than the conflicts in the Middle East do. The Islamist attacks in Europe and in the U.S. generated comparable levels of response. Muslims' fear of backlash and the precautions they took for their safety were comparable in each case. Conversely, Islamist attacks in the Middle East generated low levels of reaction, even from Muslims who self-identified with that region. This incongruity is influenced by the media, geopolitics, global discourse on Muslims, and the prevailing public imaginary of the West and the Muslim world.

7 Here, There, and Elsewhere
chapter abstract

This book presents several questions for migration and race scholars. Does "elsewhere" influence black Muslim identities, or is it an immigrant phenomenon? Are "elsewhere" effects present for predominantly non-Muslim but racialized "Muslim-looking" groups, like Latino/a? With South Asian Muslim Americans responding to Muslim-related contexts in the Middle East, are places in South Asia with Muslim majorities then "elsewheres" for Arab and Middle Eastern Americans? If not, why? How can the multicentered relational framework be used to analyze immigrant identities outside the U.S. context? This concluding chapter reflects on possible answers to these questions and on the political developments unfolding globally.