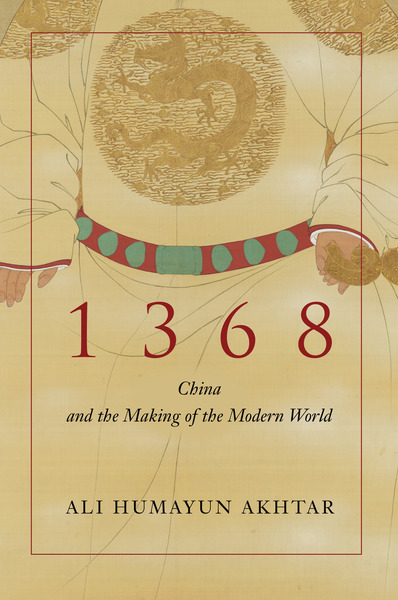 When did China lose its innovative edge to powers like the United Kingdom and the United States? What is China’s future in the global manufacturing landscape that it now dominates? As China expands its economic place in the world, will the West pursue a new path to high-tech industrialization, or alternatively will it continue on the road of globalization and labor outsourcing adopted in the 1970s? Navigating these questions requires an understanding of how the twentieth-century world of globalization came into being. It requires understanding how western Europe first came to dominate an Asian economic landscape once oriented around China, Japan, and Southeast Asia. This book tells the story of China’s first modern global age, placing special emphasis on encounters between Beijing and the West since the Age of Exploration. From the start of the Great Ming dynasty in 1368 to the end of the Qing in 1912, the making of modern China is also the story of the making of the modern world. In its origins, it is the story of how western European shipping came to bypass the once dominant Italian and Middle Eastern markets of the medieval world. By the end of the two Opium Wars (ca. 1839–1842, 1856–1860), western Europe’s “Age of Discoveries” in search of the so-called Far East trade transformed a once global China into something very different. In the words of Napoleon, China had become a “sleeping lion” across the seas and oceans where Ming treasure ships once sailed.

In some ways, even before China’s encounters with Europe’s global shipping networks during the Age of Exploration, China was always a global power. Xian, home of the legendary Terracotta Army and one of the region’s earliest mosques, was a key node along the ancient silk routes. But there was a global turn that took place with the arrival of European powers in the South China Sea, a turn that had its roots decades earlier. In the early 1400s, in the first years of the Ming’s establishment, Beijing made its own turn to the open seas. On the eve of Portugal and Spain’s arrival in Melaka and Manila, Beijing cultivated an unprecedented degree of political and cultural proximity with the maritime states of the South China Sea and Indian Ocean. Between 1405 and 1433, a century before Magellan charted the first trans-Pacific shipping routes from Acapulco to Manila, the Ming commissioned a series of diplomatic missions that set sail for all of the geographies where Spain and Portugal looked for profits after 1492: Japan, Thailand, the Malay peninsula, the Indian subcontinent, Iran, East Africa, and the Arabian gateways of the Mediterranean. Intent on projecting Beijing’s naval and manufacturing power around the world, the Ming’s convoy of treasure ships traversed the Indian Ocean and South China Sea with cargoes of commodities that eventually dominated western European trade portfolios: porcelain, precious metals, embroidered textiles, tea, and other rare items produced in China and neighboring states.

Led by Muslim admiral Zheng He of Yunnan, China’s own age of exploration—a maritime diplomatic overture—accelerated the movement not only of Chinese material culture around the world but also Chinese political and social networks. This transfer occurred especially throughout Southeast Asia, where western European powers a century later would begin building the commercial portfolios and design expertise that would eventually drive European industrialization. In the interim centuries, from the 1500s through the 1800s, the lore of Chinese and Southeast Asian port cities took on new and unprecedented dimensions. In the earlier part of this history, following the arrival of Iberian vessels in Manila and Macau, Jesuit linguists trained as go-betweens for diplomacy in China and Japan. By the end of the sixteenth century, Portuguese and Spanish business networks fully bypassed Italian and Middle Eastern middlemen for access to the region, but they were on the verge of being eclipsed themselves by two newcomers: the Dutch and the British. With the support of the rising Dutch Republic and British monarchy, the Dutch and British East India Companies followed their Iberian neighbors to the South China Sea in the 1600s. They negotiated settlement agreements in selected Asian centers and outright conquered others, all while maintaining a degree of distance from China’s own military might. Change was afoot, however, with the onset of technological advances in western Europe that included the development of industrial machinery and the steam engine. And by the 1800s, as British mass production and weapons manufacturing reached an unprecedented degree of sophistication, the tables had turned. China was on the verge of eclipse.

The rise of the British Industrial Revolution and the end of the Opium Wars in the mid-1800s saw a once powerful China pass into the world’s geopolitical periphery. Beijing’s political and territorial losses on the mainland, together with Commodore Perry’s arrival in Edo in 1853, signaled a seismic shift in China’s political and cultural currency that had a tremendous impact on the region. Under the leadership of samurai-turned-politicians, Japan took the lead in embarking on an unprecedented high-tech industrial transformation that turned away from Chinese political models and coopted British and American advances. China’s own transformation, built on Tokyo’s Anglo-Japanese model, was a slower affair. With roots in the final decades of the Qing era, and following a series of halting advances that carried through the tumultuous twentieth century, the industrial transformation of China finally occurred after the economic reforms of the late 1970s and the transfer of technological know-how from Japan and the West to China’s new manufacturing centers: Tianjin, Qingdao, Ningbo, Shenzhen, and others. Since the 2000s, on the heels of China’s acceptance into the World Trade Organization with the then president of the United States’ enthusiastic support, debates about China as a post-Soviet “superpower” have been in full bloom.

From the perspective of the story told in this book, in sum, China’s rapid emergence as a high-tech commercial player is the second iteration of its place as an international manufacturing power since the onset of global maritime navigation. The international renown associated with tech hubs like Shenzhen and Shanghai today evokes Europe’s earlier fascination with Chinese commodities manufactured in porcelain-producing Jingdezhen and tea-exporting Quanzhou. What makes this new iteration significant is how it continues to be overlooked by many economists, politicians, and historians. In the same way many economic historians place China on the periphery of a more British-centered picture of world history since the Age of Exploration, politicians frequently underestimate the extent that China’s industrialization since the 1970s points to its emergence as a new economic and military superpower in Asia. What the long-duration history told in this book illustrates is that with the European Union’s rising economic crises, China in many ways already is a superpower, and the tensions between international development institutions like the World Bank and the One Belt One Road initiative illustrate that emerging markets have yet to determine how exactly they navigate their own place in this shifting landscape. With the goal of understanding this changing geopolitical landscape and its long-duration origins, this book offers a new picture of China’s global encounters since the Great Ming and the making of the modern world.