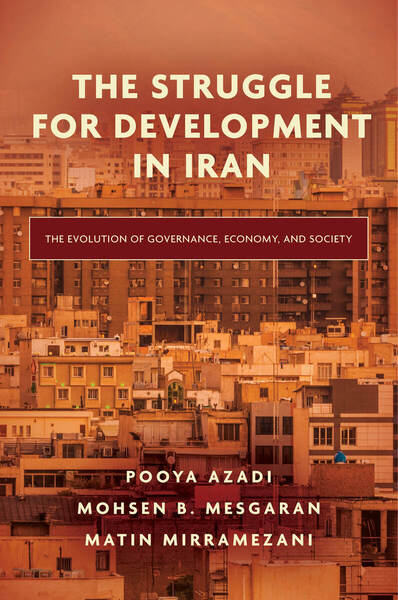 AT THE TIME OF THIS writing in 2021, Iran is facing a major crisis which, in terms of depth and scope, is unprecedented even by the Islamic Republic’s own standards. The economy is spiraling downward, social crises are omnipresent, political and petty corruption are spreading like wildfire, political institutions are in decay and unable to function properly, and the legitimacy of the regime in the eyes of Iranians as well as the international community is at its lowest point in history. For decades, the Islamic Republic has responded to the challenges facing the country and the demands for change with irresponsible policies and brutal repression, which—although sometimes successfully eliminating the symptoms—have never properly addressed the underlying problems. As a result of this approach, as will be discussed in this book, the past few decades in Iran have been a period of sluggish and noninclusive economic growth, ill-fated social engineering with an Islamic template, political repression, and extensive environmental degradation. The compounding effects of these structural crises have brought Iran to the verge of a historic crossroad. While the continuation of business as usual will inevitably lead to a dire future, nothing is yet predetermined as the current crisis may in fact unite large segments of society to take collective action to bring about a positive paradigm shift. After all, difficult decisions and painful changes are often facilitated by deep crises, and in that spirit, the current crisis facing Iran need not beget a catastrophe and can in fact give rise to substantive changes in a desirable direction.

The literature on Iran over the past few decades has mostly focused on its ideological and political landscape, and geopolitical issues, sometimes with an obsession for the role of imperialism, while largely overlooking the role of the fundamental forces of the economy and social undercurrents that shape the development of the country. The aim of this book is to help fill this gap by presenting a multidimensional and critical analysis of Iran’s path of development over its troubled history of the past half century. The book has an ambitious scope—to cover a wide array of subjects including governance, political economy, macroeconomy, demography, education, energy, food, and the environment. The content of the book is organized such that it helps readers gain a better understanding of the complex interactions among different dimensions of development.

Our analysis framework to decipher complex issues discussed in this book is based on a bottom-up approach where granular-level data are collected and analyzed to depict a more holistic picture with important policy implications. The data used throughout this manuscript were meticulously collected from hundreds of sources over several years. The data contain official statistics reported by national and international organizations and the authors’ own estimates and calculations based on data extraction from online resources, which in some cases required applying innovative data-mining techniques.

The chapters of this book are organized as follows. In chapter 1, we discuss the evolution of Iran’s political institutions and explain how they interacted with the economy in Iran’s rapidly changing society. To this end, we focus on the evolution of three sets of political institutions, namely state, rule of law, and democratic accountability during four distinct periods: prerevolution (1970–1978), the early stage of the revolutionary state (1979–1988), reconstruction and reforms (1989–2004), and the period of governance deadlock and political decay (2005–2020). Chapter 2 provides an in-depth account of Iran’s demographic dynamics by analyzing trends in population growth, fertility, marriage, age structure, life expectancy, urbanization, and population geographical distribution. Chapter 3 presents major trends in the labor market and human capital formation. In the first part, we describe the developments in Iran’s labor force with a focus on the employment ratio in order to present the combined effects of unemployment and economic participation. We then discuss trends in Iran’s labor productivity and wages. We also put the issue of the gender gap in Iran’s labor market—which has remained unresolved despite the closure of the educational gap a long time ago—into a broader context using data from other countries. In the second part of chapter 3, we discuss Iran’s progress and shortcomings in its century-long quest to improve literacy and human capital. The analysis covers both quantitative and qualitative aspects of human capital formation and their impacts on economic performance.

Chapter 4 provides an overview of the main trends in the economy using the same periods outlined in chapter 1. To delineate the overall economic performance of each period, we explore several important economic indicators such as real GDP growth, sectoral contributions, employment, inflation, trade, and capital formation. The last part of this chapter evaluates some of Iran’s formidable economic challenges—namely, rising public debt, low tax extraction capacity, insufficient investments, imbalances in the financial sector, and water scarcity. We conclude this chapter by discussing the compounding effects of the above issues on the future trajectory of the economy.

In the next chapters of the book, we delve into several more specific but hugely consequential topics. Chapter 5 provides an account of developments in the financial sector with a focus on the performance of the banking system. It begins by evaluating the outcomes of Iran’s Central Bank’s monetary policy and the underlying institutional causes for its poor performance in controlling inflation. We then discuss trends in Iran’s financial depth and the amount and distribution of credits allocated to different sectors. We end the chapter with a discussion on the challenges of the banking system using indicators that measure the soundness of the financial sector as a system. Chapter 6 provides an overview of Iran’s energy landscape, starting with the trends in oil and gas production, domestic consumption, and exports. We also evaluate the historical role that oil revenue has played in financing public expenditures and discuss its future potential in light of the shifting paradigm of the global oil markets from scarcity to abundance. We will then explain how Iran’s sheer volume of produced natural gas is allocated to different uses and discuss the inefficiencies associated with its misallocations. Finally, we will delineate trends in demand and supply sides of the electricity market and analyze Iran’s controversial nuclear program from an economic standpoint. Chapter 7 is concerned with Iran’s water crisis which is one of the most consequential issues that current and future generations of Iranians must deal with. This chapter begins with historical trends in Iran’s domestic food supply focusing on agricultural water consumption, cultivated area, patterns of irrigation, and the amount and composition of agricultural output. We then show how historical demand for food has been affected by changes in population and the per capita income. The chapter ends with an analysis of future food demand and the increasing need for the import of foodstuff warranted by the need to reduce water consumption.

Chapter 8 takes a close look at the issue of migration and brain drain from Iran. The first part of the chapter presents new sets of data compiled from various sources to shed light on how the number of Iranian emigrants, international students, scholars, and asylum seekers have changed over the past half century. We then explain the drivers of migration and discuss the obstacles that prevented Iran’s highly successful diaspora from taking part in the development of their homeland.

Chapter 9 provides a critical analysis of the Islamic Republic’s claim of miraculous achievements in the realm of science and technology. This claim plays a central role in the regime’s broader propaganda to create the impression that under its jihadi-style approach to development, Iran has joined the club of the most technologically advanced countries of the world. We, however, argue that the drastic increase in the quantity of Iran’s scientific publications stem from the state’s productionist research policies which consider publication as an end in itself with no implications for technological advancement and the economic well-being of the nation. In fact, this publication bubble can be regarded as a perfect manifestation of what some development scholars call isomorphic mimicry, that is, when policymakers in a developing country adopt the outward appearance of a successful process from advanced countries while hiding or overlooking the lack of its real function.

The final chapter of this book discusses the trajectory of development in Iran based on insights and data presented throughout the rest of the book under three different scenarios of business as usual, reforms within the Islamic Republic, and a more optimistic paradigm triggered initially by transformation of political institutions to improve the rule of law and democratic accountability as an entry point to future development.