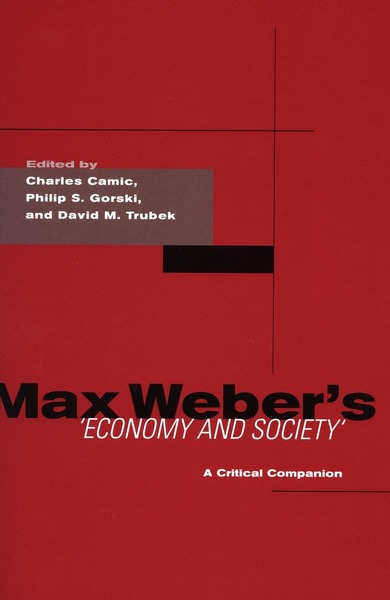 Charles Camic is Martindale-Bascom Professor of Sociology in the Department of Sociology and in the Science, Technology, and Society Program at the University of Wisconsin—Madison.  From 1999 to 2003, he was co-editor of the American Sociological Review.  He has published widely on the development of American sociological thought between 1890 and 1940.

Randall Collins is professor of sociology at the University of Pennsylvania.  His most recent books include The Sociology of Philosophies (1998) and Interaction Ritual Chains (2004).

Mustafa Emirbayer teaches sociology at the University of Wisconsin—Madison.  He has written extensively on topics in both classical and contemporary social theory, including culture and social networks, relational analysis, agency and action theory, Durkheim and historical sociology, and pragmatism.

Harvey Goldman is professor and chair, Department of Sociology, and adjunct professor, Department of Political Science, at the University of California, San Diego.  He is the author of two books on Max Weber and Thomas Mann, and has also published articles on ancient philosophy, contemporary French intellectuals, and problems of reflexivity, all in the area of sociology of knowledge and intellectuals.

Philip S. Gorski is professor of sociology at Yale University.  He is the author of The Disciplinary Revolution: Calvinism and the Rise of the State in Early Modern Europe (2003).

Hans Joas is director of the Max Weber Center for Advanced Cultural and Social Studies, Erfurt, Germany, and professor of sociology and social thought at the University of Chicago.  Among his publications are G.H. Mead: A Contemporary Re-examination of His Thought (1987/1997); Social Action and Human Nature (with Axel Honneth) (1998); Pragmatism and Social Theory (1993); The Creativity of Action (1996); The Genesis of Values (2000); and War and Modernity (2003).

Duncan Kennedy is the Carter Professor of General Jurisprudence at Harvard Law School.  He teaches torts housing law, law and development, and legal theory.  He has written extensively on the history of Western legal thought.  His most recent book is A Critique of Adjudication (1997).

Hans G. Kippenberg, chair for Theory and History of Religions at the University of Bremen, Germany, from 1989 to 2004, is a fellow of the Max-Weber-Kolleg, Erfurt, Germany.  He is the author of Discovering Religious History in the Modern Age (2002).  He was in charge of the section "Religion" for the new critical German edition of Max Weber's Wirtschaft und Gesellschaft, published under the title Religiöse Gemeinschaften (2001).  Together with Martin Riesebrodt, he edited Webers' "Religionssystematik" (2001).

Donald N. Levine is the Peter B. Ritzma Professor of Sociology at the University of Chicago.  He has been editor of the Heritage of Sociology series since 1988 and was chair of the ASA Theory Section in 1996-97.  His recent publications include Visions of the Sociological Tradition (1995); a revised edition of Great Ethiopia: The Evolution of a Multiethnic Society (2000); and Powers of the Mind: The Reinvention of Liberal Learning (2005).

Wolfgang J. Mommsen was professor of modern and contemporary history at the University of Düsseldorf, Germany.  From 1977 to 1985, he was director of the German Historical Institute in London.  His books include Max Weber and German Politics, 1890-1920 (1959/1974); The Age of Bureaucracy: Perspectives on the Political Sociology of Max Weber (1974); and Max Weber and His Contemporaries (edited with Jurgen Osterhammel) (1987).  He died in August of 2004.

Guenther Roth has published on Max Weber's oeuvre and impact for forty-five years.  His publications range from The Social Democrats in Imperial Germany: A Study in Working-Class Isolation and National Integration (1963) to Max Weber's Anglo-German Family History 1800-1950 (2001).  He edited, with Claus Wittich, Max Weber's Economy and Society (1968/1978), and, with Hartmut Lehmann, Weber's "Protestant Ethic": Origins, Evidence, Contexts (1993).  He retired from Columbia University in 1997.

Richard Swedberg is professor of sociology at Cornell University.  His work is primarily in the field of economic sociology.  He is the author of Max Weber and the Idea of Economic Sociology (1998) and the Max Weber Dictionary (2005).

Regina Titunik is associate professor of political science at the University of Hawaii at Hilo.  She has written several articles on Max Weber's political thought and made use of Weberian concepts in writings on gender integration in the military.

David M. Trubek is Voss-Bascom Professor of Law and senior fellow of the University of Wisconsin's Center for World Affairs and the Global Economy.  He has served as a trustee of the Law and Society Association and of the Research Committee on the Sociology of Law of the International Sociological Association.  He has published on such subjects as Max Weber's sociology of law, the role of law in development, the social role of the legal profession, human rights, European integration, the governance of work and welfare in a new economy, civil litigation, social theory critical legal studies, and new approaches to governance and the emergence of "post-regulatory" law.

Erik Olin Wright is Vilas Distinguished Professor of Sociology at the University of Wisconsin.  His academic work has been centrally concerned with reconstructing the Marxist tradition of social theory and research in ways that attempt to make it more relevant to contemporary concerns and more cogent as a scientific framework of analysis.  His recent books include Interrogating Inequality (1994); Class Counts: Comparative Studies in Class Analysis (1997); and Deepening Democracy: Institutional Innovations in Empowered Participatory Governance (with Archon Fung) (2003).