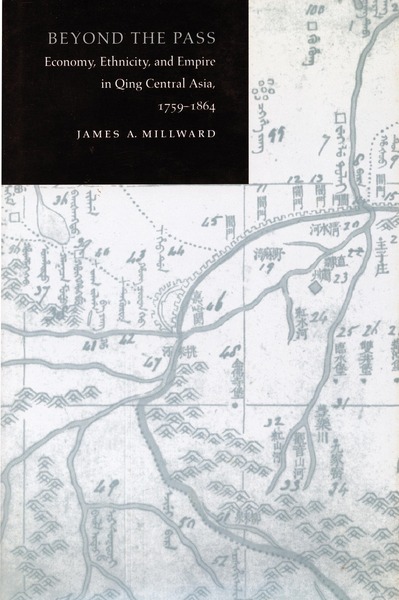 Beyond the Pass
Economy, Ethnicity, and Empire in Qing Central Asia, 1759-1864
James A. Millward

As analysis of the revenue available to Qing garrisons in Xinjiang reveals, imperial control over the region in the eighteenth and nineteenth centuries depended upon sizeable yearly subsidies from China. In an effort to satisfy criticism of their expansion into Xinjiang and make the territory pay for itself, the Qing court permitted local authorities great latitude in fiscal matters and encouraged the presence of Han and Chinese Muslim merchants. At the same time, the court recognized the potential for unrest posed by Chinese mercantile penetration of this Muslim, Turkic-speaking area. They consequently attempted, through administrative and legal means, to defend the native Uyghur population against economic depredation. This ethnic policy reflected a conception of the realm that was not Sinocentric, but rather placed the Uyghur on a par with Han Chinese.

Both this ethnic policy and Xinjiang’s place in the realm shifted following a series of invasions from western Turkestan starting in the 1820’s. Because of the economic importance of Chinese merchants and the efficacy of merchant militia in Xinjiang, the Qing court revised its policies in their favor, for the first time allowing permanent Han settlement in the area. At the same time, the court began to advocate provincehood and the Sinicization of Xinjiang as a resolution to the perennial security problem. These shifts, the author argues, marked the beginning of a reconception of China to include Inner Asian lands and peoples—a notion that would, by the twentieth century, become a deeply held tenet of Chinese nationalism.

James Millward is Assistant Professor of History at Georgetown University. This is a much-revised version of his 1993 Stanford doctoral dissertation. He has previously published two articles in scholarly journals and a chapter in our recent multi-author work Remapping China.