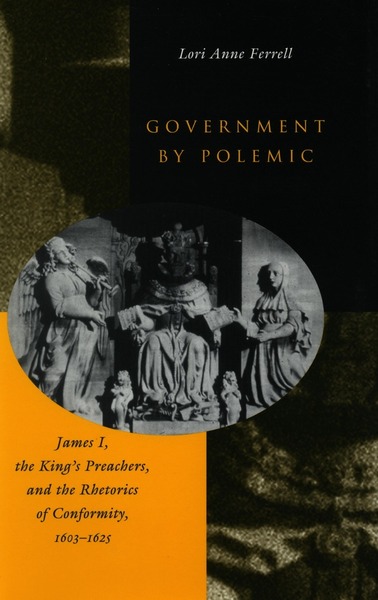 Government by Polemic
James I, the King’s Preachers, and the Rhetorics of Conformity, 1603-1625
Lori Anne Ferrell

This book is a study of the Anglican Church in the Jacobean period, a time of central importance in English religious and political history. By looking at official words instead of official deeds, the author challenges the recent revisionist position, made by both Anglican apologists and historians, that the reign of James I was an era of religious consensus and political moderation. Analyzing sermons preached and then ordered into print by the king, the book demonstrates that the Jacobean claim to "moderation" and the pursuit of a so-called via media were rhetorical strategies aimed at isolating Elizabethan-style Calvinist reformers and alienating their supporters.

Utilizing sources drawn from history, literature, and religion, this interdisciplinary work combines rhetorical and historical analysis in discussing the major religious and political issues of the period: the union with Scotland, the Gunpowder Plot, the Oath of Allegiance controversy, and the forceful elaboration of anti-Puritanism and ceremonialism in the Church of England. Throughout, the author presents evidence for her claim that the discourse of government is the substance of government.

"This is an important study in two respects. First, it completes the overthrow of what has been the dominant interpretation of early Stuart ecclesiastical politics. At the same time, it is an exemplary study of the way discursive strategies should be related historically to the politics of the time."

". . . . [Represents] an important step forward in our understanding of Jacobean politics and religion."