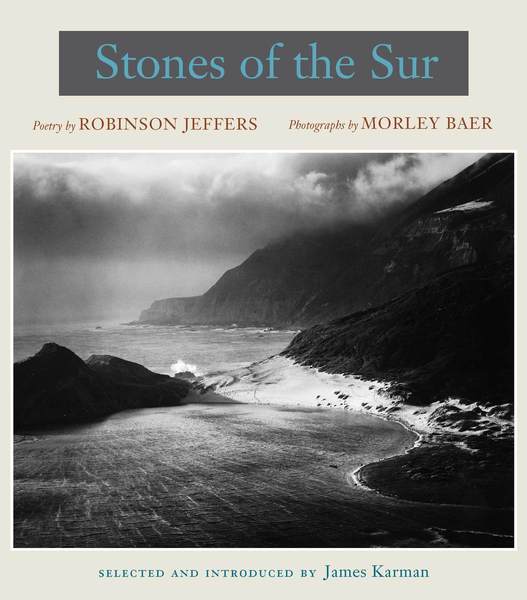 Stones of the Sur
Poetry by Robinson Jeffers, Photographs by Morley Baer
Selected and Introduced by James Karman

The precipitous cliffs, rolling headlands, and rocky inlets of the Big Sur coast of California were alive for Robinson Jeffers, and throughout his long career as a poet, he extolled their wild beauty. His vivid descriptions inspired the best work of other artists who lived nearby, including such noted photographers as Edward Weston, Ansel Adams, and their younger contemporary Morley Baer.

Before he died in 1995, Baer was planning a volume that would bring together a group of his landscape photographs of the Big Sur area with a selection of poems that expressed Jeffers's mystical experience of stone. Jeffers believed that stone is alive, perhaps even conscious in some way. Baer wanted to create a visual and literary meditation on the life-experience of stone. James Karman was invited by Baer to serve as his collaborator, and has brought the project to completion—more than 50 of Baer's photographs paired with poems by Jeffers (some complete, others excerpted).

Stones of the Sur is in five parts, each of which takes its title from a poem. Part I, "Tor House," contains photographs and poems about Jeffers's home, ever the locus of his inspiration. Part II, "Continent's End," begins with a panoramic view of the coastline and is followed by visual and textual images that become progressively narrower in scope as Baer and Jeffers focus on the mountains, cliffs, beaches, boulders, rocks, and pebbles of the Big Sur.

The inward progression continues in Part III, "Oh Lovely Rock," where Baer trains his lens on close surfaces—revealing his sensibilities at their most abstract. From the middle of Part III on, the spiral is reversed and the view begins to open. Part IV, "Credo," expands outwardly from the pebbles and rocks of the Big Sur back to the beaches, cliffs, and mountains. Part V, "The Old Stone-Mason," concludes the book with a return to Tor House.

In addition to his own many books, Morley Baer contributed to a publication sponsored by the Sierra Club and guided by Ansel Adams: Not Man Apart, which combined lines from Jeffers's poetry with photographs of the Big Sur coast by Adams, Weston, Eliot Porter, and others. James Karman is Professor of English and Coordinator of the Humanities Program at California State University, Chico. He is the author of Robinson Jeffers: Poet of California and the editor of Critical Essays on Robinson Jeffers and Of Una Jeffers.

"An elegant coda to the remarkable series, with more than 50 stunning photographs."

"A master in his field. . . . [Baer's work] has the aura of excellence and his craft is above reproach."

"This book combines poetry by Jeffers with California landscape photographs by Morley Baer. . . . This is a work of unusual sensitivity that blends two media with personal expressions of two artists of unique stature. Highly recommended. General readers; lower-division undergraduates through professionals."

"This extraordinary edition pairs Jeffers's poetry with fifty-two photographs by the poet's friend and neighbor, renowned photographer Morley Baer. . . . The photos stand on their own great merit as does the poetry. Together they create this sensitive, thundering, yet spiritual work."

—The Book Club of California

"Stones of the Sur is the culmination of Baer's last wish for a book project. Karman, his chosen collaborator, has fulfilled that ambition beautifully."