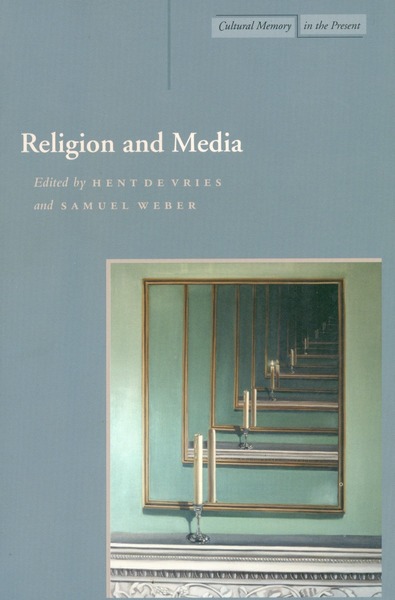 The latter part of the twentieth century saw an explosion of new media that effected profound changes in human categories of communication. At the same time, a "return to religion" occurred on a global scale. The twenty-five contributors to this volume—who include such influential thinkers as Jacques Derrida, Jean-Luc Nancy, Talal Asad, and James Siegel—confront the conceptual, analytical, and empirical difficulties involved in addressing the complex relationship between religion and media.

The book's introductory section offers a prolegomenon to the multiple problems raised by an interdisciplinary approach to these multifaceted phenomena. The essays in the following part provide exemplary approaches to the historical and systematic background to the study of religion and media, ranging from the biblical prohibition of images and its modern counterparts, through theological discussion of imagery in Ignatius and Luther, to recent investigations into icons and images that "think" in Jean-Luc Marion and Gilles Deleuze. The third part presents case studies by anthropologists and scholars of comparative religion who deal with religion and media in Indonesia, India, Japan, South Africa, Venezuela, Iran, Poland, Turkey, present-day Germany, and Australia.

The book concludes with two remarkable documents: a chapter from Theodor W. Adorno's study of the relationship between religion and media in the context of political agitation (The Psychological Technique of Martin Luther Thomas' Radio Addresses) and a section from Niklas Luhmann's monumental Die Gesellschaft der Gesellschaft (Society as a Social System).

Hent de Vries holds the Chair of Metaphysics and its History in the Department of Philosophy of the Faculty of Humanities at the University of Amsterdam, and is Professor of Modern European Thought in the Humanities Center of the School of Arts and Sciences at The Johns Hopkins University.

"I cannot overestimate the importance of this book, which will become mandatory reading for all courses in media studies, histories of religion, anthropologies of modernity, cosmopolitics, the global order, and new forms of sociality. Reading it has been a source of rare intellectual satisfaction and aesthetic pleasure."

"The collection of essays Religion and Media is an important contribution to a variety of disciplines, including but not limited to philosophy, media studies, sociology, religious studies, anthropology and literary theory. It is huge in scope, theoretically ambitious and is sure to become a stardard work in courses and seminars in media studies, literary theory and comparative religion where the status of the religious is at issue. . . . The volume itself offers a panorama of the most recent developments in the emergent nexus of religious studies, media studies, philosophy and sociology."

"For those who see that research on religion and media is more than merely the intersection of two variables, the work in this book, particularly in the opening chapters, will be quite helpful. . . . In all, the text is a clear contribution to scholarship in a number of fields, and many of the chapters will prove useful in providing theoretical connections and language for more exmpirical study."

—Journal of Media and Religion

"At the end of the day, Religion and Media offers so much of interdisciplinary value that the collection far exceeds the sum of its chapters. These in turn illuminate the horizons of the volume as a whole. In fact, I can't recall ever having underlined an anthology so densely. At the very least the chapters are "good to think" and at best they activate the spirit of critical inquiry abiding at the heart of all the best conversations across disciplinary and philosohical differences."

"Hent de Vries and Samuel Weber's superb collection Religion and Media is one of the most important collections this year in the more amorphous field of religion and culture. De Vries and Weber have gathered together some of the most significant names in critical and cultural theory over the last thirty years or so...to consider the relationship between its two titular terms."

—The Year's Work in Critical and Cultural Theory