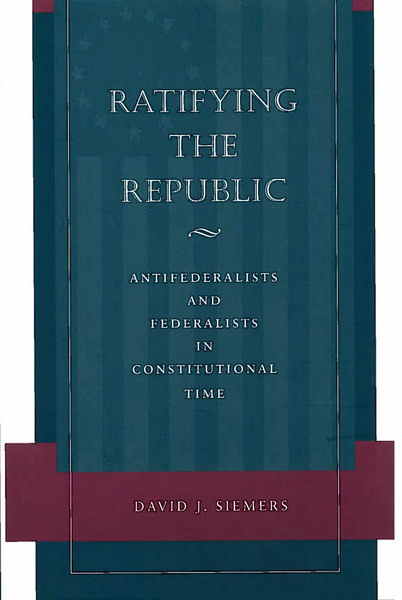 Ratifying the Republic explains how the United States Constitution made the transition from a very divisive proposal to a consensually legitimate framework for governing. This story has never been told in its entirety, mainly because the transition seemed so seamless. But the Federalists' proposal had been bitterly opposed, and constitutional legitimation required a major transformation. The story of that transformation is the substance of this book.

The progression of constitutional contexts triggered new responses from participants in the ratification debate which led to legitimation. Antifederalists had been loath to scrap the Articles of Confederation because of their conservative approach to the rule of law. After ratification, this same conservative predisposition led them to agree to abide by the newly legalized Constitution and instruct their followers to do the same.

Implementation of the Constitution yielded other responses which bolstered the document. For instance, this progression in "constitutional time" exposed incomplete views within the Federalist camp about how a constitution should be treated in practice. James Madison believed the Constitution fairly clearly distinguished federal powers from those retained by the states; successful constitutionalism dictated preserving that division. In contrast, Alexander Hamilton thought that a constitution that split sovereignty between the states and the nation was inherently unstable. His hope was to salvage the Union by extending national power, a project directly contrary to Madison's more static view.

Madison and these Federalists who agreed with him joined with the former Antifederalists to become the Republican party. This alliance held the remaining Federalists to their well-publicized ratification debate argument that the Constitution was a grant of limited, specific powers only. This new alliance had sufficient strength to contemplate taking the reins of government. With majority status a distinct possibility, incentives to replace the new regime were minimized, eclipsed by a state-centric interpretation of the Constitution.

The legislative process adopted by Congress was also satisfactory to the opposition, who were sticklers for proper procedures. Finally, the trying and financially unrewarding nature of service in the new government discouraged the best and the brightest from seeking national office, hindering institutional prestige and the growth of national power, developments which pleased those who favored dual sovereignty. Throughout, the author emphasizes the role fear, contingency, and happenstance played in the success and legitimation of the Constitution.

David J. Siemers is Assistant Professor of Political Science at the University of Wisconsin-Oshkosh.

"Ratifying the Republic is an exquisite study of the politics of founding a viable government, of moving from 'legality to legitimacy.' This meticulously researched study relies on a combination of textual analysis, detailed review of debates and personal papers, and careful examination of roll call votes. Siemers has made a major contribution to our understanding of how our political system was formed and why it perseveres today, no small achievement for a young scholar."

—Charles O. Jones, University of Wisconsin at Madison and The Brookings Institution

"David Siemers's important new book illuminates the complex processes that helped the new Federal Constitution achieve legitimacy so quickly after its adoption. This book also settles the question of what actually happened to Anti-Federalists after ratification. The author makes a compelling case that Anti-Federalism was essential to the creation of a loyal opposition tradition within American political and constitutional life. Ratifying the Republic will become essential reading for any serious student of early American political life."

"David Siemers's Ratifying the Republic is arresting history. Siemers describes the hopes and fears of the Federalists and Anti-Federalists as they struggled to design and shape the Constitution. More important, he describes how these struggles produced a Constitution that no one envisioned when the process began, but that all sides soon found themselves supporting as the best defense against an uncertain future."

"Siemers's volume is filled with interesting historiographical analysis with intriguing charts analyzing congressional votes in the first twelve years of the constitutional government . . . .Siemers has amassed a great deal of information and has made a contribution to our understanding of early party formation."

"Simply put, this is a book that should be read and debated by political scientists, theorists, and historians alike." The Review of Politics

"...Siemer's Ratifying the Republic is well worth reading. It has an energy that is admirable and a willingness to open up old questions from fresh perspectives." 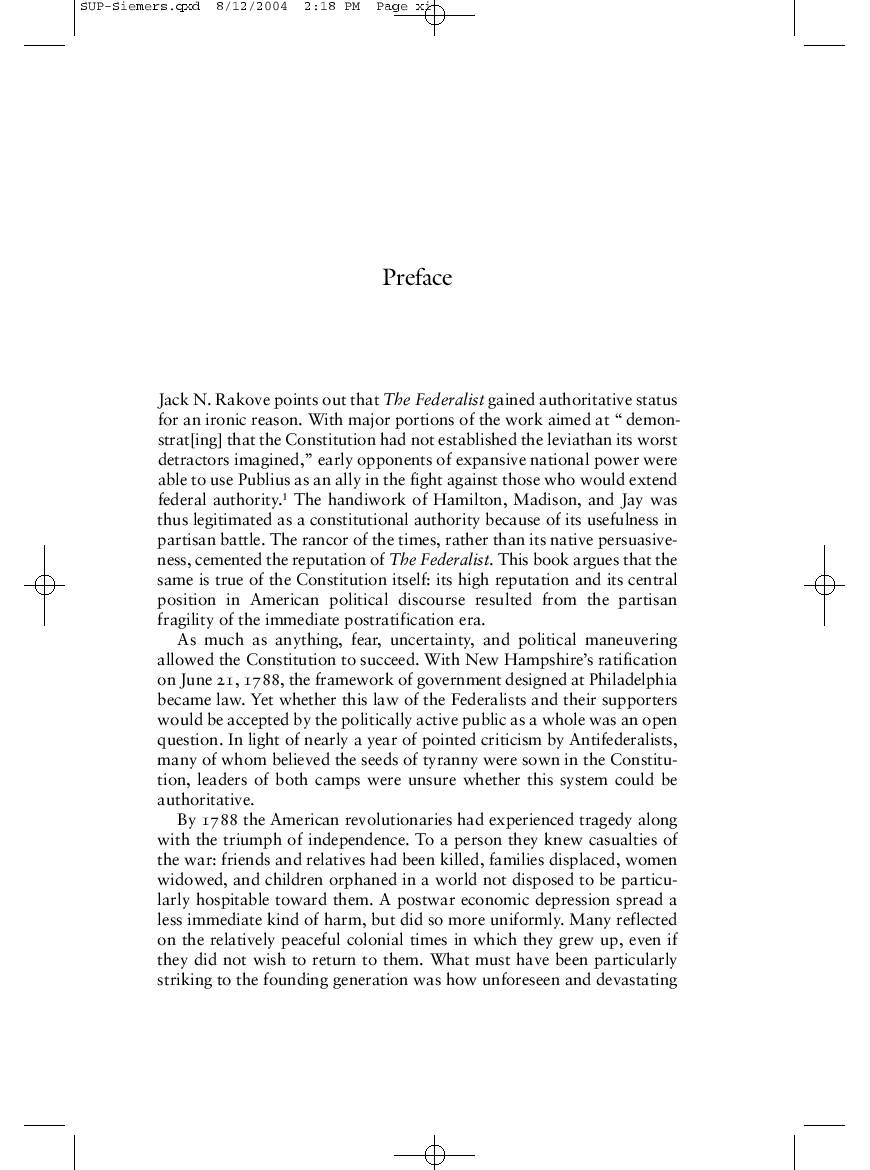 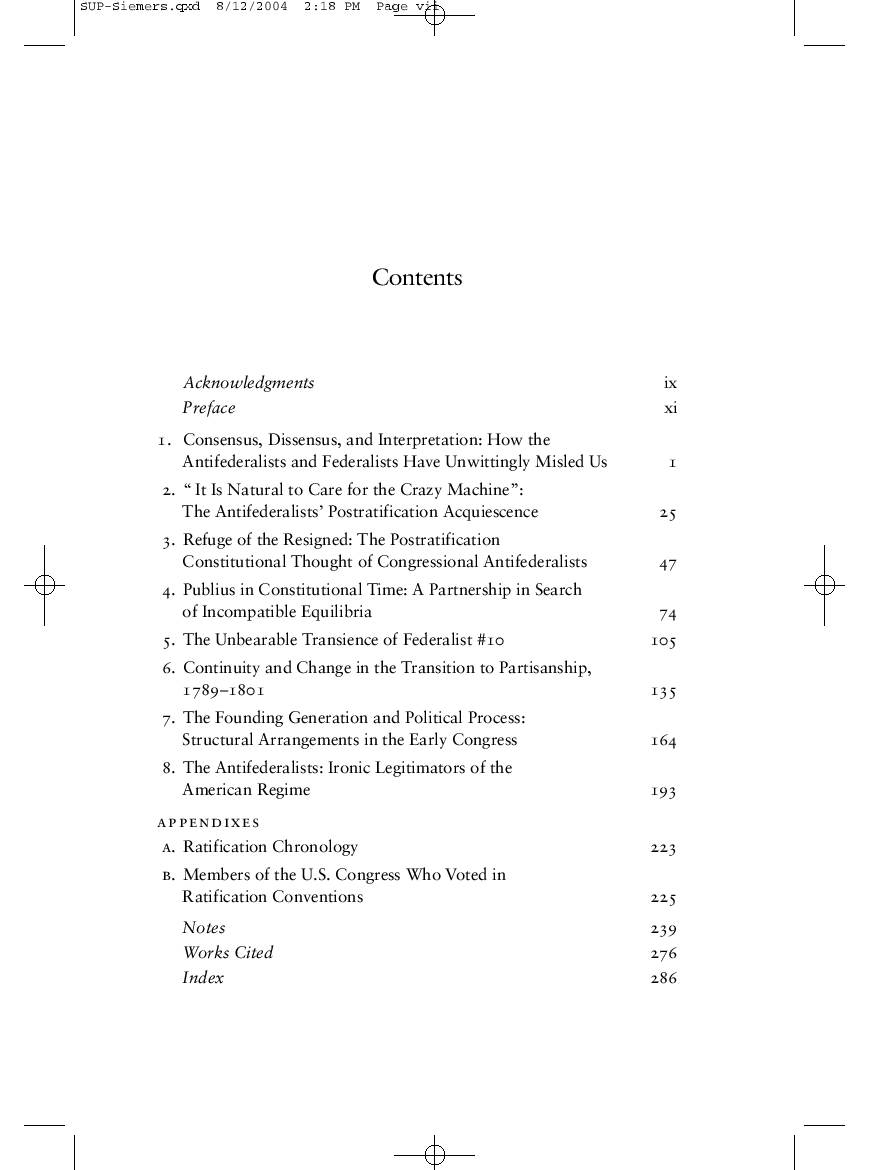