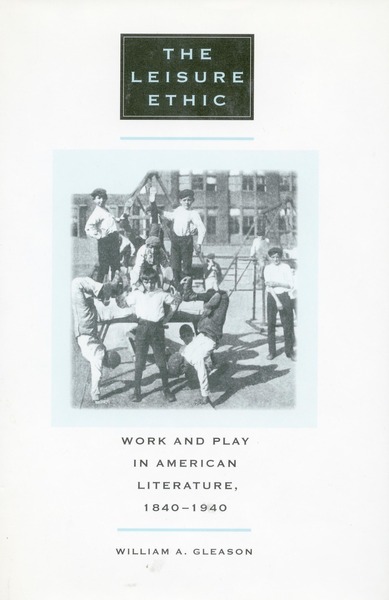 The Leisure Ethic
Work and Play in American Literature, 1840-1940
William A. Gleason

At the turn of the last century, as routinized industrial labor made a mockery of the gospel of work, Americans increasingly sought fulfillment not on the job but in their leisure activities. This book explores the multiple and, at times, contradictory tensions surrounding this turn to play and examines their impact on nineteenth- and early-twentieth-century American literature. Arguing that American writers participated in the ongoing debates over labor and leisure more strenuously than is commonly understood, the author shows how literary narratives both responded to and helped shape the emerging gospel of play.

Richly grounded in social, political, and economic history, this book demonstrates the ways that discussions of leisure engaged the most pressing issues of the age: immigration, women's rights, public health, race relations, mass culture, and perhaps most important, the nature and meaning of work itself. Where turn-of-the-century recreation reformers envisioned play as the revivifying alternative to modern labor's assault on the self, American writers from Henry David Thoreau to Zora Neale Hurston found that vision too deeply indebted to the very system it sought to repair. The fatal flaw of play theory, these writers insisted, was its commitment to an ideology of fair play and teamwork drawn not from the spirit of the playground but from the production- and profit-minded ethos of corporate capitalism.

Broad in scope and method, and structured by a series of original and illuminating pairings of texts and authors—including Thoreau and Mark Twain, Abraham Cahan and Ole Rölvaag, Charlotte Perkins Gilman and Edna Ferber, James Weldon Johnson and F. Scott Fitzgerald, Theodore Dreiser and Richard Wright, and William Faulkner and Hurston—this book offers an important new direction for the study of labor, leisure, and representation.

William A. Gleason is Assistant Professor of English at Princeton University.