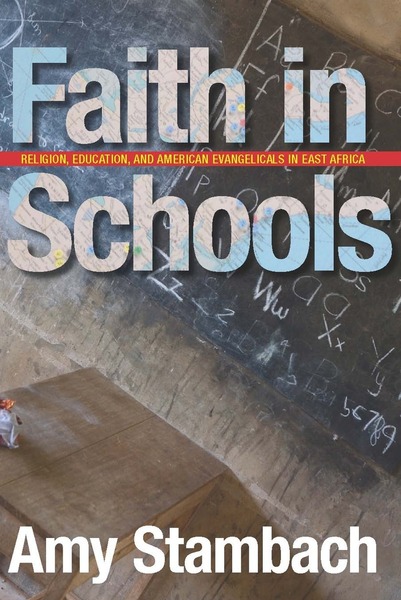 American Evangelicals have long considered Africa a welcoming place for joining faith with social action, but their work overseas is often ambivalently received. Even among East African Christians who share missionaries' religious beliefs, understandings vary over the promises and pitfalls of American Evangelical involvement in public life and schools. In this first-hand account, Amy Stambach examines missionary involvement in East Africa from the perspectives of both Americans and East Africans.

While Evangelicals frame their work in terms of spreading Christianity, critics see it as destroying traditional culture. Challenging assumptions on both sides, this work reveals a complex and ever-evolving exchange between Christian college campuses in the U.S., where missionaries train, and schools in Kenya, Uganda, and Tanzania. Providing real insight into the lives of school children in East Africa, this book charts a new course for understanding the goals on both sides and the global connections forged in the name of faith.

Amy Stambach is Director of Global Studies and Professor of Educational Policy Studies and Anthropology at the University of Wisconsin-Madison. She is the author of Lessons from Mount Kilimanjaro: Schooling, Community, and Gender in East Africa (2000).

"Each section flows seamlessly into the next in capturing the movement of people, ideas, and cultural values across the two continents . . . Stambach's rigorous field research informed by her keen anthropological and ethnographical perspectives and longstanding cultural experience in the region are richly rewarding to read."

"Stambach's ethnographic examination of missionary practices takes a radical focus that is, in itself, innovative enough to make the text an important read. Her data collection moves, and moves us as readers, through space and across borders and boundaries. . . Stambach has identified a novel locus for the analysis of Christianity and education—young American missionaries, their U.S.-based training, and their service in three east African countries. The text will be of certain interest to fellow anthropologists, particularly those of us working in the field in Africa, as well as the very missiologists who draw on anthropological concepts in the training of their young colleagues."

"As case study writing, the book is exemplary . . . Stambach's careful research and responsible interpretation show on every page."

"Amy Stambach relates a fascinating story of nondenominational Christian evangelism unfolding in four countries on two continents while simultaneously embedding it within the conceptual literature of classical and contemporary anthropology . . . Stambach provides rich description and cultural insight from a sophisticated anthropological perspective and a career of fieldwork in East Africa."

"Stambach employs a delicate and even-handed touch as she probes the missionaries' intentions, means, and outcomes, as well as the needs and responses of local communities in Africa."

"Stambach's superb insights into faith-based efforts across East Africa demonstrate the complex interconnectedness of religion and education. On a highly fluid, truly transnational terrain, new visions of sociality and civics are taking shape. There is simply nothing like this in the library of works on missionization in Africa."

—Brad Weiss, The College of William and Mary

"Faith in Schools reveals how 'teaching without preaching,' a condition of participating in public schooling in East Africa, is actually serving the changing religious ends of Evangelicals. The complexity of development work in East Africa, and America's role in ushering in this work, are highlighted in this truly global look at the drama of universal human salvation today." 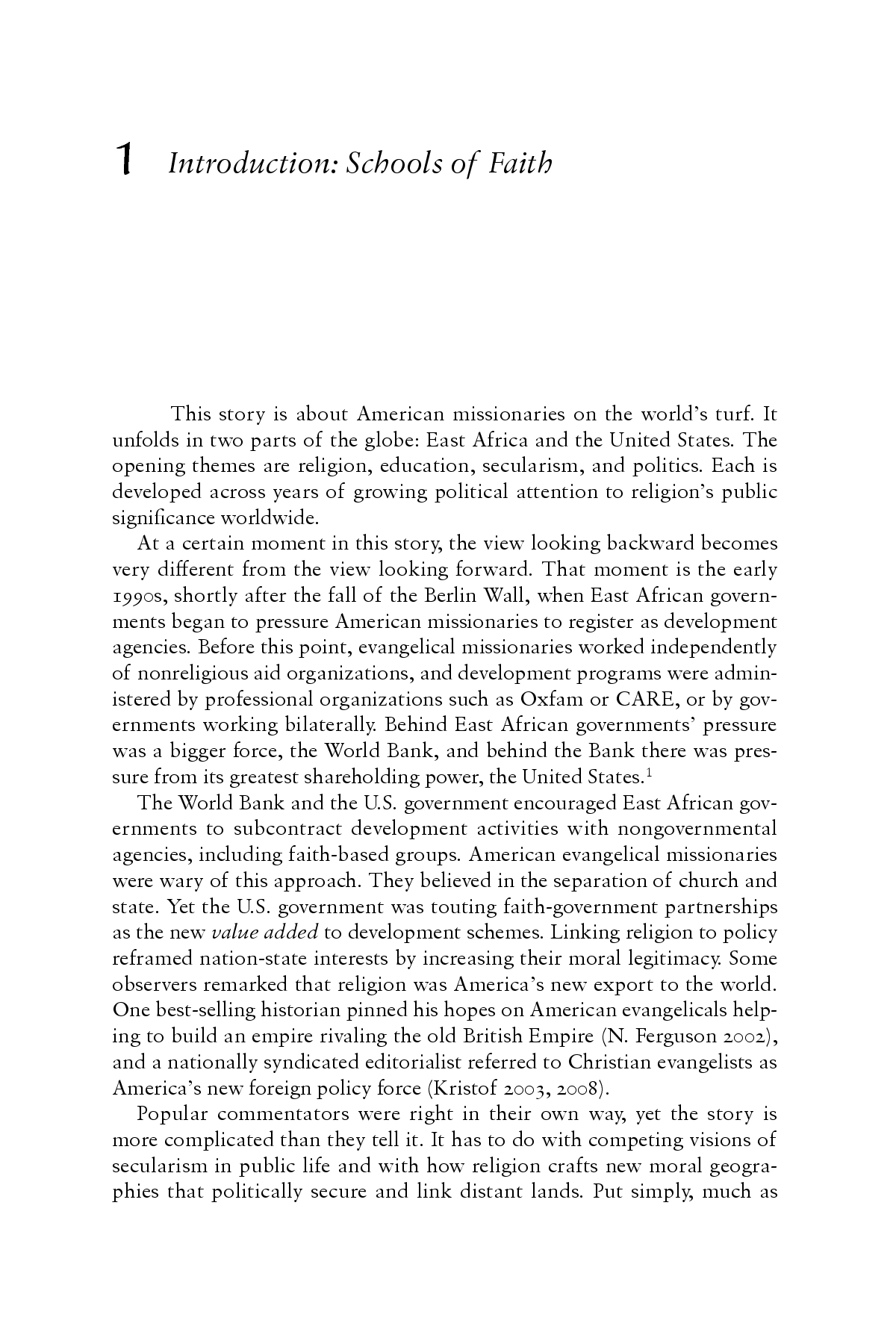 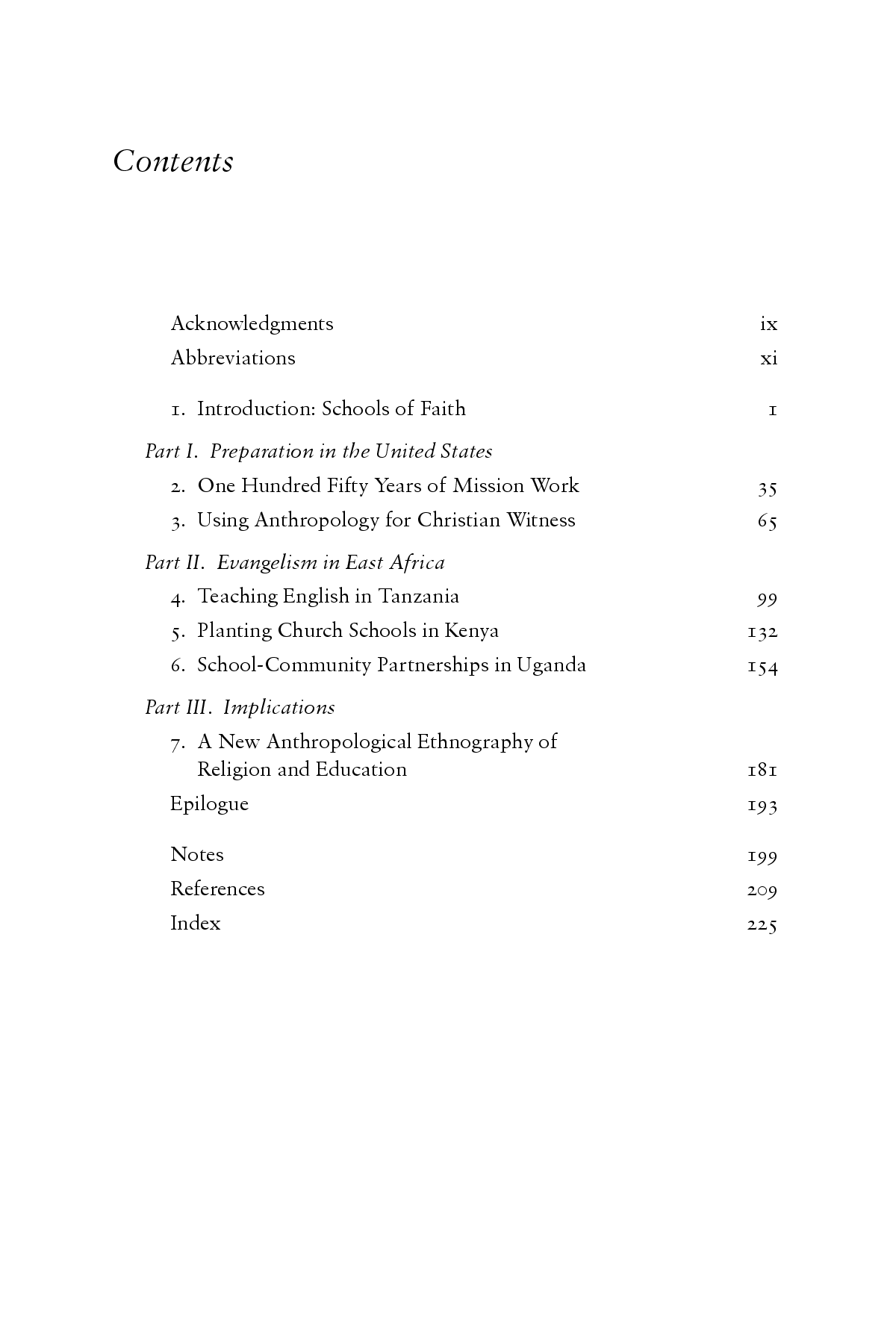