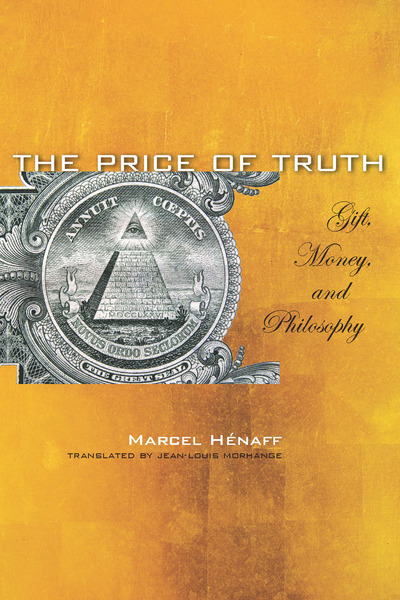 The Price of Truth
Gift, Money, and Philosophy
Marcel Hénaff Translated by Jean-Louis Morhange with the collaboration of Anne-Marie Feenberg-Dibon
SERIES: Cultural Memory in the Present

Can exchange bring us together? Are there any physical or intangible goods that escape the logic of the marketplace? Is there a relationship between truth—the very purpose of philosophy—and money? Does truth have a price? Contrary to the Sophists, who demanded payment in return for their expertise, Socrates spoke for free. He had to do so, according to Aristotle, because knowledge cannot be measured—though he could accept gifts in return.

Today, we expect artists and intellectuals to be compensated for their labors. But is giving merely a form of exchange that was replaced by commerce? Anthropological investigation shows that the issue lies elsewhere: to give is to recognize in order to be recognized. It is to seal an alliance, to give oneself in what is given. Gifting raises further questions regarding the nature of sacrifice and the extent to which this last involves debt or grace.

In The Price of Truth, Hénaff addresses these topics in turn, arguing that the relationship established by the gift lies at the core of the social bond. What emerges is a theory of culture and community formation that accounts for the structural patterns of traditional, political, and market-dominated societies. Crucial here is the idea that gifting and marketplace exchange are incommensurable. The latter, which involves money and contracts, has its own economic, political, and ethical necessity. The gift, though, always raises the ethical question of reciprocal recognition, a radical imperative to respect and be respected. Money has the power to threaten this requirement and break the bond that unites us. Why? To answer is to understand how the—priceless—price of truth is inseparable from that of dignity.

Marcel Hénaff is Professor of Philosophy and Anthropology at the University of California, San Diego. He is the author of Sade, the Invention of the Libertine Body (1999), Lévi-Strauss and the Making of Structural Anthropology (1998), and Public Space and Democracy (2001).

"Marcel Henaff 's book provides much material to ponder. He does a masterful job in looking at the exchange in various forms. . . This book provides substantial insights for the social scientist trying to understand how society is constructed through various modes of exchange. . . [T]o the student of religion who is interested in sacrifice and what this tells us about the ways human relate to relgious deities. . . [F]or economists and those who study economic policy. . .To the academian, this book raises profound challenges as one attempts to teach."

"Among the numerous studies of the 'gift'—ceremonial gift-giving as distinct from exchange and from charity—Marcel Hénaff's wide-ranging book is the best. Its empirical richness is disciplined by a rigorous conceptual framework. This is one of the most important philosophical works of our time, full of inspiring ideas for anthropologists, sociologists, theologians, and historians."

"I owe to the work of Marcel Hénaff entitled The Price of Truth the idea of resolving what he calls 'the enigma of ceremonial reciprocal gift giving' by resorting to the idea of symbolic mutual recognition."

"This rich work by an eminent scholar offers a stunning thesis about the foundations of the social bond. Deeply at home in a variety of disciplines, Hénaff never compromises on rigor. His book is elegantly written and extremely well translated."

"Priceless truths about the price of truth."

—Michel Serres, of the Académie Française 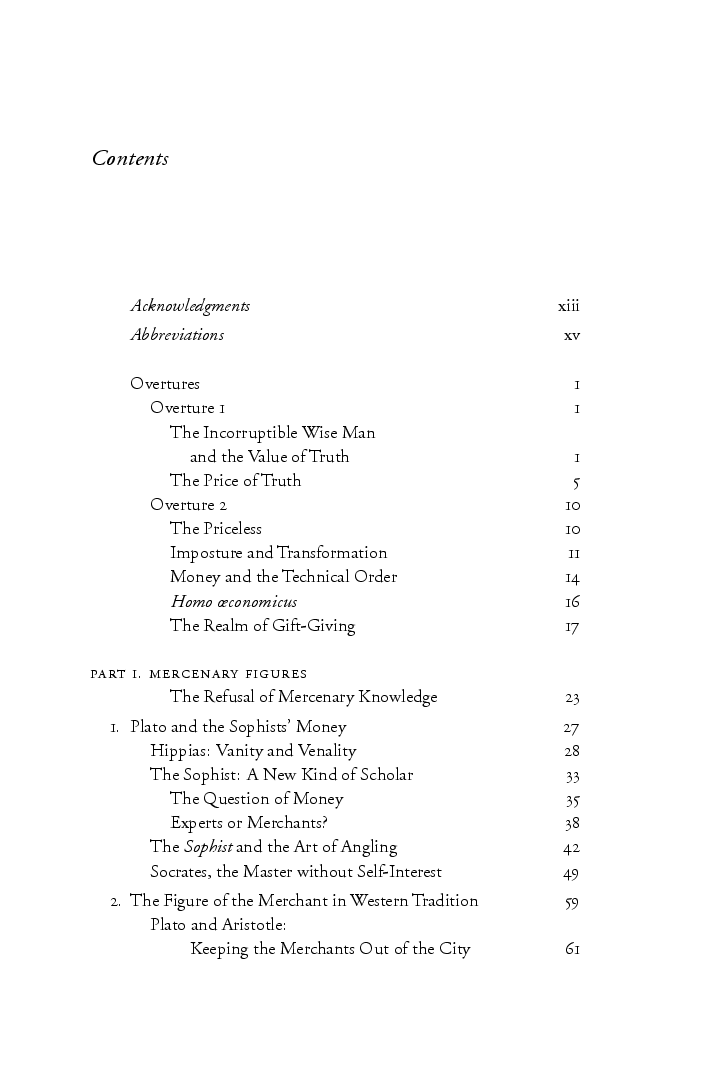