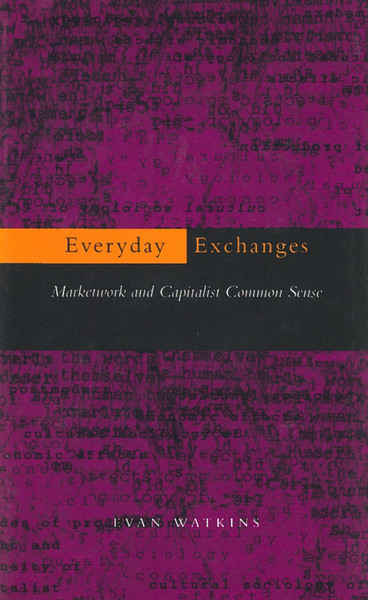 This strikingly original work challenges a familiar assumption within cultural studies: that cultural practices happen in an everyday realm that is potentially open-ended, involving everyone; whereas economics, by contrast, is alien, a force field determined by international financial interests and legitimized by the arid discourses of professional economists. The author argues that, in fact, for most people, most of the time, economic issues are a central part of everyday life.

Separating economics from everyday practices has resulted in seemingly interminable debates over the relative importance of economic conditions and cultural factors in determining the “real” configurations of power relations; it has also reinforced the perception that the capitalist marketplace, now global, permits no alternatives. The author shows instead that a kind of economic sense-making is at work, a “common sense” that conditions a great deal about how many people organize their lives and understand their powers as social agents.

“Common sense,” Gramsci recognized, is always equivocal, multiform, even contradictory, and economic sense-making is no exception. Thus the author pays special attention to conflicting currents of economic sense-making and their social effects, thereby showing how false the assumption of a monolithic and uniform Market actually is. He looks at a wide range of economic practices and assumptions, from transnational corporations and human resources management in the university, to the organization of such very specific markets as the breeding and sale of show dogs.

But Gramsci also understood that, no matter how equivocal and conflicted, common sense imposes parameters of possibility. No political direction is likely to be realized if it is not in some way deeply engaged in mobilizing some aspect of everyday common sense. Accordingly, the author’s ultimate concern in this book is to challenge what he calls “capitalist common sense,” to find, in the complex ensemble of often-conflicting assumptions that consolidate the processes of everyday life into “common sense,” alternative economies to capitalism—alternatives that are already here, in operation, every day.

In conclusion, the author argues for ways such everyday economic practices could be mobilized toward a countercolonial economics that might lead to the further invention of new and decidedly noncapitalist forms of economic organization.

Evan Watkins is Professor of English at Pennsylvania State University. He is the author, most recently, of Throwaways: Work Culture and Consumer Education (Stanford, 1993).