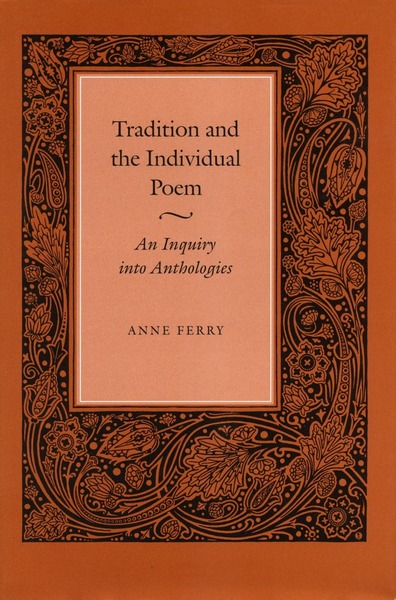 Tradition and the Individual Poem
An Inquiry into Anthologies
Anne Ferry

Anthologies have been a powerful force in poetry and criticism in English ever since the earliest extant book of this kind was published in the sixteenth century. A theoretical, historical, and critical inquiry, Anne Ferry's book looks in detail at the assumptions anthologies are predicated on, how they are put together, the treatment of the poems in them, and the effects their presentations have on their readers' experiences of the poems.

In an anthology the work of many poets is selected and arranged by someone whose aim is to make, out of the writings of others, a book of which the anthologist is the author. Part I explains the classifying terms and defining dimensions—conceptual, spatial, temporal—that make the anthology a unique kind of book. It also explores and illustrates the ways that the presence of the anthologist—in arranging, annotating, titling, and revising the poems—directs how they are read. As examples, Ferry focuses on the three most historically influential of anthologies: Richard Tottel's Songes and Sonettes, Thomas Percy's Reliques of Ancient English Poetry, and Francis Palgrave's The Golden Treasury.

Part II asks how the poems most frequently included in anthologies get there: by what cultural situations, literary circumstances, and internal features. Examples include a group of Renaissance pastoral lyrics, three public poems of 1770, 1867, and 1955, and Elizabeth Bishop's narrative-descriptive poem "The Fish." Part III describes how poets themselves, as readers and compilers of anthologies, have used them, and how anthologies have contributed to the making of poems and the making of their reception. A Coda shows how T. S. Eliot wove certain of his writings into an imaginary anthology that figures his conception of tradition and the individual talent.

Anne Ferry has taught at Hunter, Wellesley, and Boston colleges, Harvard University, and M.I.T. Her most recent book, The Title to the Poem (Stanford, 1996), received the Christian Gauss Award of the Phi Beta Kappa Association.

"Anne Ferry. . . . won a prize for The Title to the Poem and deserves one for her new book, Tradition and the Individual Poem: An Inquiry into Anthologies."

"It is. . . . literary criticism of a sensitive and sensible sort."

"A masterful combination of literary criticism and historical scholarship, Ferry's book constitutes essential reading for anyone interested in poems and literary history, specifically in how certain poems become literary history through the medium of anthologies."Harvard Review

"Ferry's book makes the admirable assertion that the anthology is a worthy and necessary object of critical attention, and her careful research yields rich materials for further study."