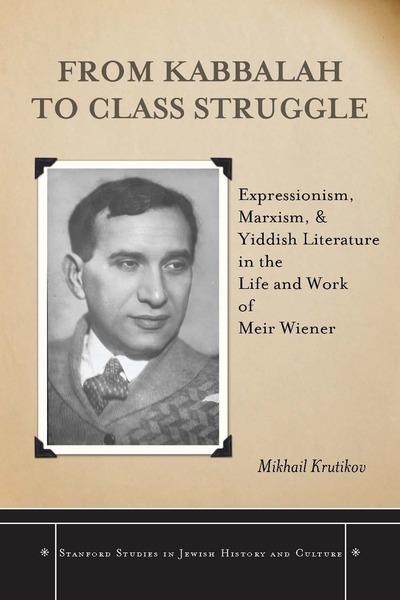 From Kabbalah to Class Struggle
Expressionism, Marxism, and Yiddish Literature in the Life and Work of Meir Wiener
Mikhail Krutikov
SERIES: Stanford Studies in Jewish History and Culture

Winner of the 2012 Fenia and Yaakov Leviant Memorial Prize, sponsored by the Modern Language Association.

Wiener made a remarkable career as a Yiddish scholar and writer in the Stalinist Soviet Union and left an unfinished novel about Jewish intellectual bohemia of Weimar Berlin. He was a brilliant intellectual, a controversial thinker, a committed communist, and a great Yiddish scholar—who personally knew Lenin and Rabbi Kook, corresponded with Martin Buber and Hugo von Hofmannsthal, and argued with Gershom Scholem and Georg Lukács. His intellectual biography brings Yiddish to the forefront of the intellectual discourse of interwar Europe.

Mikhail Krutikov is Associate Professor of Slavic and Judaic Studies at the University of Michigan, Ann Arbor, and the author of Yiddish Fiction and the Crisis of Modernity, 1905-1914 (Stanford University Press, 2001).

"In this engagingly written biography, Mikhail Krutikov has produced an extensive study of the critical and fictional works of the overlooked German-Jewish scholar and writer Meir Weiner (1893–1941) . . . Krutikov's book is an unparalleled contribution to German, Yiddish, Russian, and Jewish studies that opens new venues for transnational and comparative research."

"[D]istinguished . . . No brief review can do justice to the intellectual and social history in this volume, to the author's study of published texts and manuscripts seeking clues for how the picture fits together—and what we can salvage today."

"Mikhail Krutikov's study of Meir Weiner is a meticulously researched, original, and important contribution to the fields of Yiddish, Germanic, Russian, and Jewish Studies . . . This is a pathbreaking work."

"The portrait of Meir Wiener that Krutikov paints in this book is as detailed as the most intricate miniature, and as impressive as the most abstract tableau. His self-proclaimed aim is to recover and rehabilitate this extraordinary figure in all his characteristically twentieth-century turmoil and ambivalence, an aim he ably achieves. Krutikov's writing is a rare combination of the engaging and the meticulous, a mixture much-needed to convey the depth and breadth of his research . . . The great triumph of this work is that it reanimates the voice of Meir Wiener in its proper context. Thus Krutikov's book not only makes an outstanding contribution to the history of Jewish culture, particularly its Yiddish variant; it is also eminently relevant to Marxist and Soviet historical scholarship."

"This fascinating book offers the first complete evaluation of the legacy of Meir Wiener, one of the most prominent Jewish intellectuals and writers of the twentieth century. Wiener was, until now, deprived of well deserved interest and fame because he chose to share the fortunes of the Soviet Yiddish Communist establishment and dedicate himself to the study of modern Yiddish literature and its classics. Krutikov is an ideal commentator, equipped with all the erudition and sophistication the assessment of Wiener's multi-faceted legacy necessitates."

"This groundbreaking study pushes the boundaries of the monograph genre beyond the recovery of a much neglected great Yiddish scholar and writer, Meir Wiener, to revolutionize how we do Jewish cultural history. Krutikov lays out in fascinating detail the story of the unlikely marriage of German expressionism, Jewish mysticism and Soviet Marxism, showing that embracing such contradictory trends was in fact the norm in 20th century Jewish avant-garde literature. An extraordinary achievement of multilingual archival research, this book leads us through the life and afterlife not only of its protagonist but also of European Jewish modernism as a whole, all the way to its coded but stubborn survival in the heart of Soviet socialist realism." 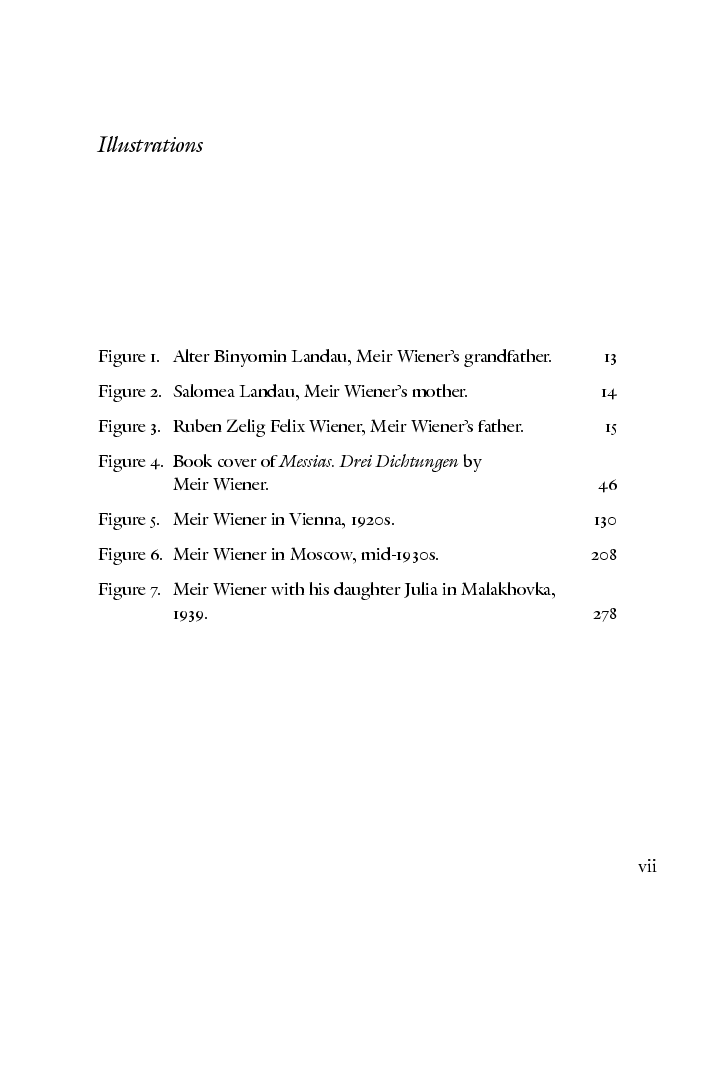 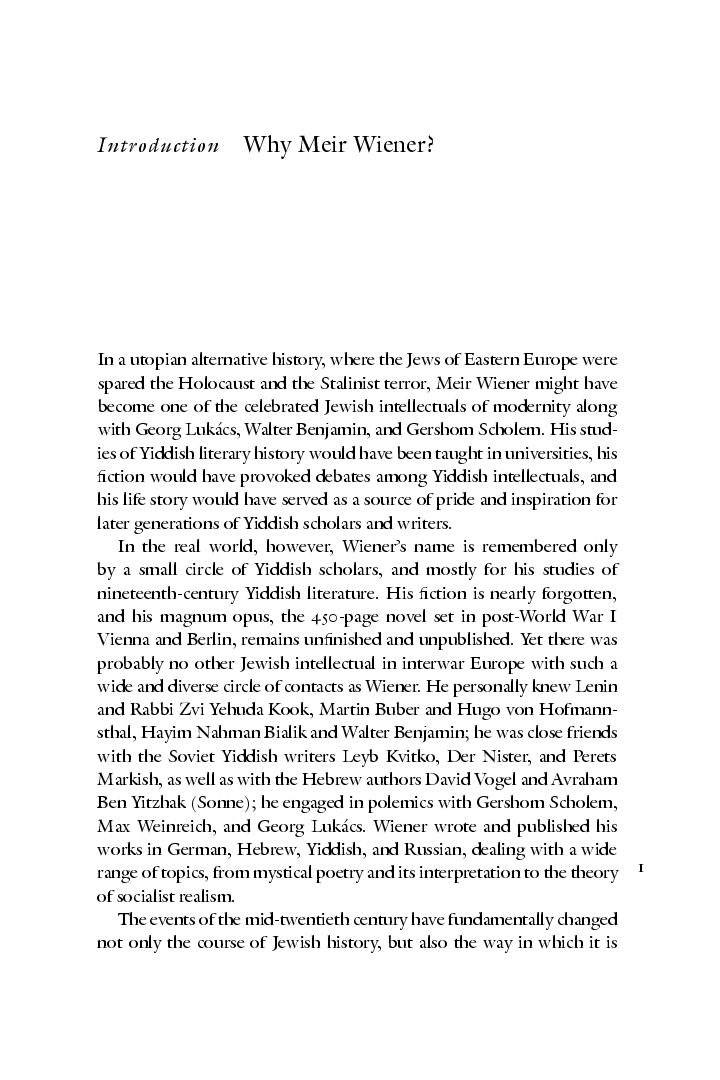 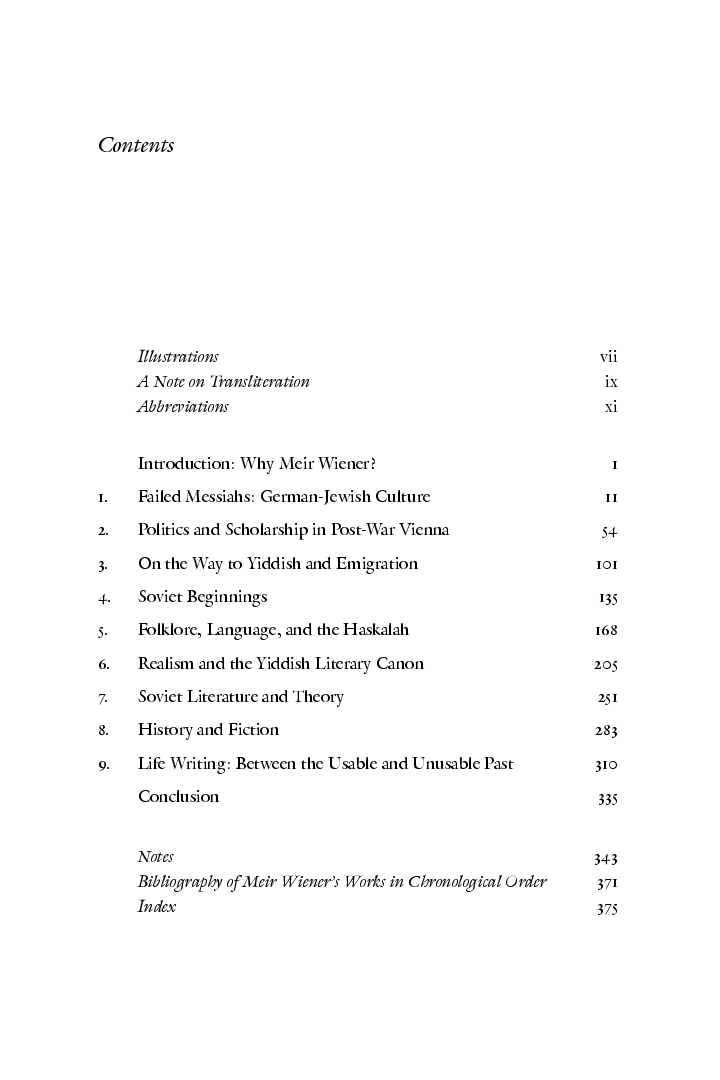