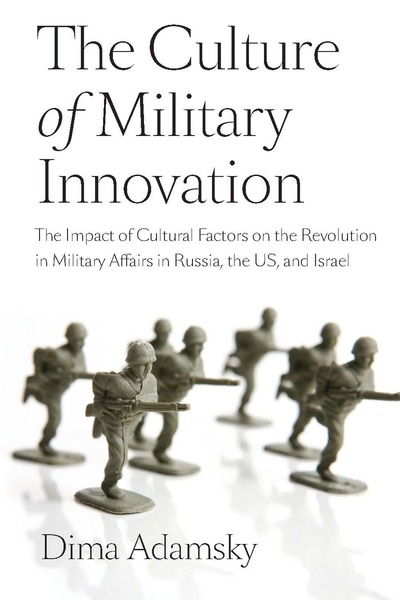 The Culture of Military Innovation
The Impact of Cultural Factors on the Revolution in Military Affairs in Russia, the US, and Israel.
Dima Adamsky

This book studies the impact of cultural factors on the course of military innovations. One would expect that countries accustomed to similar technologies would undergo analogous changes in their perception of and approach to warfare. However, the intellectual history of the Revolution in Military Affairs (RMA) in Russia, the US, and Israel indicates the opposite. The US developed technology and weaponry for about a decade without reconceptualizing the existing paradigm about the nature of warfare. Soviet 'new theory of victory' represented a conceptualization which chronologically preceded technological procurement. Israel was the first to utilize the weaponry on the battlefield, but was the last to develop a conceptual framework that acknowledged its revolutionary implications.

Utilizing primary sources that had previously been completely inaccessible, and borrowing methods of analysis from political science, history, anthropology, and cognitive psychology, this book suggests a cultural explanation for this puzzling transformation in warfare.

The Culture of Military Innovation offers a systematic, thorough, and unique analytical approach that may well be applicable in other perplexing strategic situations. Though framed in the context of specific historical experience, the insights of this book reveal important implications related to conventional, subconventional, and nonconventional security issues. It is therefore an ideal reference work for practitioners, scholars, teachers, and students of security studies.

Dima Adamsky is a fellow at the National Security Studies Program at Harvard University. He has been a visiting fellow at the Institute of War and Peace Studies, Columbia University, and at the Norwegian Institute for Defense Studies.

"Recent and ongoing conflicts have exposed fundamental flaws in what became RMA orthodoxy. The Culture of Military Innovation is useful, in part, because Adamsky illuminates many of the socio-cultural factors that help explain the broad acceptance of false assumptions among military strategists and the propensity of both state and non-state actors to develop military capabilities based on idealised visions of future armed conflict. His study also illuminates the relevance of cultural analysis to self-reflection and criticism."

"Despite the fact that the information- and precision-based RMA has not completely revolutionized all warfare, Adamsky properly recognizes strategic culture as a major factor in military innovation."

"The comparative cultural analysis is comprehensive, thoughtful, and interesting, and the book should be well-received and appreciated by academics and practitioners alike... Adamsky's analysis is impressive and persuasive. The empirical chapters are rich and deep, but also concise, clear, and accessible. From a theoretical perspective, the book is an excellent example of cultural analysis."

"Dima Adamsky's The Culture of Military Innovation is an account of how one intellectual paradigm, called the Revolution in Military Affairs (RMA), rose and fell in the militaries of the USSR, USA and Israel . . . The study distinguishes itself within its subdiscipline for its excellent sources (archival material from all three countries and interviews in Israel), skillful argumentation, and very intelligent case selection. Adamsky's cases connect logically and make for compelling reading."

"Adamsky has written a theoretically robust and empirically compelling account of the development of the revolution in millitary affairs (RMA) in the Soviet Union, the US, and Israel . . . Adamsky's account is brief, but it will be of value to both academics and practitioners. Recommended." -R.M. Farley, CHOICE

"This book is a focused, disciplined, and brilliant effort to use the concept of strategic culture to explain how three countries proceeded in very different ways to develop new ways of warfare based on information technology. It breaks new ground intellectually, in its research and in its analysis, and helps men and women in the world of government better understand the world in which they operate."

"Adamsky's cultural perspective explains why the armed forces of the US, USSR, and Israel were so different from one another in grasping the significance of the Revolution in Military Affairs (RMA) since the 1970s. This rich, sophisticated, and nuanced study is indispensible for students of the RMA, military revolutions, and strategic cultures."

"Culture dominates technical choice—a lesson of both practical and theoretical importance that emerges from this acute study of three of the world's most sophisticated militaries. Adamsky's mastery of three military literatures and the relevant social science makes this a pathbreaking work in strategic studies."

"For Americans, the hardest 'cultural intelligence' lesson contained in The Culture of Military Innovation is that the possession of cutting-edge technology does not invariably lead to strategic genius. It thus behooves the Intelligence Community to monitor the 'dreamers' who sometimes suggest ideas, operational concepts, and applications that appear beyond their capabilities. As Adamsky suggests, ideas that appear fanciful to pragmatic Americans, might actually be a harbinger of systemic effects that will become manifest in the decades ahead."

"This carefully researched work presents a detailed case study in comparative strategic culture and the revolution in military affairs . . . an ideal reference for strategists, scholars, armchair generals, and those interested in applying cultural models to organizational behavior."

"Adamsky's book is an indispensible guide not only to the Israeli experience with the RMA, but also to the manner in which armed forces around the world respond to upheavals in the nature of warfare."

"If you have ever wondered what would happen if postmodernism became a template for organizational management, read this book . . . [T]his book has the potential to raise provocative and important issues for scholars studying the state. For this reason, the book will be of interest to scholars studying peace and war, and it has the potential to attract those interested in politics and culture—and their intersection."

"The future of innovation in the military realm is by no means over . . . Greater wisdom concerning novel innovations in technology and the nature of war is required. The analysis offered in this excellent book is a good starting place to acquire that wisdom." 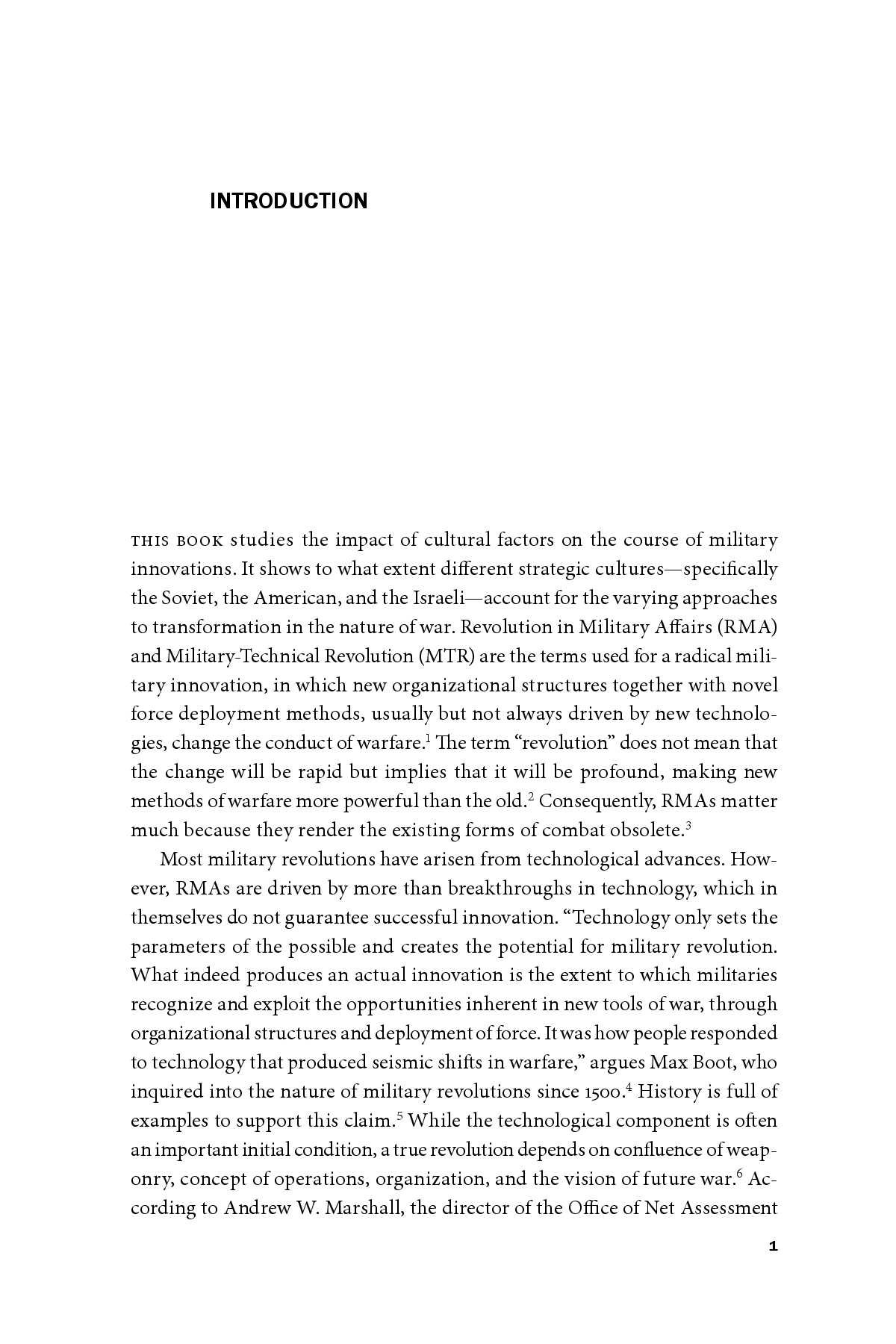 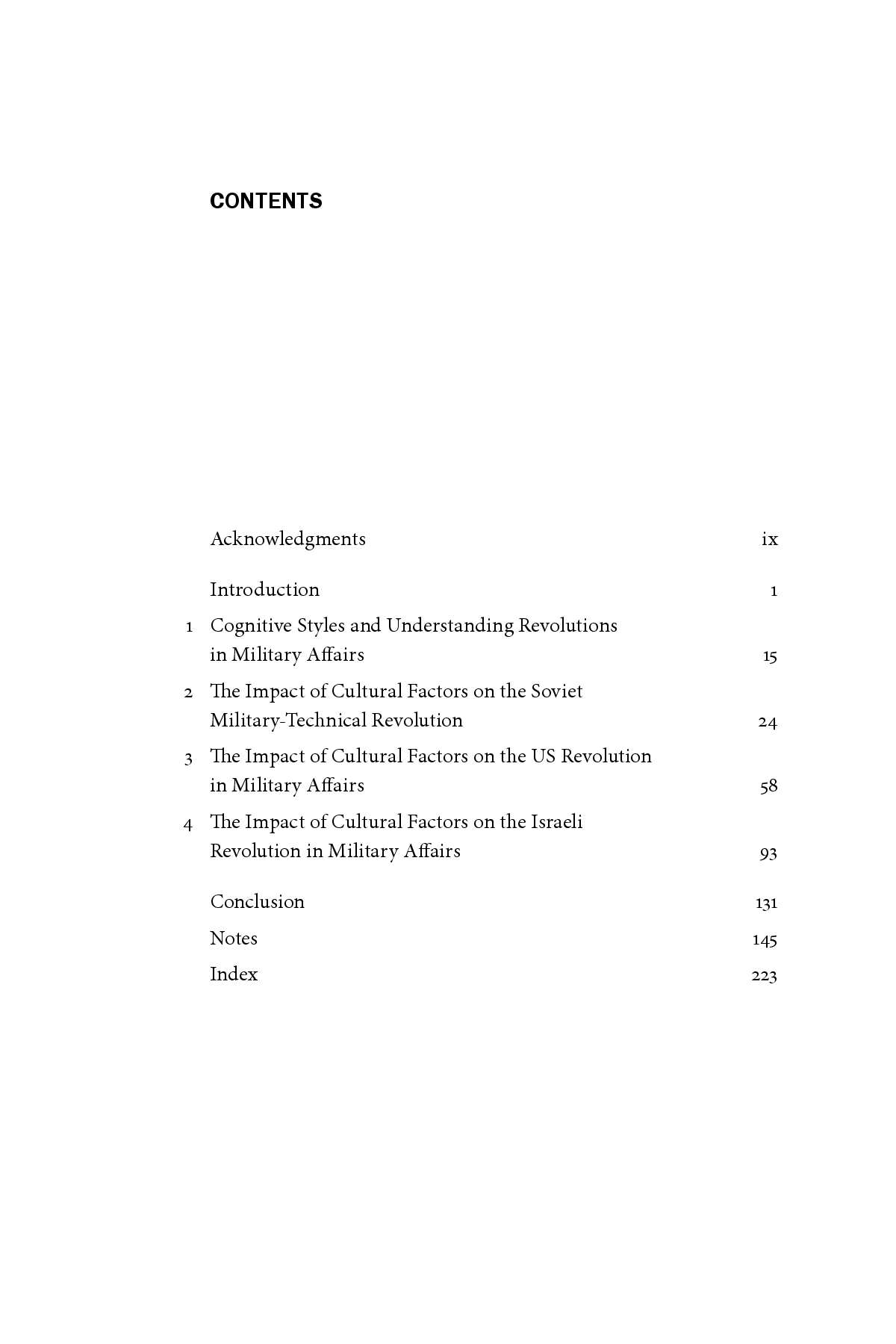