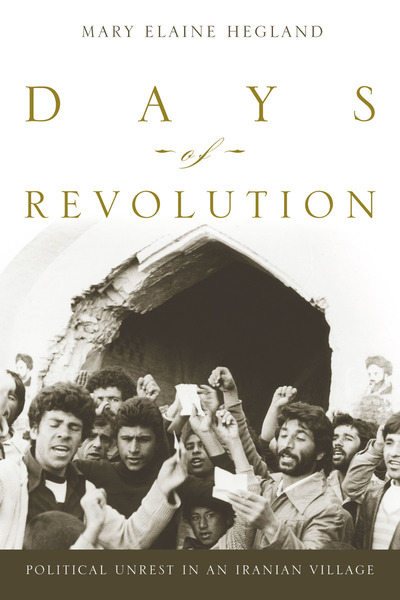 Outside of Shiraz in the Fars Province of southwestern Iran lies "Aliabad." Mary Hegland arrived in this then-small agricultural village of several thousand people in the summer of 1978, unaware of the momentous changes that would sweep this town and this country in the months ahead. She became the only American researcher to witness the Islamic Revolution firsthand over her eighteen-month stay. Days of Revolution offers an insider's view of how regular people were drawn into, experienced, and influenced the 1979 Revolution and its aftermath.

Conventional wisdom assumes Shi'a religious ideology fueled the revolutionary movement. But Hegland counters that the Revolution spread through much more pragmatic concerns: growing inequality, lack of development and employment opportunities, government corruption. Local expectations of leaders and the political process—expectations developed from their experience with traditional kinship-based factions—guided local villagers' attitudes and decision-making, and they often adopted the religious justifications for Revolution only after joining the uprising. Sharing stories of conflict and revolution alongside in-depth interviews, the book sheds new light on this critical historical moment.

Returning to Aliabad decades later, Days of Revolution closes with a view of the village and revolution thirty years on. Over the course of several visits between 2003 and 2008, Mary Hegland investigates the lasting effects of the Revolution on the local political factions and in individual lives. As Iran remains front-page news, this intimate look at the country's recent history and its people has never been more timely or critical for understanding the critical interplay of local and global politics in Iran.

Mary Elaine Hegland is Professor of Anthropology at Santa Clara University. She was the only American scholar in Iran conducting field research during the Islamic Revolution, and one of very few to have access to the country in the 30 years since.

"This refreshingly people-centred account of the Revolution drama in Iran in 1979 uses a new focus to demonstrate and understand how the Revolution happened in one large village in Iran, what preceded it there and how local people fit their own situations into the revolutionary frame . . . Well written [...], this book is a gem in political anthropological writing. No other text about modern Iran provides such clear insights into the relationships among political, economic and cultural factors, between the personal and political, rural and urban dynamics in rapid culture change in Iran."

"The account she skillfully weaves is one of the more engaging studies of Iranian culture to come out in recent years. The personal details of a young American with a one-year-old child settling in to do research in Aliabad, near Shiraz, is captivating as well as instructive in the best reflexivist manner. Being an American at the time of the Iranian revolution created problems beyond the usual settling-in tropes, but also provided an opportunity to witness the revolution from the group up . . . [I]t is her acute observation and interaction that inform her work. The primary value of Hegland's study is her narration of the Iranian revolution outside Tehran. She provides a detailed account of the local economic and political history in cultural context."

"There are a few ethnographic works dealing with politics at a rural level and almost none on the intersection of the revolutionary politics and inner family—kinship dynamics. Mary Hegland's book fills such a gap by offering a close look at how a village becomes engaged and affected by a revolution . . . Written as a clear, lively, and meaningful ethnography, Days of Revolution narrates Hegland's field experiences and demonstrates the dynamics of political engagement at the rural level, interrelations of local influential characters, and the forces and mechanisms connecting local politics to national processes."

"Through numerous interviews and eighteen months of participant observation, Hegland is able to decipher the individual and collective norms, practices, and perceptions related to traditional, kinship-based political competition and conflict that influenced peasants to join or resist the revolution . . . Beyond Iranian history and politics, Days of Revolution will equally appeal to readers with a broader interest in revolutions and social movements . . . Days of Revolution is an impressive work and makes a significant contribution to the scholarship on Iran, revolutions and social movements."

"In this fascinating study, written with the hindsight of 34 years, Hegland shows that in Iran, no less than in America, the late Speaker of the House of Representatives Tip O'Neill's adage that 'all politics is local' applies."

"There are a great number of books on the Islamic Revolution, but none have accomplished what Mary Hegland has. This is an exceptional study of modern Iran, offering a detailed account of village life before, during, and after the Islamic Revolution. A brilliant book that deserves to be widely read."

"An important and timely book, Days of Revolution offers rich detail about a part of Iran rarely talked about in popular discourse. With unique insights, this book will no doubt be of interest to anyone thinking about Iran in modern times."

"In this time, when Iran's policies continue to vex the leaders of the Western world, Mary Hegland's book provides a distinctive and rare peek behind official propaganda to reveal what life has been like for ordinary citizens in the last four decades under the Revolutionary government."

"[Hegland's] work is particularly interesting to former Peace Corps Volunteers as her insights into the inner workings of village politics are unsurpassed in Iranian studies . . . [Hegland's] conclusions 34 years later are enlightening in terms of how the villagers have adapted to current national trends and updated social relations among its young men and women."

"Mary Elaine Hegland is the only American scholar to have conducted fieldwork in Iran during the 1979 Islamic Revolution. In Days of Revolution she shares her ethnographic account about the transformation of quotidian life in 'Aliabad,' a village neighboring Shiraz, during and after those critical moments. As such, it is a welcome contribution to the growing body of scholarly literature on the revolution . . . [D]ue to the unique insights into the village life during the revolutionary period, and political and historical information, students of contemporary Iran and cultural anthropology would benefit from reading this rare longitudinal ethnographic study."

"A rare and intimate account of village life before, during, and after the 1979 Islamic Revolution, Days of Revolution challenges some of the most frequently publicized assumptions concerning the Revolution; it provides new insight into the ways in which local politics and models, for and of action, can inform national events and reveals the tremendous value of longue durée ethnographic research."

"[Hegland's] study accomplishes what earlier ethnographies could not, through detailing changes in kinship politics, state authority, and social structures over a revolutionary interregnum....In the end, Hegland's political anthropology of an Iranian village is as much about five decades of socioeconomic modernization as it is a witness to rural life under a revolution." 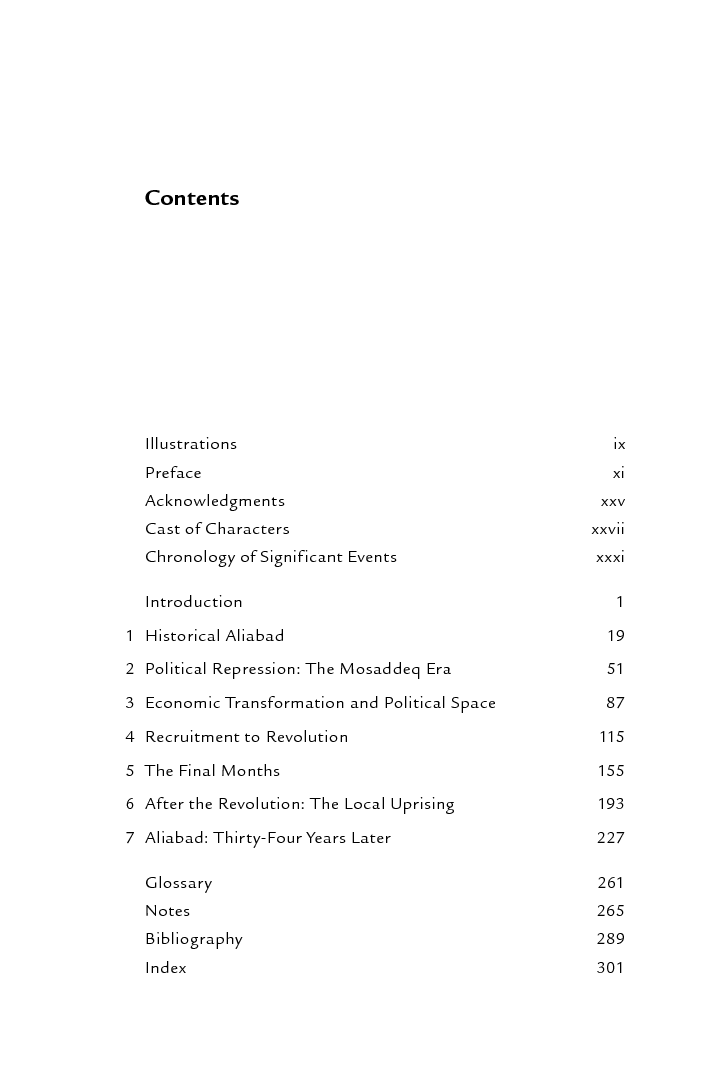 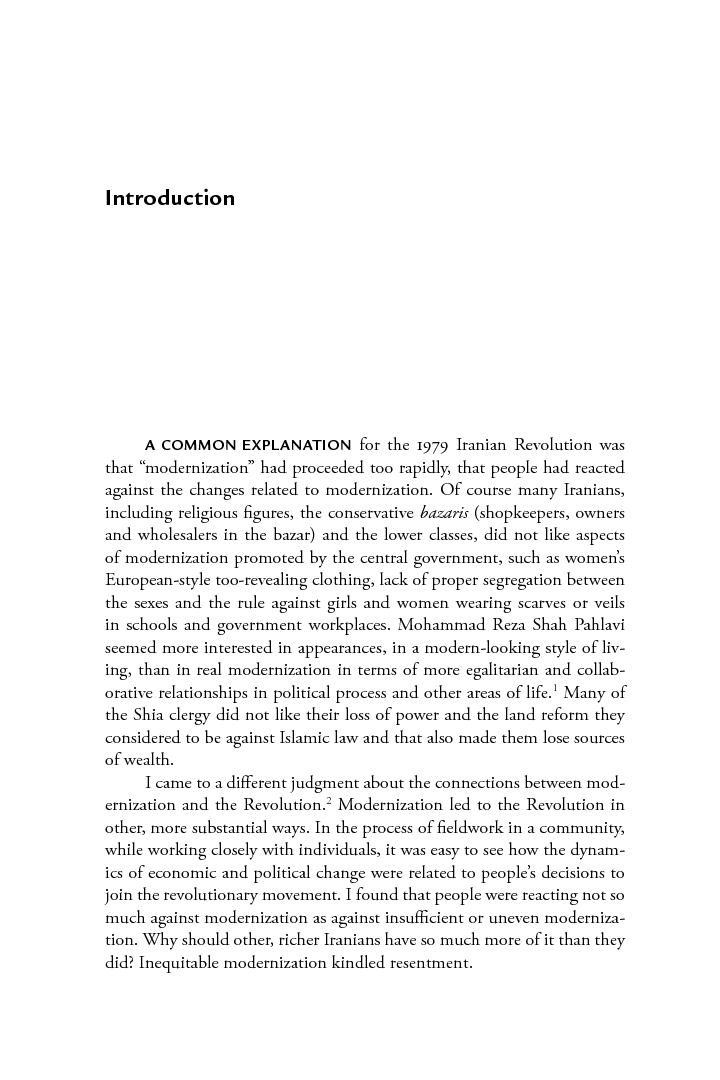 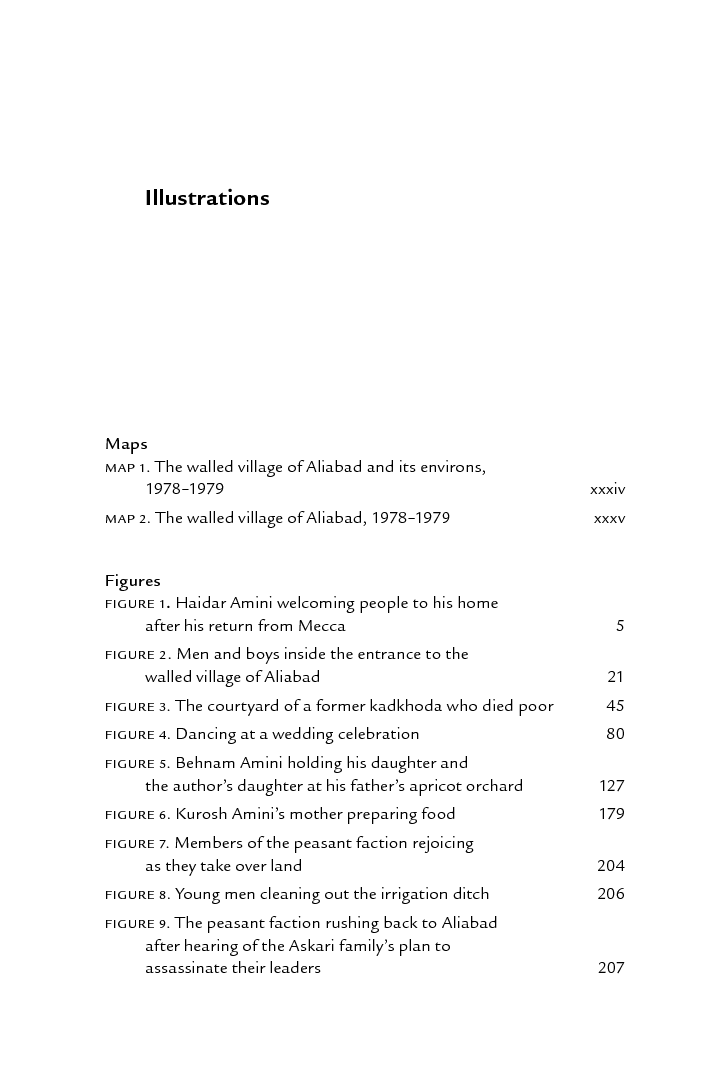 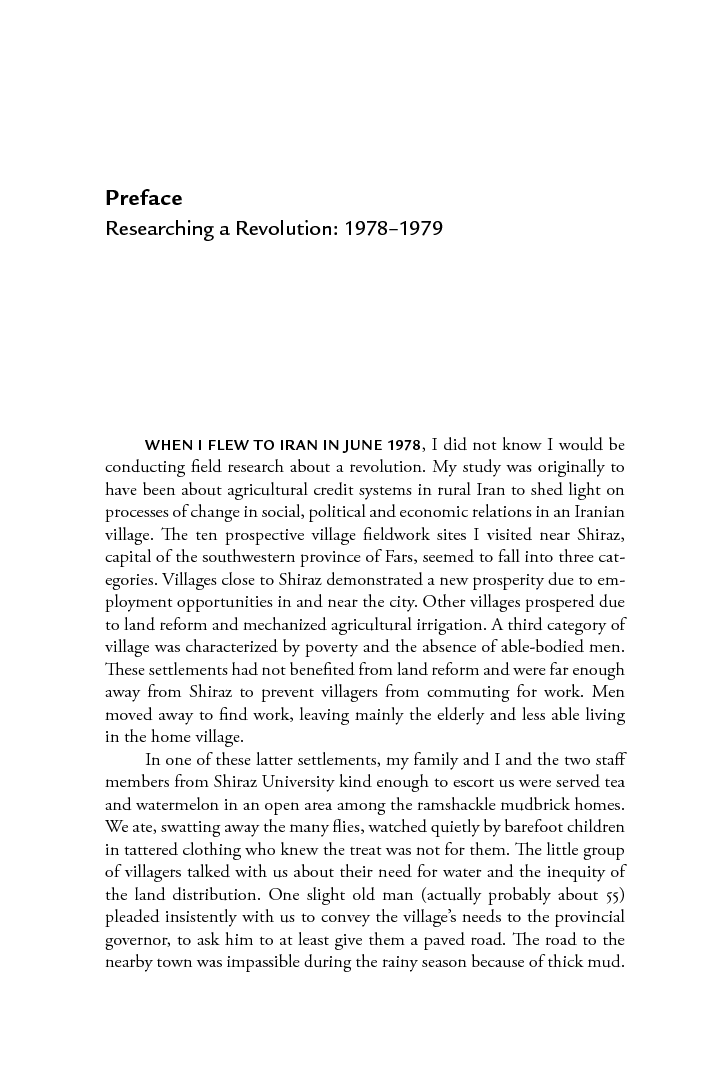