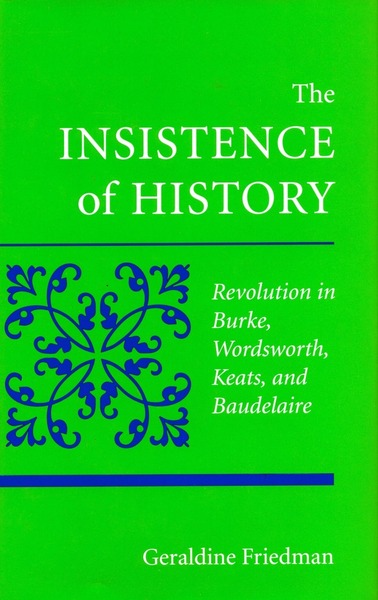 The Insistence of History
Revolution in Burke, Wordworth, Keats, and Baudelaire
Geraldine Friedman

Through a series of theoretically informed readings, this book explores the uncanny effectivity of history in its seeming absence in canonical works by Burke, Wordsworth, Keats, and Baudelaire written in the shadow of the French Revolution and the Revolution of 1848. The book begins with the discovery that, in these writers, issues of narration and figuration are already taken up in the political and historical questions raised by the two revolutions; conversely, historical-political positioning and representation are involved from the beginning in problems of narration and figuration.

This co-implication of aesthetics and history in each other has profound consequences: once historical events take the form of figures, they no longer act as literal, material referents but rather interrogate the status of reference itself. Far from being denied, history becomes a problem for analysis, one whose normative frames of understanding and founding concepts, such as “event,” “experience,” and “chronology,” must be rethought. This can be most easily seen in the fact that the four writers, in their different ways, all miss historical occurrence—not when they try to flee it, as many older accounts of Romanticism have claimed, but just when they attempt to engage it most intensely.

Geraldine Friedman is Associate Professor of English at Purdue University.

“Friedman has written a powerful, rigorous, and intense work that combines in an original and advanced way two of the most vital (and hitherto usually antagonistic) directions of post-structuralist literary criticism: historicism and deconstruction. And she accomplishes this feat of strategic positioning without sacrificing her considerable tactical skills for local reading. Mediating between broad theoretical reflection and the closest kind of textual scrutiny, her readings are throughout inventive, adept, capable of surprise.”—Alan Liu, University of California, Santa Barbara