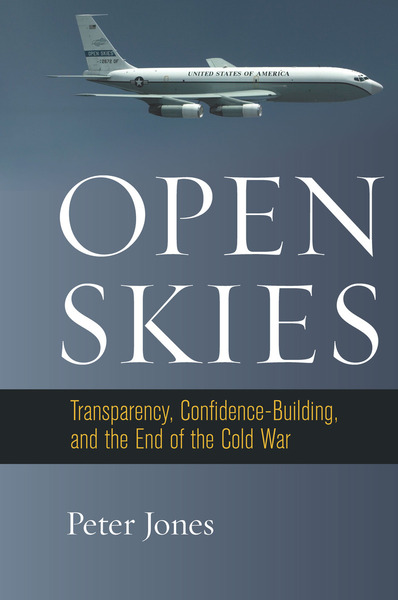 Open Skies
Transparency, Confidence-Building, and the End of the Cold War
Peter Jones

This book recounts and analyzes the history of one of the best-kept diplomatic and security secrets of the last half-century—the Open Skies Treaty: a treaty that allows the U.S., the Russian Federation, and over 30 other signatories to fly unarmed reconnaissance aircraft over one another's territory. First proposed by President Eisenhower in 1955, shelved by succeeding administrations, re-launched by President George H. W. Bush in 1989, and finally ratified in 2002, the Treaty has been one of the most important security instruments of the 21st century—with over 1,000 flights logged to date providing confidence for the governments, intelligence communities, and militaries of former and potential adversaries.

Written by a professor and former diplomat who was deeply involved in the negotiations of the Open Skies Treaty from 1989 to 1995, this book is a meticulous work of political history that explores how Open Skies affected, and was affected by, the extraordinary times of its negotiation—during which the Cold War ended and the Soviet Union collapsed. But it is also a potential blueprint for future applications of the Open Skies concept by providing insights into the role that cooperative aerial monitoring can play in helping to transform other difficult relationships around the world. As such it will serve as a negotiation handbook for diplomats, bureaucrats, and politicians and as a case-study textbook for IR students and students of diplomacy.

Peter Jones teaches in the Graduate School of Public and International Affairs at the University of Ottawa, Canada.

"Open Skies will be of great value to anyone who deals with negotiations or agreements of an international nature. Author Peter Jones does an excellent job of supplying in-depth details and analyses of the two-year process of developing and ratifying the treat. At the same time, he fairly explains the contrasting viewpoints of the significant parties and how they were eventually overcome or resolved."

"Peter Jones, an eminent political scientist and former Canadian Arms Control Negotiator, has written an absorbing book of scholarship covering the history of Open Skies from the time it was first proposed by President Eisenhower in 1955 to the present day . . . [T]he account is well written and comparatively easy to follow. The chronological structure, with wide-ranging notes and a good index, leads both experts and the less-informed comfortably through to the end."

"In his Open Skies: Transparency, Confidence-Building, and the End of the Cold War, Peter Jones, a Canadian political scientist and former arms-control negotiator, takes a detailed look at the 1990–92 Open Skies negotiation. The result is an extremely well-researched and accurate book—a must-read for anyone who would like to know more about the sometimes fascinating technicalities of arms-control negotiation. "

"Open Skies is a crash course on negotiations that de-mystifies the process and equips rookies and veterans alike to be much more effective negotiators. Every person assigned to a Geneva, Vienna, or New York delegation ought to read this book before reporting for their first day on the job. The book is so readable and the analysis so well done that it can be assigned for students at any level, allowing them walk a mile, indeed many miles, in Jones' uncomfortable shoes."

"The Open Skies Treaty deserves more attention given that it has played a significant role in the past and can be even more vital in the future. In this important book, Peter Jones provides a great service by offering just what is needed to place the Treaty in historical context and to highlight the potential future role for aerial monitoring."

"Open Skies is a meticulous account of one of the most complex multilateral arms control treaties ever negotiated. Dr. Jones skillfully describes the evolution of the Open Skies Treaty from its inception, highlighting the delicate interaction of the disparate stakeholders: diplomats, scientists, and military. An insightful and unique look into the negotiating dynamics at the end of the Cold War."

"The book offers a fascinating behind-the-scenes story of a NATO-Warsaw Pact negotiation just at the moment when the Soviet Union was coming apart. The bureaucratic players in both Moscow and Washington seemed unable or unwilling to recognize and act on the new set of facts, while their political masters were. As such, this book provides an invaluable case study in the linkage between national leaders and their experts; new insights into a turning point in history; a riveting portrait of multilateral diplomacy; and a suspenseful tale of how professionals interacted as the ground beneath their feet collapsed."

"Peter Jones's Open Skies: Transparency, Confidence-Building, and the End of the Cold War explores what is perhaps an underappreciated legacy of the Cold War: that the United States, Russia, and thirty-two other nations may fly over each other's territory to conduct reconnaissance thanks to the Open Skies Treaty, which was negotiated between 1989 and 1992....Those interested in this particular period in Cold War history as well as diplomatic historians seeking to understand the challenges of conflict resolution will find a largely nuanced and complex account that has continued relevance given the heightened tensions between the two nations." 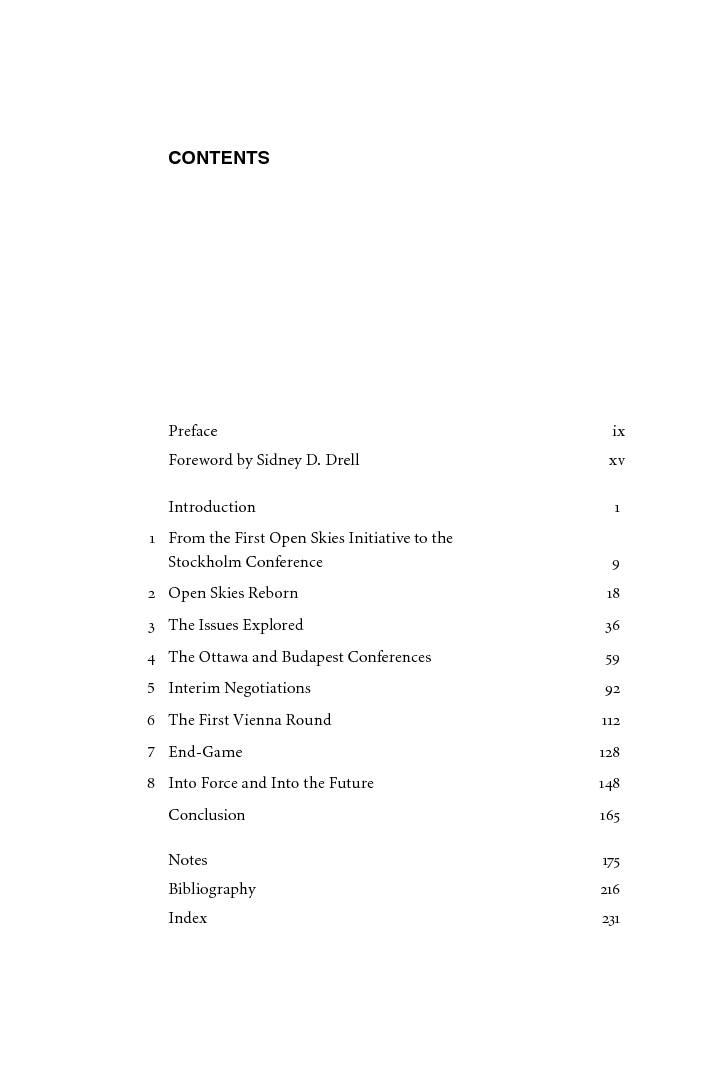 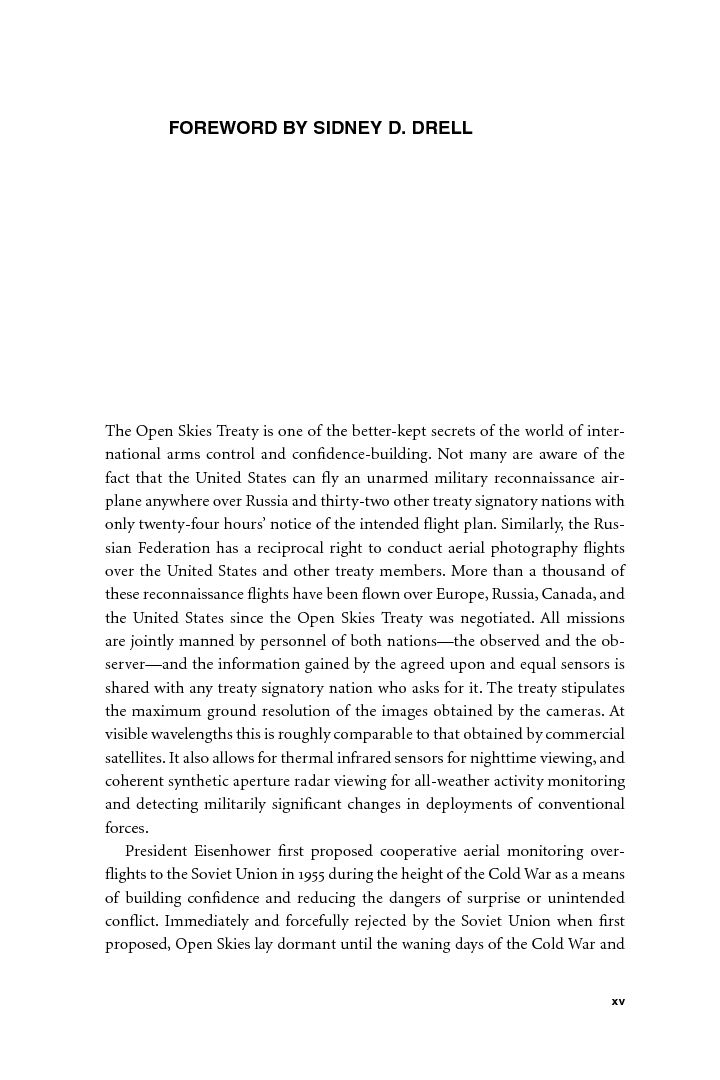 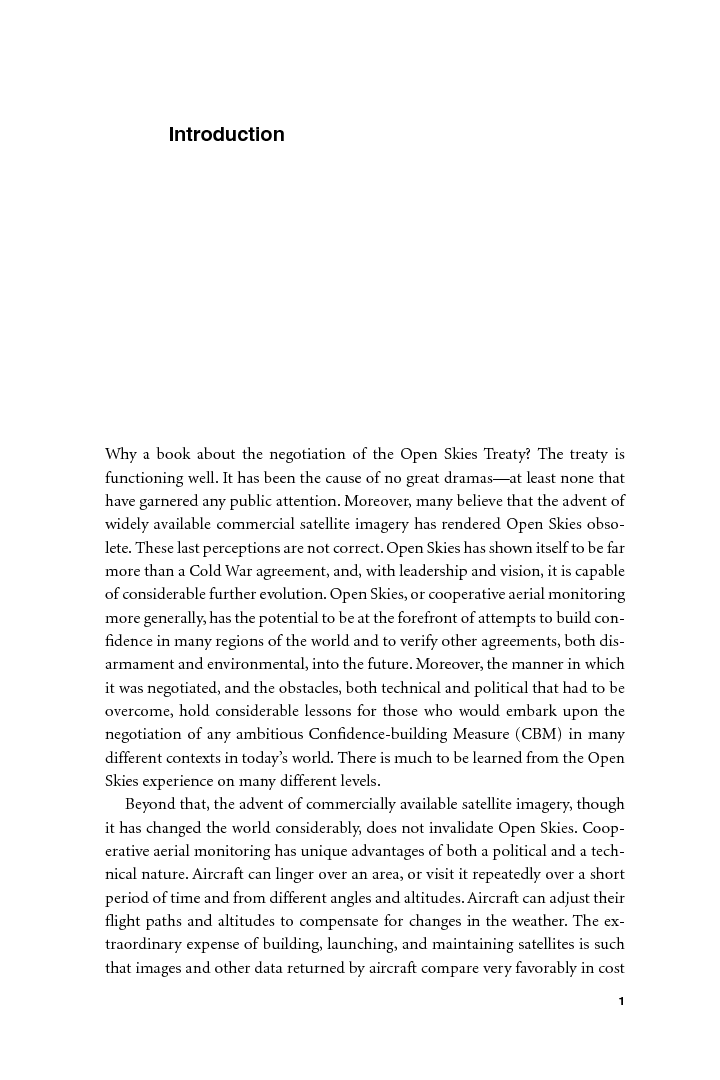 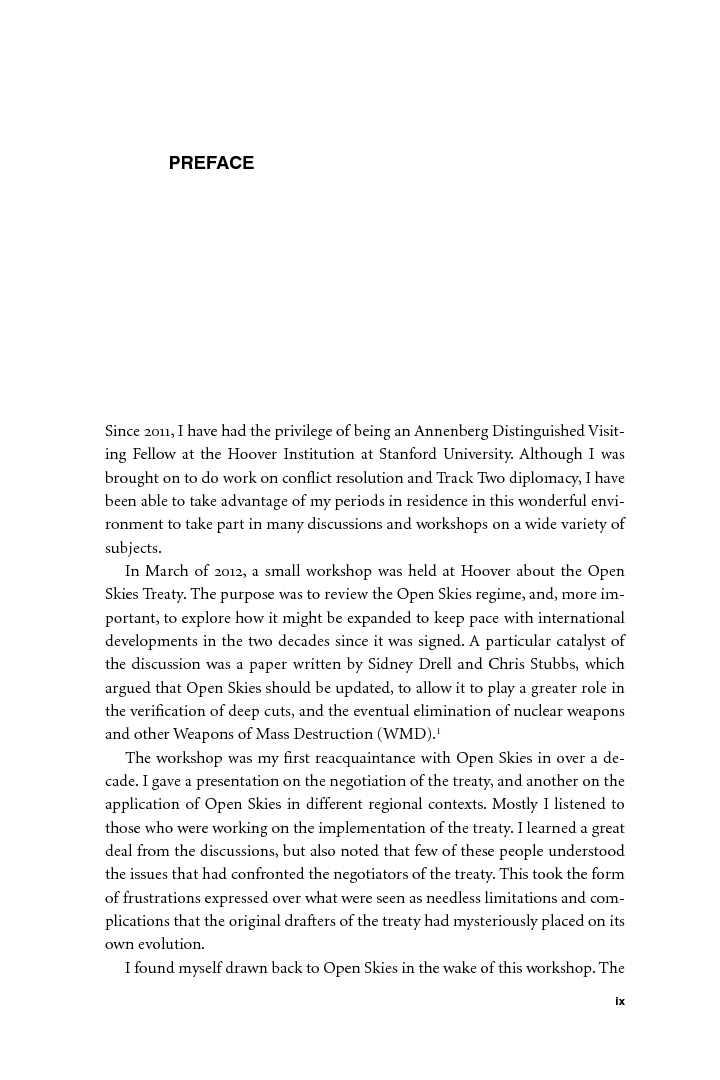