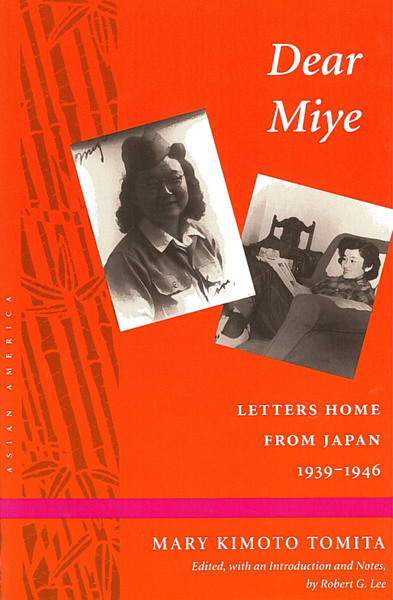 Winner of the 1996 Special Citation for Outstanding Book Award, sponsored by the Association for Asian American Studies.

These letters tell the story of a young American woman of Japanese descent who, along with over 10,000 other Japanese Americans, was stranded in Japan during World War II.

"The letters give a sense of immediacy in her descriptions of conditions in prewar, wartime, and postwar Japan. They also reveal an ordinary, resourceful, sassy, yet vulnerable young woman negotiating her way through tough situations."

"Tomita's commentary on the racial prejudices, economic disparities, moral dilemmas, and day-to-day social and sexual politics that she observed and experienced provides an intimate account of Japanese society, as well as a critique of U.S. society as represented in microcosm by the Allied occupation establishment."

"The letters cover three periods: the prewar years (1939-41); the war years (1941-45); and the postwar years (1945-46), during which Tomita worked as a civilian employee for the U.S. occupation forces pending her repatriation. As an 'indelibly American' woman, she describes the conflict of competing political loyalties, gender role expectations, and ethnic identity in a voice of immediacy and authenticity that make these intensely personal, unselfconscious letters a valuable contribution."

"A fascinating, and often passionate firsthand description of Japanese, American, and Japanese American society from 'over there.'"