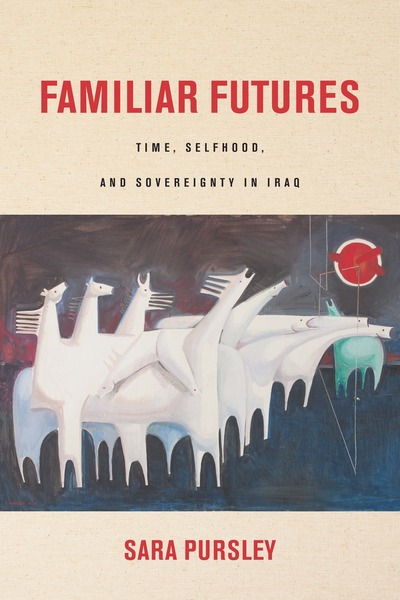 Honorable Mention in the 2020 AMEWS Book Award, sponsored by the Association for Middle East Women’s Studies.

Iraq was the first postcolonial state recognized as legally sovereign by the League of Nations amid the twentieth-century wave of decolonization movements. It also emerged as an early laboratory of development projects designed by Iraqi intellectuals, British colonial officials, American modernization theorists, and postwar international agencies. Familiar Futures considers how such projects—from the country's creation under British mandate rule in 1920 through the 1958 revolution to the first Ba'th coup in 1963—reshaped Iraqi everyday habits, desires, and familial relations in the name of a developed future.

Sara Pursley investigates how Western and Iraqi policymakers promoted changes in schooling, land ownership, and family law to better differentiate Iraq's citizens by class, sex, and age. Peasants were resettled on isolated family farms; rural boys received education limited to training in agricultural skills; girls were required to take home economics courses; and adolescents were educated on the formation of proper families. Future-oriented discourses about the importance of sexual difference to Iraq's modernization worked paradoxically, deferring demands for political change in the present and reproducing existing capitalist relations. Ultimately, the book shows how certain goods—most obviously, democratic ideals—were repeatedly sacrificed in the name of the nation's economic development in an ever-receding future.

"Familiar Futures is an extraordinary book, at once theoretically informed and empirically rich. Sara Pursley offers an original and compelling reading of the relationship between decolonization and modernity in Iraq that considers time, economic development, political sovereignty, psychology, education, and the importance of gender in the articulation of national identity. It is an example of critical history at its best."

"Familiar Futures marks an important examination of the intellectual underpinnings of the development projects shaped by Iraqi nationalists, revolutionaries, and intellectuals. Sara Pursley offers an original reading of modern Iraqi history and a thoughtful meditation on time and selfhood."

"Addressing the generative tension between modernity as a transformative promise of the future and as a repetition of the same, Familiar Futures explores sovereignty and subject formation in twentieth-century Iraq as inextricably linked to temporality, gender, and sexuality. In this brilliant work of imaginative scholarship and interdisciplinary theorization, Sara Pursley pushes us to rethink the history of the modern Middle East and the postcolonial predicament more broadly."

"Familiar Futures seems destined to approach the hallmark of intellectual distinction to which so many historians aspire––to say something so interesting and important that it captures the attention of readers who might otherwise have no particular reason to care about the narratives and details so central to our own fields."––Kevin Jones, Arab Studies Journal

"Sara Pursley's excellent book is full of insights and in-depth reflections....Familiar Futures will be highly influential as a critique of concepts of modernity in modern Middle Eastern societies."

"The first pages [of Familiar Futures] set the scene for the main questions of the book: the relationship between revolutionary time and gendered time, the intensified investment in girls' and women's lives, how economic development and the gendered social reform came to trump all other visions of the good life, and how the Iraqi territorial state came to infiltrate the intimate lives of Iraqi subjects and to mold their experience of citizenship. The answers to these questions, Pursley offers, have everything to do with particular modern temporal sensibilities that came to dictate Iraqi citizens' orientation to the future."

"Through an expert weaving of social theory and social history, including close readings of works by Iraqi intellectuals written in Arabic, Pursley demonstrates how family and gender reform initiatives served to institutionalize the 'disciplinary and biopolitical power' of the state over its national subjects."

"In a Koselleckian tradition, Pursley not only offers us a tantalizing critique of modernization and modernity, but also challenges us to rethink the boundaries between history, historiography and theory: an opportunity to reflect on the positioning of the history of Iraq within interdisciplinary theories."