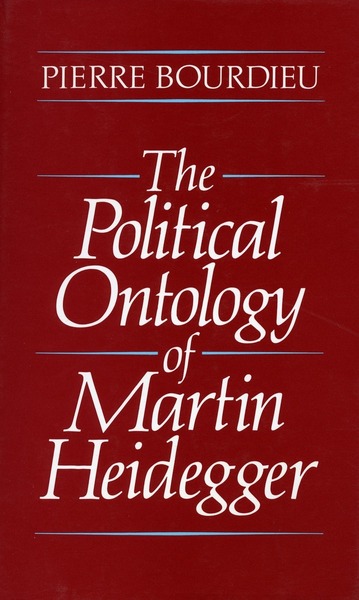 Martin Heidegger's overt alliance with the Nazis and the specific relation between this alliance and his philosophical thought—the degree to which his concepts are linked to a thoroughly disreputable set of political beliefs—have been the topic of a storm of recent debate. Written ten years before this debate, this study by France's leading sociologist and cultural theorist is both a precursor of that debate and an analysis of the institutional mechanisms involved in the production of philosophical discourse.

Though Heidegger is aware of and acknowledges the legitimacy of purely philosophical issues (in his references to canonic authors, traditional problems, and respect for academic taboos), Bourdieu points out that the complexity and abstraction of Heidegger's philosophical discourse stems from its situation in the cultural field, where two social and intellectual dimensions—political thought and academic thought—intersect.

Bourdieu concludes by suggesting that Heidegger should not be considered as a Nazi ideologist, that there is no place in Heidegger's philosophical ideas for a racist conception of the human being. Rather, he sees Heidegger's thought as a structural equivalent in the field of philosophy of the "conservative revolution," of which Nazism is but one manifestation.

Pierre Bourdieu is Professor of Sociology at the Collège de France and Director of Studies at the École des Hautes Études en Sciences Sociales.

"Bourdieu is a sociologist with a remarkably wide range of competences, and his short book on Heidegger, published before the recent revelations of the philosopher's devoted commitment to Nazism through and beyond the defeat of the Third Reich, is a brilliant contribution to what is now called 'contextualization' (i.e., of Heidegger's thought). Richard Rorty dismissed Heidegger's Nazism on the ground that it had nothing to do with his philosophy; no reader of Bourdieu's book will be able to continue to believe this for a moment."

"Bourdieu's book is the single most illuminating contribution to an understanding of the social and political meaning of Heidegger's work. It is extremely stimulating in its methodology, which is an outstanding model of a sociological approach to philosophy, and in the light it casts on the current debate over Heidegger and Nazism. Bourdieu's book stand apart from the other books and articles on the political implications of Heidegger's philosophy."

"Bourdieu's short study of the overlap between politics and philosophy in Heidegger's work is the most exciting and thought-provoking contribution to the recent flood of writings on this topic so far. Written in 1975, long before the furor started by Victor Farias' 1987 Heidegger and Nazism, Bourdieu tells us his essay is intended not as an indictment of Heidegger, but as an 'exercise in method,' (though this claim comes to seem disingenuous before one is through). What fascinates Bourdieu is the way Heidegger implants a 'vulgar,' conservative message in what is supposed to be pristine, 'essential' philosophical thinking. . . . Bourdieu's approach helps to situate Heidegger's texts within the wider context of social and historical developments of his time."