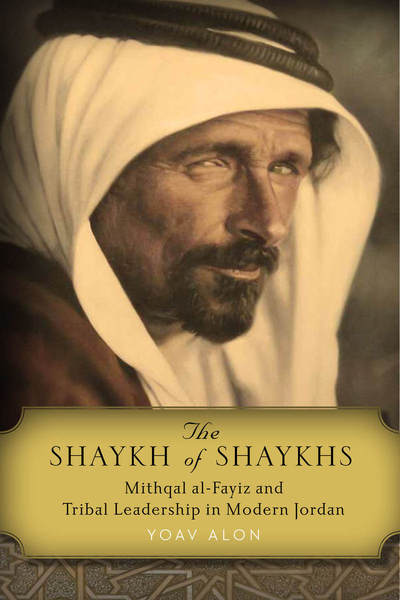 Shaykh Mithqal al-Fayiz's life spanned a period of dramatic transformation in the Middle East. Born in the 1880s during a time of rapid modernization across the Ottoman Empire, Mithqal led his tribe through World War I, the development and decline of colonial rule and founding of Jordan, the establishment of the state of Israel and the Arab-Israeli conflict that ensued, and the rise of pan-Arabism. As Mithqal navigated regional politics over the decades, he redefined the modern role of the shaykh.

In following Mithqal's remarkable life, this book explores tribal leadership in the modern Middle East more generally. The support of Mithqal's tribe to the Jordanian Hashemite regime extends back to the creation of Jordan in 1921 and has characterized its political system ever since. The long-standing alliances between tribal elites and the royal family explain, to a large extent, the extraordinary resilience of Hashemite rule in Jordan and the country's relative stability. Mithqal al-Fayiz's life and work as a shaykh offer a notable individual story, as well as a unique window into the history, society, and politics of Jordan.

Yoav Alon is Senior Lecturer in Middle Eastern History at Tel Aviv University. He is the author of The Making of Jordan: Tribes, Colonialism, and the Modern States (2009).

"Yoav Alon removes Shaykh Mithqal from the realm of Orientalist stereotype and rightfully places him at the center of Jordanian history. Mithqal was a complicated, charismatic man, and Alon shows us how he thought and maneuvered, how he adapted to radical socioeconomic change, and how he lived in public and private. Vividly told and grounded in meticulous archival and oral historical research, The Shaykh of Shaykhs will transform the way we understand the tribal leaders who shaped the contemporary Middle East. A rare and fascinating study."

"An outstanding study of leadership and authority in Bedouin society. Mithqal was one of the last great Arab shaykhs, and in Yoav Alon he found the perfect biographer. A remarkable achievement."

—Eugene Rogan, University of Oxford, author of The Arabs: A History and The Fall of the Ottomans: The Great War in the Middle East

"The Shaykh of Shaykhs is remarkable, persuasive, and a good read. Yoav Alon persuasively spells out how understanding tribal leadership in Jordan's past remains essential for understanding the political and social realities and constraints following the 'Arab Spring.'"

"In telling Mithqal's story, Alon strikes a delicate balance between empathy and objectivity. His account is entertaining, full of anecdotes and fsacinating personal, political and sociological details."

"Alon has done an outstanding job....The many anecdotes with which Alon peppers the story make this book a joy to read. In fact, while this is a book that will certainly offer a lot of new information to scholars of Jordanian tribal life, it is written in a very accessible way."

"[A] well-written and often richly descriptive picture of the patriarch of one of Jordan's most notable political families that serves as a lens for both specialist and nonspecialist readers to consider the crafting of a state, the narratives that are made to frame it and its modernity, and the intersection of interpersonal and state politics in both....With The Shaykh of Shayks, Yoav Alon has given us another piece of critical scholarship with which to foster better, critical understanding of complex histories with immediate relevance."

Yoav Alon's "The Shaykh of Shaykhs"

My Book, The Movie
How Jordan's 'sheikh of sheikhs' negotiated with Zionists, founded a kingdom

The Times of Israel
Recommended